His name is Leon Bear Stern, and he is magnificent. 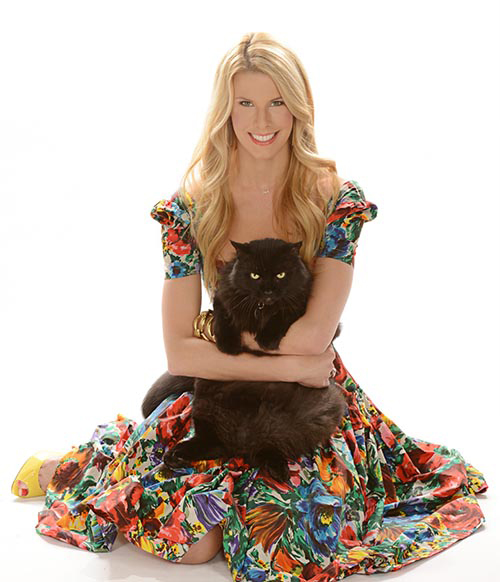 In fact, if you were to imagine an archetype of “the black cat,” you’d probably picture someone like Leon Bear — dignified, regal, confident, intelligent, and wise. And his luscious black coat is one of the most glorious things about him…that and his bodacious belly.

But for reasons I find ridiculous, people have singled out black cats like Leon and ascribed all kinds of mysterious powers to them. Since the Middle Ages, black cats have been associated with witches, as in Halloween. Because of this ludicrous idea, these poor animals were killed in horrifying ways and in huge numbers for years.

On the other hand, in Scotland, a black cat showing up at your door means prosperity. In fact, in all of Britain, and in Japan, black cats are said to bring good luck — including the belief that a woman who lives with a black cat will have lots of “suitors.” (I guess this could be either good or bad luck, depending on the quality of the suitors.)

And just to make things even more absurd, in Germany, if a cat crosses your path from right to left, it’s back luck. But if the cat crosses from left to right, it’s good luck. Or maybe it’s the other way around…

Personally, I agree with this great quote attributed to Groucho Marx: “A black cat crossing your path signifies that the animal is going somewhere.” That’s it. Plain and simple. No meaning beyond the obvious.

Unfortunately, the obvious hasn’t always worked in favor of black cats, who are clearly beautiful, fun, charming, and perfect companions. Despite their silky coats and great personalities, black cats are often overlooked in shelters and are frequently the last be adopted. That senseless superstition just won’t let go.

Well, at my house, black cats rule, especially Leon Bear. And like all cats of any color, Leon has a story that makes his life even more fascinating — and my love and respect for him even deeper. 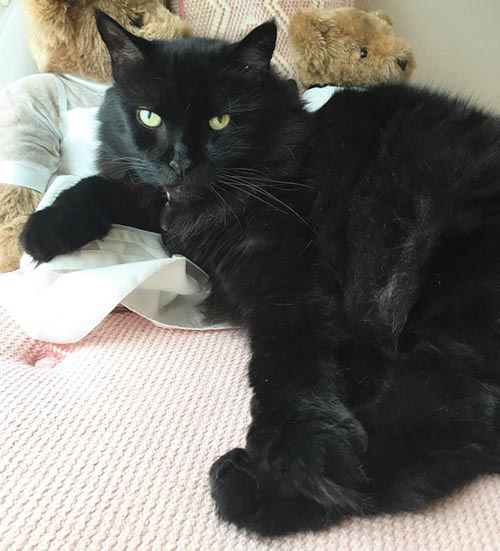 In the spring of 2011, a series of fierce tornadoes devastated several communities in Alabama. My colleagues at Animal League America deployed their Emergency Rescue Team to the area multiple times to coordinate rescues and eventually bring unclaimed pets back to Long Island for a second chance.

One of those animals was a 20-pound feline. The North Shore team had found him wandering through the rubble after the storms had demolished the shelter he’d been living in, killing almost every pet inside. But this hunk of love was a survivor, and Howard and I were thrilled to adopt him and make him our own. Since then, Leon Bear has been the king of his domain, watching the parade of beautiful foster felines — of all stripes and colors — that’s passed through our home during the past two years.

In recent months we’ve nurtured an incredible batch of kittens and cats, many of them black and all of them with stories of their own. Gentle soul Violet, darling Daphne, yummy Plum, Cosmo (who needed so much medical care and is worth every eye drop and more), Dear Prudence, Little Bear with his fuzzy grey belly, darling Clarabelle, dreamy Mr. Moonlight, and Sparrow, an elegant adult who found the perfect family to care for her. And I will never forget Wilson — no eyes but a full heart — and Jellybean, who now shares life with another black cat named Mickey. 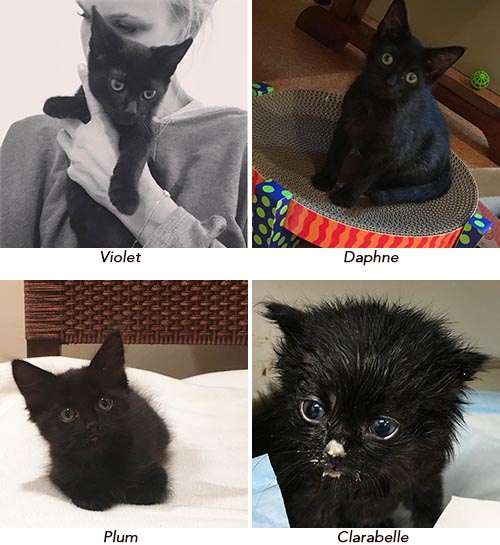 I am so pleased to be able to showcase these perfectly sweet cats and help dispel the myths that surround them. Black cats are simply cats, no more or less magical than all cats are. I think every home should have at least one black cat. They’re like the classic little black dress: always in fashion and perfect for everyone.

So if you’re thinking about adopting a new feline friend, check out the black beauties, especially the adults. You’ll never regret the love and light they’ll bring into your life.

P.S. Not long ago, I saw an online posting of a handsome little ginger kitten that brought me to tears. He was in an overcrowded Manhattan shelter — his eyes rimmed in red and swollen shut — and he was on the “Urgent: To Be Destroyed List.” With help from Animal League America, we pulled him out of that shelter, off that awful list, and in short order he joined my fosters. Howard named him Jasper, and after lots of medication, eye drops, and TLC, he not only survived but thrived. And lo an behold, he became best buddies with Cosmo, one of our black kittens who also needed special care. It was a long journey, but on September 8 Jasper was ready to fly. He and Cosmo were adopted together by a wonderful young woman. And all I can say is, what a story! Jasper, who was on his way to being destroyed, now has health, a loving new home, and a really cool new name: Lennon. I’m so grateful to be on Animal League America’s team and thankful we could save one more precious little life together. 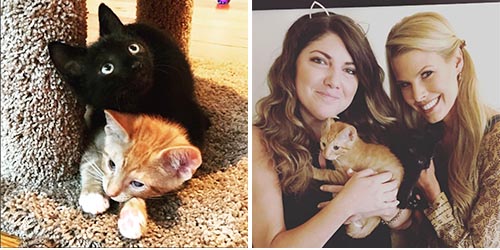