Meet Apollonia! In 2019 a local municipal shelter was called in for an emergency rescue, and asked our Rescue Team for support. Found in a hoarding situation, five frightened cats were brought to the safety and comfort of North Shore Animal League America. The only female of the group, Apollonia, was emaciated. At first we estimated that she was only a year old until we determined something else was at the root of her small stature: irritable bowel disease. She was actually closer to seven years old! 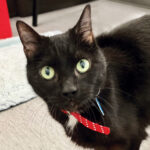 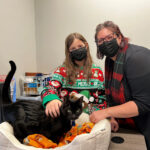 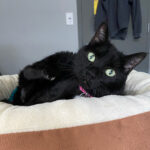 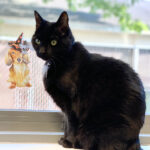 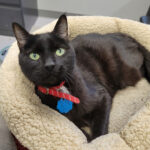 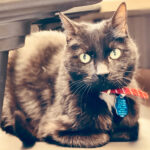 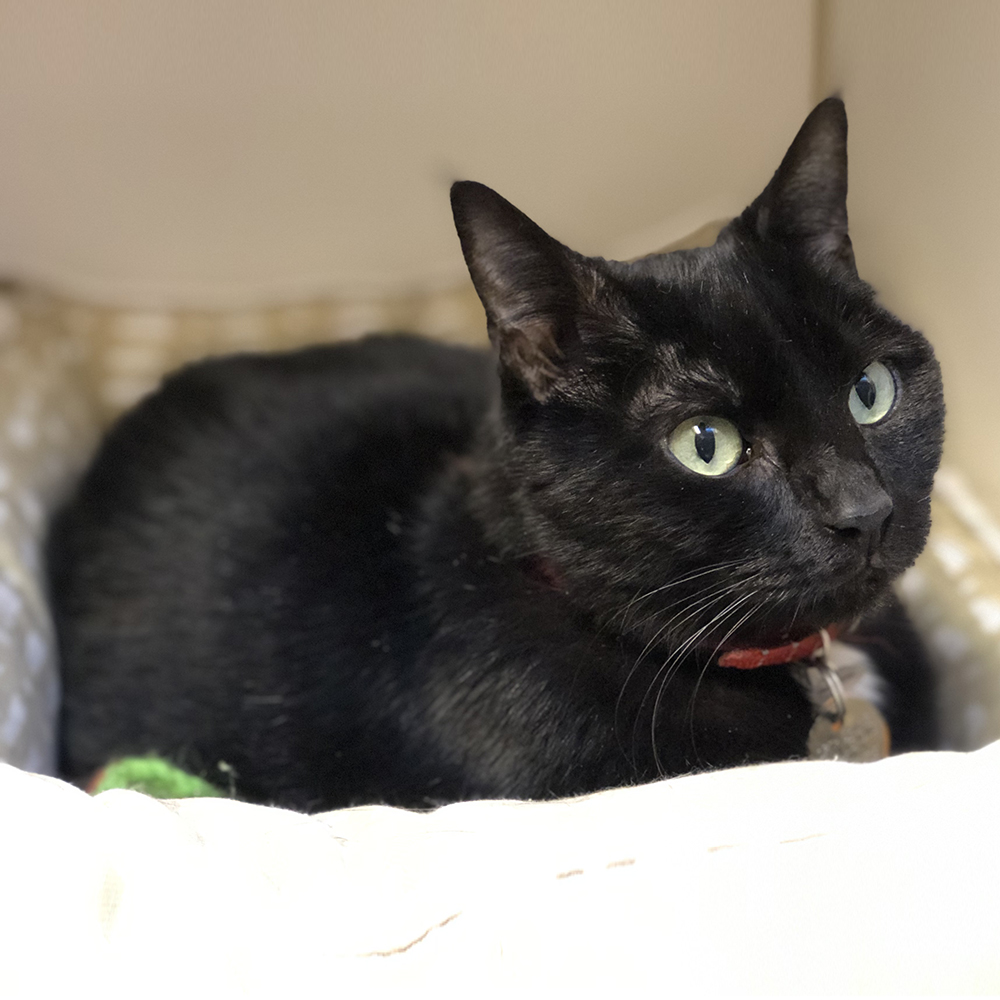 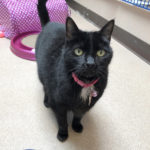 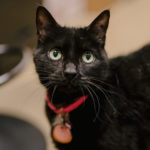 While working on a plan for her physical and social success, our team discovered many layers to Apollonia. Once safely away from other cats, the pigeon purrs and headbutts poured out of her, and we now realize how stressful life in a house with many cats was for her. Apollonia will never have to fight for resources again. With the help of her Sponsors, we can ensure her family the support they need so they can focus on spoiling her to make up for the hard life she left behind.

Apollonia has experienced some medical issues, but thankfully has the support of her mom Melissa and the team at the Pet Health Centers. There is concern she may have had a stroke, but according to Melissa, through it all, “her personality and spirits are high. She loves to snuggle and will sleep on you for hours if you let her.” She is also still the purring machine that everyone at Animal League America has grown to love. We hope you get better soon, sweet girl!

Apollonia, with her melodic pigeon purrs, is finally in the home of her dreams. Says mom, Melissa, “My daughter and I have been loving on Apollonia since the day she arrived! She is the sweetest soul ever!” Though she still needs help monitoring her IBD, her medicine is keeping her healthy. Apollonia is always full of snuggles and loves to play. Melissa acknowledged it’s a perfect match: “We couldn’t have asked for a more perfect fit for our little family.”

Apollonia was winning hearts in the offices of Animal League America with her sweet disposition and adorable pigeon purrs. Senior Volunteer Manager Victoria Gravina reported, “Apollonia is ALWAYS purring! She has also been busy exploring different offices and making new friends.” In fact, Apollonia’s melodic chirps finally caught the notice of her ideal adopters. We are so pleased to report that of this printing, she’ll be leaving the conference room for a cozy home of her own! Congratulations to everyone who supported Apollonia in making this happen.

While Apollonia waits for loving adopters to bring her home, she continues to be an adored Animal League America office mascot. “Apollonia is doing well,” reported office-mate Victoria. “She is pigeon-purring away, and is always keeping me on task. She is the absolute sweetest girl in the world.” This regal beauty is grateful for the peaceful space we have provided, but we have every confidence Apollonia will soon find a family committed to devoting their whole hearts to her.

Apollonia was recently returned to Animal League America after her adopter could no longer care for her, however this eight-year-old mush has been quickly promoted to the very important role of Volunteer Office Cat while she waits for a new home! Apollonia ensures that the department runs smoothly and keeps Senior Volunteer Manager, Victoria Gravina, on task by sharing pigeon purrs of motivation. According to Victoria, “Apollonia loves meeting new people and makes all visitors feel welcome!

Apollonia likes to be queen of her home wanting all the attention herself — especially from human brother, Evan. She gets along well with Kristie, Evan’s service dog, a big Labrador Retriever. Anytime she hears activity going on in the house, Apollonia is in the middle of the action. She’s very playful and loves to “sing,” as her mom Elena likes to say. Evan and Apollonia have a nightly routine: Evan lays in his bed, while Apollonia is in her bed on the floor next to him; he then pets her while she happily purrs away. Every once in a while, Apollonia has some diarrhea and she is seen by the veterinarians at Animal League America and given the medication that soothes her system. During her last veterinary visit, blood test results were normal. Elena is grateful to Apollonia’s Sponsors and so glad they have her to enrich their lives.

Apollonia’s irritable bowel syndrome is under control right now with her high protein and no-grain diet. She does have some medication for when it flares up. Her mom, Elena, says she has to feed her in small portions throughout the day because she will just eat and eat and eat until she throws up. Elena wonders if that behavior stems from Apollonia’s time in the hoarder house where she was found. She’s really bonding with human brother, Evan, who pets her at night and they fall asleep together. One of the reasons they adopted Apollonia was that she’s very tolerant of the way that Evan pets her — he’s a little heavy handed because he has cerebral palsy. He is so happy with his “Apple” as he calls her. Apollonia even gets along with Evan’s service dog, Kristie, a big Labrador Retriever. Since the onset of the pandemic, Elena has felt that her son was isolated in the house even more than usual since he couldn’t even go to school. She believes that both Apollonia and Kristie helped fill that void a great deal. We all know how well animals will do just that.

Apollonia is happy in her home with her human brother, Evan, and mom Elena. She just loves when Evan pets her and stretches out on the floor. She had a bout of vomiting and some diarrhea recently and came in to be checked by a veterinarian at our Pet Health Centers. The veterinarian was not sure if this was caused by a flare-up of her irritable bowel syndrome, but gave her mom some medications to soothe her system. Sometimes when she eats her special food too fast, she regurgitates it. Apollonia’s family will be monitoring her closely and, of course, giving her love and cuddles.

Apollonia is feeling more and more at home with her new family every day. To ease her into family life, she was confined to one room, but for only one day. Apollonia made it clear that she didn’t want to be separated from anyone. She’s not afraid of the dog and they each respect each other’s boundaries. She feels safest under her human brother, Evan’s bed, but she has a new bed placed nearby. “Everyone is in love with her,” says Elena, Apollonia’s new mom. “Apollonia is a joy and an angel.” She purrs and sings while she’s being pet and stretched out on the floor. As soon as she hears activity in the house, she comes out to play and is friendly with visitors. She didn’t seem to like her food at fi rst but now she’s eating well and her digestion issues have been stable.