Meet Sonic! Sonic was rescued in 2012 from a shelter that needed assistance. 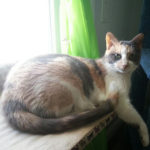 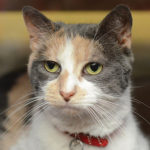 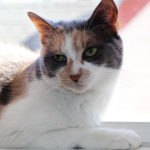 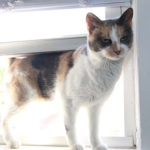 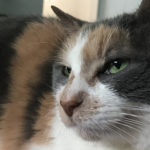 She was a 3-year-old cat that wanted nothing but affection; she loves to cuddle and is extremely friendly. From her appearance, you wouldn’t think that she had anything medically wrong. But, Sonic was diagnosed with a mild heart murmur and inflammatory bowel disease. Sonic requires a special diet to treat her condition and if she has occasional disease flare-ups an oral medication is required.

Sonic has plenty of furry and human friends here until she is taken home by the perfect adopter to be forever cherished. With the help of generous monthly Sponsors like you, Sonic will live out the rest of her days as healthy and happy as possible. We are honored you have chosen to be her Sponsor Program Pet Parent – thank you!

It’s with incredible sadness that we report the passing of Sponsor Pet, Sonic. She died peacefully in one of her favorite spots, her human dad’s pillow. Though she had a clean bill of health otherwise, her little heart could not keep up. We celebrate her life and grieve along with our Sponors and, of course, Sonic’s dad, Adam. In Adam’s own words, “I still love that cat to high heavens and she will always be with me. I want to thank you for the work you are doing for the Sponsor Program at North Shore Animal League. It’s difficult for me to put how much value I have gotten from Sonic, and the program overall, into words.” And we thank YOU for making her happy existence possible.

Sonic is her name and adventure is her game. Sonic has always been a curious cat and she lives up to that reputation in her home, especially since moving across the country to northern California with her dad, Adam. Whether she’s watching the birds and squirrels from the windowsill, playing with her many toys, or rubbing against his human pals for head butts, Sonic is always in search of her next adventure. Her new home is a beautiful log cabin, in which Sonic has free reign to explore. It also comes equipped with sixteen beds for her to occupy whenever she gets tired. Sixteen beds! Who has it better than this spoiled kitty?

Sonic has adapted quite well to her new home in California. She and her feline brother Big Red are the best of buds, curling up together in front
of the window to enjoy the beautiful West Coast sun. Sonic has certainly shown her human dad that life with a four legged friend is ALWAYS better
than the alternative. Because of the love and support of her amazing Sponsor Parents, Sonic couldn’t be in a better place. If she could thank
each and every one of you with the purr-fect kiss, she surely would.

Sonic is now a California Kitty! She’s living in a gorgeous log cabin and is really enjoying the country life. She and her brother Big Red have become much closer since they’ve moved – they’ve been caught snuggling on numerous occasions. Sonic’s dad wakes up every morning with Sonic curled up in a little ball right next to his pillow. He says that Sonic has been instrumental in keeping her dad sane in the three years they have been in each other’s lives. And he adds that tears fill his eyes knowing that she has made such a significant impact in his life. He works hard every day to make sure he is doing the same for Sonic.

Sonic still holds sway over her fur-siblings Luke and JJ – after all she is the Queen of the household, as her family members always remind us! Like the royalty she is, Sonic continues to let everyone know how she’s feeling and what she wants with loud purring and little bird-like chirps. And if she could, she’d chirp to her Sponsors “I love you too!”

Sonic is all set for warmer days just like the rest of us. Whether it be basking in the sun in front of the backyard door, snooping around new groceries on the kitchen table, or snugging up on the tippy top of the recliner, Sonic has really gotten used to her new digs after the big move from North Carolina. Her furry siblings, massive Mutt-i-gree Luke and Shih Tzu/Poodle mix, JJ, still provide her with hours of entertainment. All of the animals in the house know that ultimately, Sonic is the Queen! Sonic can’t thank all of her sponsors enough for their love and support!

Sonic continues to reign as Queen Meep of the house with her canine and feline royal subjects happily serving her. She is in good health with her heart murmur now stable and hasn’t had any irritable bowel trouble. Sonic and her family can’t thank you enough for your charitable monthly help.

Queen Meep loves spending time with her three brothers Michael Ian Black, Colossus, and Jalopy. She’s happiest in the sunshine, and loves to play in the water bowl. She also likes chasing fake mice and enjoys a good catnip toy. Her family feels very lucky she’s part of their clan and thank all her sponsors for their love and support.

Sonic, now Queen Meep, was adopted in June and moved with her family to Winston-Salem, MA where she gained two feline brothers. She loves ruling the roost as the only female cat, and really takes her name seriously. She’s no longer shy and reserved and has taken quite fondly to humans. She spends her days planning sneak-attacks and take-downs on her youngest brother Jalopy. When she isn’t playing, she can be found sunning in her favorite window. Her family is happy to have her as a part of their brood!

Sonic is now in a foster home, and things couldn’t be better for her! Her new mom, Sam, tells us Sonic has won herself the name Queen Meep for the chirps she greets her family with when hungry, happy, or even cranky. Her mornings start bright and early at 6:25 AM even though breakfast isn’t served until 8, when she begins waking the house…starting with her diabetic brother, Colossus – who was also adopted from Animal League America. Post-meal she spends her days lounging in the sun, chasing any fake mouse she can find, and constantly begging Sir Sleepy Headed Big Bro to join in on the fun (which occasionally he does). Her mom and dad are so thankful to Animal League America for allowing them the opportunity to adopt her, and Colossus is so grateful to have a sister!

Sonic is living quite the luxurious office cat lifestyle here at Animal League America. Thanks to a generous donation, her room got an upgrade fit for a queen. The change seems to suit her well. She’s been maintaining a healthy weight and is as happy as can be. She’s incredibly affectionate and demands attention when she’s not busy sunning herself. During the day she gets to roam between her room and an office to spend time with some of our staff. While she has yet to learn to answer phones, the staff enjoys having her company until she finds the perfect forever home.

Sonic is enjoying extra quiet time since one of her feline roommates moved out. In the meantime, she gets to have her favorite windowsill all to herself – she likes to admire the activity outside. As always, she greets any visitors with a happy meow and a request for brushing.