The Month of the Sparrow 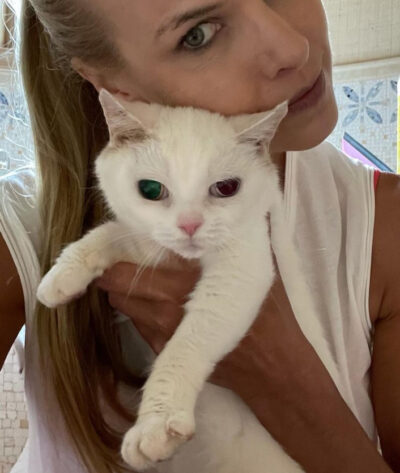 But for me, this month is special for another reason: I will always think of August as the Month of the Sparrow.

The Sparrow I’m thinking of is not a little brown bird, but a small, delicate, and courageous white cat whose story will always haunt me and whose spirit will always inspire me.

Sparrow was rescued from a brutal breeding situation. She and six other purebred cats were found crammed into a small cage with powerful heat lamps beating down on them 24 hours a day, seven days a week. At one point, the woman responsible for this outrage had to go into the hospital and left these vulnerable young animals alone in that cage, with no food, water, or litter… for nearly nine torturous days! One of the cats, a male, died. I saw him on the video that the rescuer sent me, and it simply broke my heart. In fact, I was so devastated when I learned about this hideous situation from my partners at Long Island Veterinary Specialists that I immediately accepted all five survivors into my program.

Each suffered serious permanent damage from this deplorable abuse, including loss of vision, either partial or total, including Sparrow (below), who is blind and deaf because of what she endured. She needed a lot of extra support, and so she stayed with us longer than the others as we worked to bring her out of her shell and back to life. 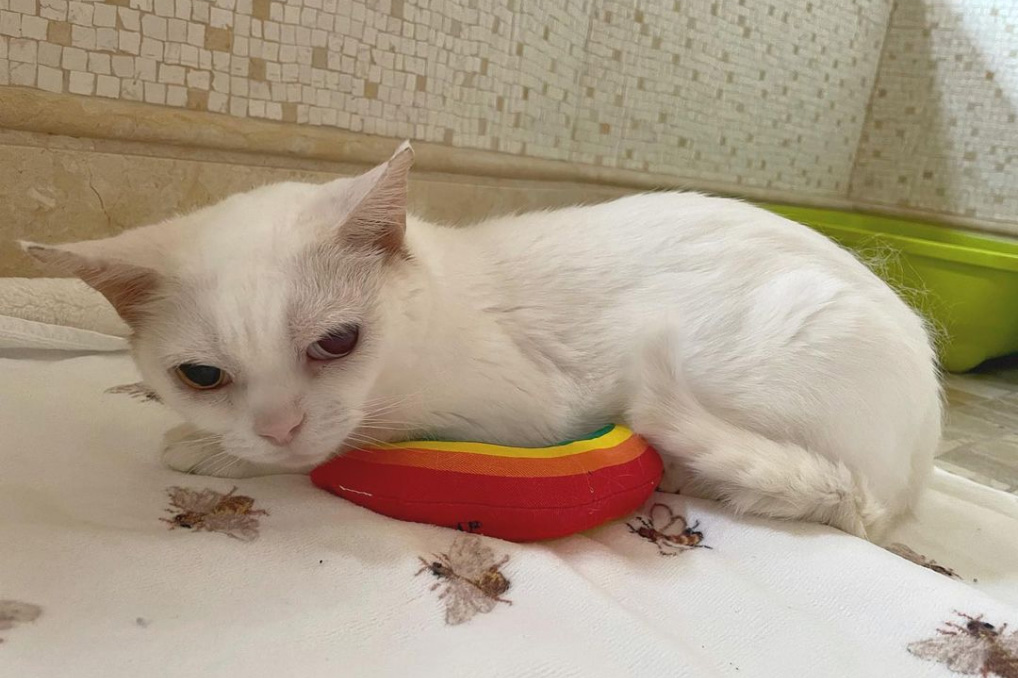 Howard named her Sparrow, which is such a beautiful, soulful name. The word also has Biblical and spiritual connotations. In the New Testament, for example, the sparrow represents God’s concern for even the smallest, most insignificant living things. Sparrows are also very common birds. I’ve read that there are more than 35 types of sparrow species in North America alone — so many that birdwatchers often refer to them collectively as little brown birds, or LBB for short. 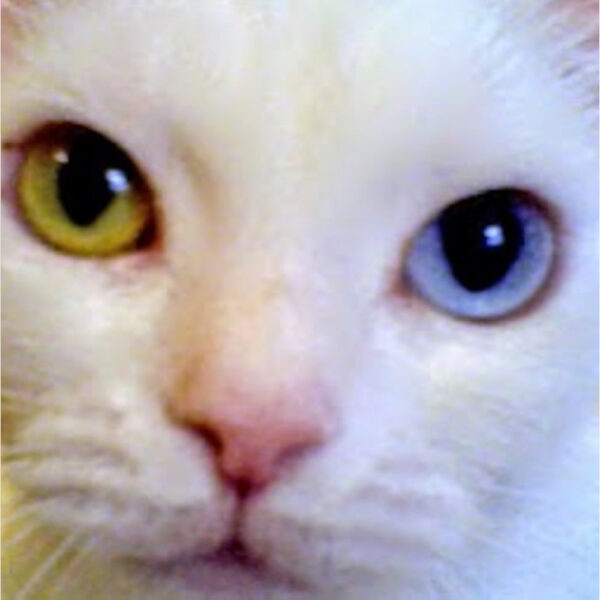 I learned more about the cats rescued from the abuse: They were being kept in deplorable conditions and were being bred for profit. Then I found Sparrow’s photograph on the “for sale site,” before her eyes were burnt and blinded. This is the face of the kitty she was meant to be, and it is the saddest image of all. It will haunt me forever.

But “insignificant” and “common” are definitely not words that come to mind when I think of our beautiful Sparrow. She is a rare little jewel, with gorgeous eyes, one green and one blue. (This is called heterochromia, by the way.) Her lovely white fur has thickened and filled in, and although she can’t see or hear me, her sense of smell is especially acute, and she definitely reacts to my presence — maybe it’s our shared vibrations — and she loves to be held and touched. 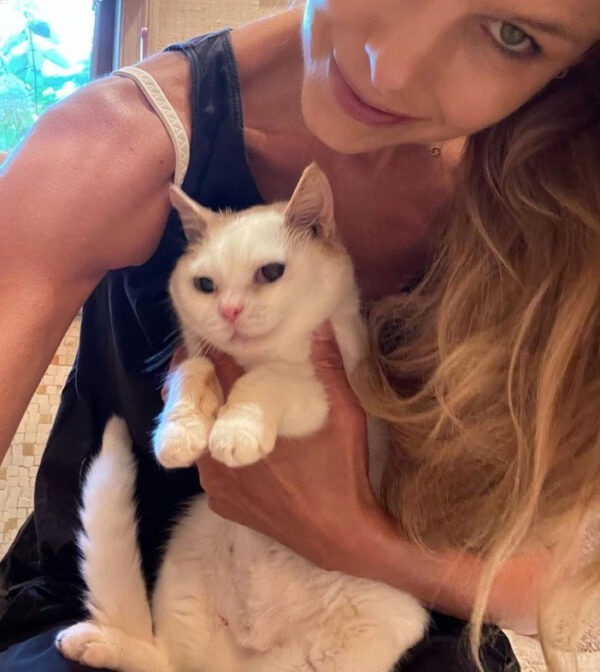 Sparrow shows off her sweet kitty belly and her Mona Lisa smile.

She eats four cans of wet food every day and has developed a perfect little belly, which she loves to have rubbed. She also loves to be brushed, and she plays by sniffing her toys and feeling them. In other words, she’s perfect. 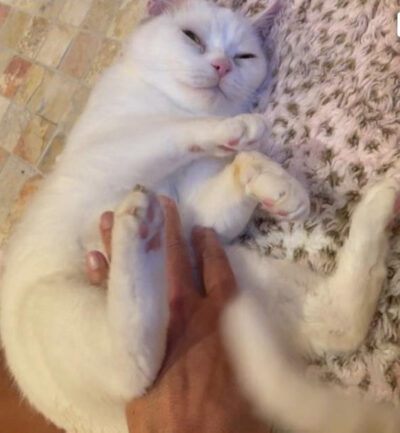 Sparrow is also a very good, patient girl, and since her arrival she’s made tremendous progress. I have to give her ear drops twice a day in her bad ear. That ear drum is still ruptured, but I’m hoping it starts to heal soon. We resolved the infection in the other ear, and at one point I’d hoped that she would hear again. But tragically, that wasn’t to be.

The videos and pictures from that rescue give me nightmares. I have a very strong connection to Sparrow, and sometimes when I sit with her, I go to a really dark place and can’t stop crying. But I know she knows that I’m here to help her heal.

But still, all this pain because of human abuse. It sickens me. And what truly haunts me is that Sparrow and her mates were healthy, normal cats before they fell into the hands that despicable abuser. And why did this happen? For profit! 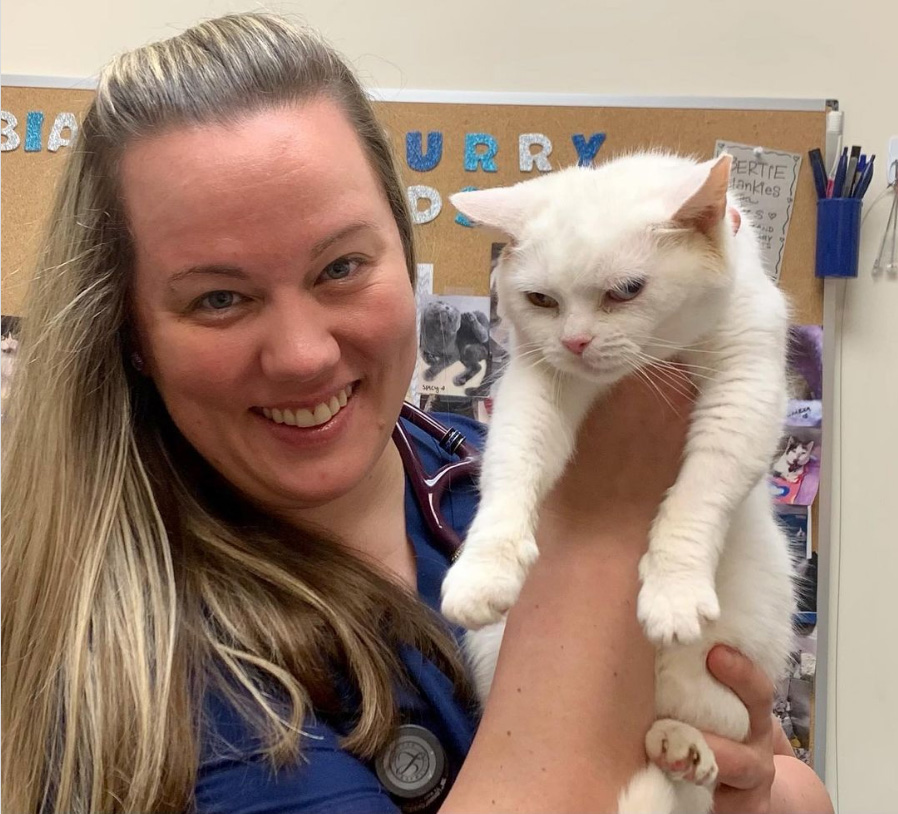 Dr. Jackie was so pleased about how much weight Sparrow had gained and how great she looked during her checkup.

I’m so grateful to all the people whose teamwork saved these wonderful cats, beginning with the two amazing women who rescued them, along with the other organizations that welcomed the several other cats at the site who were not in the cage but also needed help. And of course, Dr. Jackie and her colleagues who were there to receive them and provide medical help. I feel honored to be part of this compassionate group, and the thought that we far outnumber that vile abuser brings me hope and comfort.

And I’m so grateful to my “Instagram friends,” who, like me, have fallen in love with Sparrow. Their affection and encouragement mean so much to me, not only with Sparrow but with all my fosters. I don’t think I could keep doing what I’m doing without the energy and encouragement of this community.

However, one thing bothers me a lot, and that’s when some of my IG followers tell me to adopt kitties like Sparrow. Honestly, it hurts, because cats like Sparrow need their own special family to care for them, and that’s not what fostering is. There will always be another who needs me. And besides, Fostering is a “bridge,” not a “forever.” The goal, as always, is adoption. 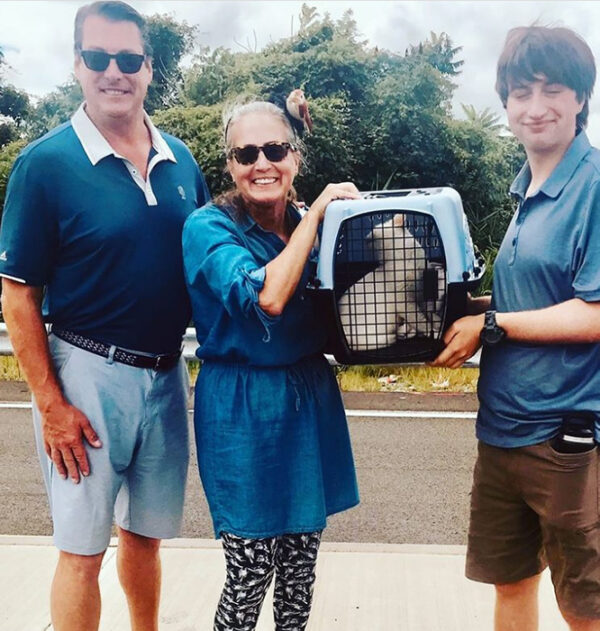 And we reached that glorious goal for our brave little Sparrow on August 27, her adoption day. It was her time to fly! She was ready…maybe more ready than I was…and yet it was a thrill to send her off to her beautiful future. She taught me so much, and I thought about a line by the poet e.e. cummings: “May my heart always be open to little birds who are the secrets of living.” 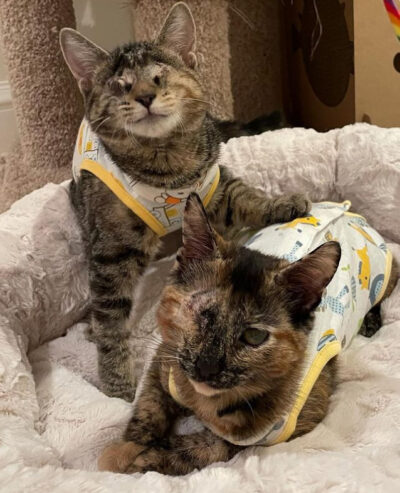 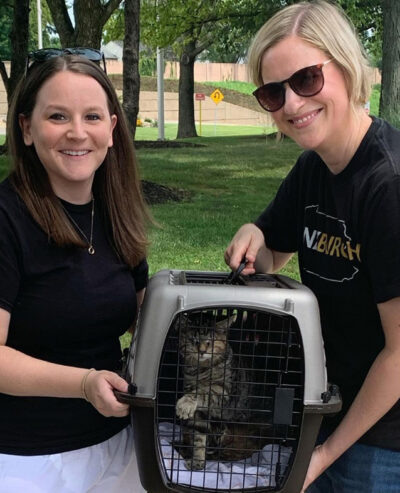 And there were many wonderful adoptions during the past few weeks, all of them so special. I was thrilled that bonded pair Jamie and Kelly (left) went home to my hometown, Pittsburgh! Jamie had to have both of her painfully damaged eyes removed and Kelly lost her right eye. (Thank you, Dr. Kim!) They are now called Ruby and Raz and are thriving with a fabulous animal-loving family.

My heart is full.

P.S. A very sad postscript. Among the cats rescued from that ghastly heat lamp abuse was Prince, adopted by a fantastic family and renamed Chance. Besides being blind, he also had serious kidney disease. I type the word “had” with a heavy heart, because after only 42 precious days in his perfect new home, Chance died from complications of his kidney condition, all caused by human neglect and greed. His family was with him and did absolutely everything possible to save him. My only peace is that he felt the love of his family for those few sweet weeks. 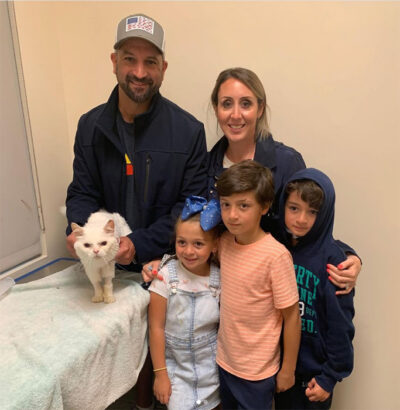 RIP Beautiful Chance. You were deeply and forever loved.
(Shown here on adoption day, and in the arms of love.) 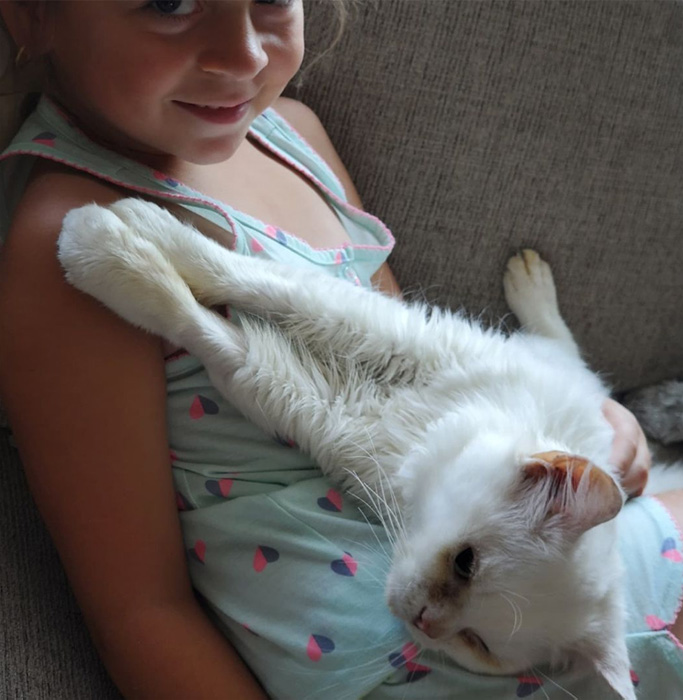 P.P.S. This September, North Shore Animal League America’s virtual Walk & Wag will give you a chance to have fun, get some exercise, and raise funds for all the animals at NSALA…and they need your help now more than ever. There’s also a virtual 5K run if you’re up for it! Visit www.animalleague.org/walkandwag for details and info about all the special features participants will enjoy.