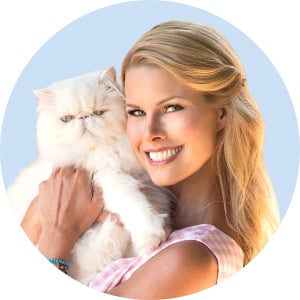 Beth helps focus national attention on the plight of shelter animals, appearing on so many TV and cable shows to help spread the word about shelter adoptions.

Beth also helps behind the scenes, lending a hand to our rescue team as they take animals from our Mobile Adoption Units to our medical facility. Beth’s passion for the animals is truly unmatched — she even ran a 26.2 mile marathon to save lives.

New Year, New Lives to Save

People say that 2020 is the year we all want to forget...but will always remember. It’s true: 2020 was tough. But despite the challenges, I find myself remembering many of the year’s surprising silver linings, like the people who decided to make working from home truly meaningful by fostering homeless pets. And then there were all those great adoptions.

His name is Rudy. He’s technically homeless, but he eats several meals a day, usually beginning early at our house and then sauntering next door for another meal. He’s no dummy, and he seems content with his life. Still, whenever I walk by our mudroom door and see a big orange head looking in, I open the door and ask him to join our indoor family. He always refuses, but I’ll always keep asking!

One Year and So Many Lives

It began with an English Bulldog named Bianca, the most charming dog ever. When she died on July 17, 2012, our hearts were shattered, and we wondered if we could ever heal. When Bianca died, we also had three rescue cats in our home, Walter, Apple, and Leon Bear. They were Bianca’s original furry friends. I admired their unique relationship so much that I felt inspired to do something in Bianca’s name for homeless cats and kittens.

If you think about it, all of my fosters have the same special need: the need for a loving home. But some face extra challenges too. By most standards, these cats and kittens are not “normal.” Something is “wrong.” Amazingly, they don’t seem to notice their differences.

Forever in Our Hearts

Everyone who does animal rescue sooner or later encounters animal abuse. The horror and heartbreak are sickening. But we should not feel helpless in the face of it. Instead, we must speak up for the voiceless animals who suffer at the hands of sadists and monsters.

I am a very lucky person in more ways than I can count. And among the luckiest things in my life is my wonderful family, which always included animals. In fact, my parents firstborn was a Collie mix named Suzie-Dog, and we treated her as a member of our family — because that’s what she was.

“Every adult foster takes a piece of my heart… Their eyes say thank you.”

It’s still kitten season, of course, and my house is filled with adorable nuggets who need loving homes, and my Instagram is filled with beautiful kitten adoptions. But this month, I decided to dedicate my blog to my adult fosters whose resilience always moves me so deeply.

This is Bubba, my new boyfriend, my current crush, the ONE…at least for now…because by the time you read this I might well have another new boyfriend. Just before Bubba, it was Jerome. And before Jerome, there were others, many others. I can’t help myself.

If there’s one thrilling silver lining to COVID-19, it’s the positive effect it’s having on Mother Nature. The message is clear: nature is willing and able to rejuvenate itself. All we have to do is recognize our role for both good and bad and step aside, even a little, and things will improve. Planet Earth has a lot to teach us about hope and resilience.

A Shelter At Home

Life has never felt as fragile as it does right now. Everything has changed, and I keep wondering what the world will be like a year from now. But it doesn’t pay to look too far ahead these days, so I’m trying to stay “in the moment.” And with every moment I give thanks that I’m safe in a home that I love, with Howard, our sweet resident cats, and all of my beautiful fosters. To be honest, I’m jealous sometimes of how innocent these cats and kittens are, blissfully unaware of the terrible state of the world.