2018 Get Your Rescue On® Gala Rocks Manhattan

On Friday, November 30, we rolled out our blue carpet to celebrities, puppies, and kittens alike at our 2018 Get Your Rescue On® Gala. The list of luminaries included honorary co-chairs Beth and Howard Stern, actress Kathryn Erbe, comedian Lisa Lampanelli, and reality TV star Carole Radziwill, to name a few. But the real stars of the night were the adorable and adoptable puppies and kittens in attendance.

We held the event at Pier Sixty at Chelsea Piers, one of the most glamourous venues in Manhattan. Nearly 400 friends and donors came together to honor the dogs, cats, puppies, and kittens we rescued in 2018 and to support a future of even more lives saved.

Joe Gatto, rescue advocate and one of the stars of TruTV’s hit show “Impractical Jokers,” hosted the event, entertaining the crowd with charming stories about his wife, his two young children, and all five of his dogs each named for an Italian pastry, including Zeppole, a one-eyed senior dog he adopted during our 2017 Global Pet Adoptathon®. (We’re sad to report that Zeppole passed away shortly after the Gala.)

Other highlights from this unforgettable evening included eloquent remarks by our National Spokesperson Beth Stern and a dynamic performance by iconic Rock and Roll Hall of Famers and animal rights activists Joan Jett & The Blackhearts. Their performance brought the crowd to its feet and truly rocked.

Scenes From the Blue Carpet

In addition, we presented our inaugural Humane Leadership Award to Mutt-i-grees Ambassador McKinney (Mac) Meek, a 17-year-old high school student from Kentucky. Later in the program, we gave our Crystal Collar® awards to Tito’s Handmade Vodka in honor of their support and commitment to animal welfare, and to radio personality Elvis Duran, who uses his coast-to-coast morning radio show to promote rescue and adoption.

Important lifesaving funds were generated through the live and silent auctions, along with a record-breaking pledge drive. Funds raised will support our capital campaign for Bianca’s Furry Friends Feline Adoption Center (BFF), a state-of-the-art facility now under construction on our campus in Port Washington, N.Y. This effort, spearheaded by Beth and Howard Stern, expands our existing Adoption Center and furthers our no-kill mission.

Everyone agreed that the evening’s most emotional moments centered on a video featuring hurricane relief and animals we rescued, nurtured, and found homes for in 2018. Their poignant stories represent all the pets you, our donors, help us nurture and make whole. So whether or not you attended the Gala, your support and compassion were front and center. Thank you!

Thank You to Our Sponsors

Get Your Rescue On® 2018 Gala Digital Journal 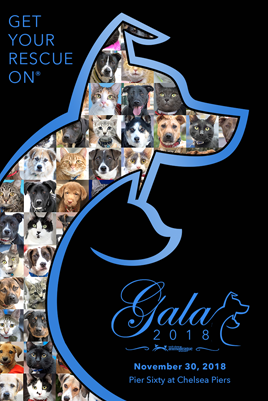 View our interactive digital journal to learn more about all we do at North Shore Animal League America, and the generous people and organizations who support our no-kill mission throughout the year.