Meet Bobbi! He was seven years old when Bobbi’s life was turned upside down and he was admitted to North Shore Animal League America’s Pet Health Centers for acute symptoms of feline lower urinary tract disease (FLUTD). Then he was abandoned by his owner. We made a promise to Bobbi that he’d be safe and his next home would be his best yet. 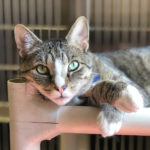 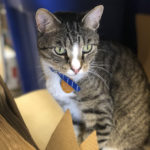 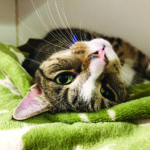 Once our wonderful medical staff had him back on his paws, Bobbi’s high energy antics kicked into full gear and his impish personality now delights everyone he meets. Bobbi loves to leap to the highest perches in our Adoption Center and can be found frolicking with kittens while playing with toys, but his favorite pastimes are gazing out the window and basking in a sunbeam. Until now his FLUTD was a deterrent to an adopter who might hesitate to take on the cost of a special diet, but thanks to our Pet Sponsorship Program, the financial burden is taken away, and a family can fully invest in offering their windows for this delightful boy to dream by.

Your support of Animal League America’s Pet Sponsorship Program will ensure that Bobbi, and all the Sponsor animals, will be cared for and loved unconditionally.

The past year has been difficult for Indy’s mom, Rachel, and Indy helped her immensely with the anxiety and depression that she sometimes suffers from. He has been her company, providing cuddles and love first thing in the mornings. Of course, the cuddling is on his terms! “Indy trusts me, and I am so glad to be that person for him, as he is always there for me,” says Rachel. With that trust, his personality now shines through. It hasn’t been an easy process, but she “doesn’t mind the hard moments of him being scared, we take things one step at a time.” They love to play together and Indy has a fishing toy that he delights in and it’s now his favorite. He had his regular veterinary exam recently and has no new medical issues — his feline lower urinary tract disease is being managed through his special diet.

Bobbi (aka Indy) has moved to Connecticut with his mom, Rachel, and he’s been adjusting well. Bobbi’s mom got a job as a teacher and is very excited about her new opportunity. Her bedroom has built-ins and a lot of shelves and he loves to climb all over them and even sleep in them! Rachel is so proud of how far Bobbi has progressed with his socialization. She feels that sometimes he is still skittish, but “he has become SO much more patient and loving.” She worked with him to do some conditioning to help him stop feeling so overstimulated. Her family has been mourning the loss of their Corgi named Scooter, who passed away from blood cancer. Bobbi has been a bright light in this dark time for Rachel and her family.

Bobbi made the big move to a cage-free room in Bianca’s Furry Friend’s Feline Adoption Center this past winter, and the change in his personality occurred immediately! From the moment he entered the room, he rushed to the lap of his closest confidant and head-butted his approval. Bobbi shares a room with other feline friends, who are all on a diet for lower urinary tract disease, and they live harmoniously in the glow of the sunny windows while lounging in comfy beds together. When it’s playtime, Bobbi boisterously takes the prize every time. We’re very hopeful that his family is going to discover him soon, and bring home this treasure we’ve all grown to love.

Big changes throughout North Shore Animal League America’s Port Washington, NY campus have meant big changes for Bobbi! You can now find our extraordinarily energetic eight-year-old living in our Feline Behavior Suite where he is afforded longer days of cage-free living than in his previous space. Bobbi is carefully monitored for his FLUTD and he’s had a fantastic health streak of late. There haven’t been any scares about blockages of his lower urinary tract. His special diet—provided at no cost thanks to our Sponsor program—is all this frisky fella needs to keep him in tip top condition. He takes care of exercising by chasing feathered toys around because, after all, the world is Bobbi’s playground!