Meet Clifford! Clifford came to our shelter from Turks and Caicos, as a young stray dog. When he arrived his hip and front paw were severely damaged from being hit by a car. Unfortunately, his leg couldn’t be saved and had to be amputated. His recovery period was long. The staff in our Pet Health Centers rehabilitation ward had to hand feed him and teach Clifford how to walk again. 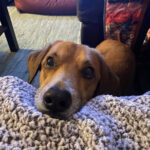 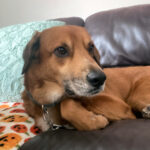 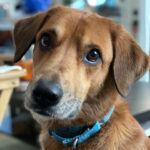 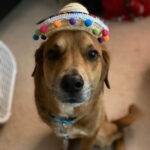 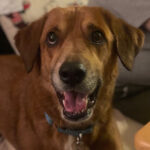 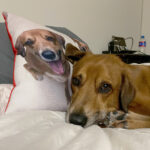 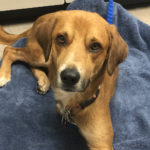 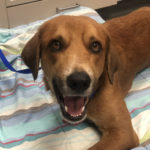 Having been homeless at such a tender age, the shelter setting was very difficult for dear Clifford, so our pet behaviorists worked on his socialization. Then, while still being nurtured in our facilities, Clifford was diagnosed with a spinal disc disease. Throughout it all, this charming big red dog hobbled his way into the hearts of so many people and other dogs. Animal League America’s Pet Sponsorship Program will not abandon Clifford. We will continue to support both his medical and emotional needs even if it’s for the rest of his life.

Thank you for sponsoring Clifford! He needs you to be able to live the full life he deserves.

Your donation today to our Pet Sponsorship Program will ensure that Clifford, and all our Sponsor animals, are taken care of so they can have the happy lives they deserve.

Clifford has been very patient with his family during their recent move into a new apartment. His sweet temperament allows him to adapt well to new situations. “He just loves life,” said mom Angelica. She noted that his back legs have been a little more painful to him than usual. His doting parents are planning on adding more carpeting to their new home which will make it easier on him.

Clifford has adjusted well to beach life since his family moved into their new home. He is loving his walks along the ocean, followed by long snoozes on his bed. Chewing is also a favorite pastime, whether on bones or ice cubes. Says mom, Angelica, “Clifford absolutely loves attention and to cuddle. He’s is the best addition to our little family.”

Clifford is as handsome and photogenic as ever! Though he is having some challenges with his mobility, he is his sweet-natured self and is having a good time with his family. “Clifford is having a little bit of a hard time moving around due to his legs being weak, but he still loves life,” said mom, Angelica. His family moved to a new home on the beach, which Clifford is enjoying, along with his canine sibling Miles. We are happy to hear that Clifford has also been well-supplied with his favorite things, including “treats, comfy beds, and stuffed animal toys.”

Clifford is absolutely thriving, according to his mom, Angelica. He was switched to a special diet dog food in order to help him keep his weight down, and prevent added pressure on his legs. Clifford hasn’t minded, and continues to enjoy his comfy doggy bed, as well as soaking up the sun on the deck when he can. “He is such a great addition to our family,” Angelica said. “Clifford has truly come out of his shell since he has been with us. He is the best.”

Clifford was particularly happy to say good-bye to winter and hello to warmer temperatures. Clifford’s mom, Angelica, tells us that Clifford loves running around in the sunshine during the day, and that they frequently catch him sunbathing. Clifford has come a long way from the streets of Turks & Caicos, where he was rescued. Now he is fully integrated into his new home, and they truly love having him as part of their family. Says Angelica, “Clifford is doing great! He loves to sleep with me at night, and he’s such a wonderful addition to our home.”

Clifford’s life before coming to Animal League America was not easy as he was living on the streets of Turks & Caicos. It was believed that he was hit by a car and this damaged his hip and front paw. One leg had to be amputated. He had a long recovery period in our Pet Health Centers which was difficult for him. But he found his special home with mom Angelica, who works at Animal League America, and her family. There’s been an amazing transformation. He loves his dog siblings and that love is extended now to all family members and even some visitors. Recently, Clifford was feeling under the weather and had some vomiting and diarrhea. Our veterinarians at North Shore Animal League America checked him out and gave him some medication for gastroenteritis and he felt better. So all is good right now in Clifford’s big-red-rescue dog world!

Clifford has been amazing according to his family. He has come such a long way in conquering his fear of strangers. His mom’s and grandma’s friends are able to come into the house and pet him and even play with him. Mom found a system that works well for him: Clifford can come up to the strangers, with their permission, and just place his head on their laps. This signals to them that he wants to be pet and given some love. He’s not the same dog that he was when he first arrived at Animal League America. While mom is at work, the family sends her pictures of themselves cuddling with Clifford on the couch. He quickly became a very important part of the family. Mom says “It’s truly wonderful what some love and consistency can do for a dog from the streets. If you put your time, trust, and love into rescue dogs, they will give it back tenfold.”

Clifford is doing great, so exclaims his mom, Angelica. “He loves being lazy and sleeping in my bed with me all cuddled up.” She thinks Clifford is such an amazing dog and feels that he’s grateful to be in a loving, family home after his rough start out on the streets of Turks and Caicos. He was most likely hit be a car and that caused him to lose a leg and caused disc problems in his back. He enjoys being outside in the backyard with his two dog siblings. Angelica says Clifford shows his “extremely goofy side” with his new family and they absolutely adore him. She worries that he is becoming spoiled as he gets turkey with his dinner and treats throughout the day. “His favorite thing to do is jump on the couch and lay next to my mom and watch television,” she laughed. “They’re best buddies now.” They all love him so much and are so happy about the behavioral progress he has made. Clifford’s folks thanks his sponsors for making it possible for Clifford to be a member of their family.