Louie came to North Shore Animal League America on Dec. 14, 2015 aboard one of our Mobile Rescue Units – one of 87 other dogs and puppies saved from the ravages of a puppy mill. Like many puppy mill survivors, Louie had a number of medical and behavioral issues as a result of being confined to a tiny wire cage without adequate nutrition, medical care, and socialization. 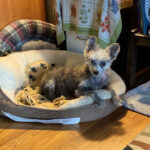 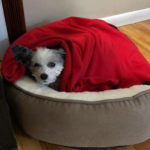 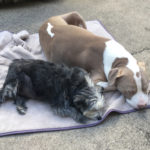 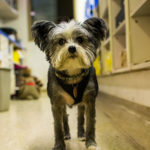 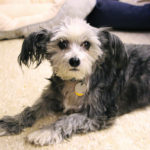 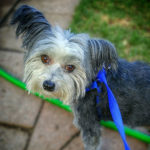 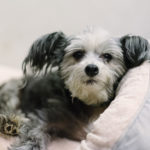 Shortly after his arrival, Louie, then 8-years-old, started having seizures. This was caused by a diagnosed liver condition known as microvascular dysplasia. The toxin buildup from this condition can cause abnormal behavior and weakness. Lifelong medication and diet can keep the toxins at bay. He was also diagnosed with a heart murmur and bilateral luxating patellas (his kneecaps popped in and out of place).
And Louie was also fearful due to previous lack of human attention.

But here, Louie had an amazing team of veterinarians, pet behavior specialists and kennel associates who made it their mission to transform him into a highly adoptable pet. Now, he’s in a loving home and he’ll get the medical attention he needs at North Shore Animal League America for the rest of his life.

Your support of Animal League America’s Sponsor Program will ensure that Louie and the other Sponsor animals receive the love and care they need to be as happy and healthy as possible.

Louie’s family can’t believe how the time has flown with him! Young at heart, Louie is now 14 years old, and has been in his nurturing home for over five years. His mom, Justine, is happy to report that Louie is doing well, but has struggled with a skin infection and they are working on finding the cause. Fortunately, he has not had any seizures. Louie continues to enjoy his naps and his family is grateful every day for having him in their life.

Though Louie may be in his senior days now, he is as adored as ever by his loving family. He still has the sweetest puppy-like face and snuggly disposition! Louie is a shining example of getting another chance to have a joyous life, after his rescue from a puppy mill. From neglect to days spent loved and secure. His family is grateful to all the Sponsors who made it possible.

Louie is living life to the fullest, thanks to all his amazing Sponsors, and his caring family. Originally rescued from a puppy mill, it’s hard to believe that Louie is the same dog who had to learn to trust. Even as he ages, Louie is an affectionate and happy companion who is bonded with all the people in his life. His family expresses how grateful they are that they have Louie to remind them of the joy to be found in every day.

Louie is a testament to the resiliency of dogs. He went from living in a cage in horrific conditions in a puppy mill to being a well-adjusted and beloved pet. Louie conquered his fears and now enjoys interactions with other dogs and even new people. Visits with mom Justine’s grandbaby and grandpuppy are happy times. Louie loves them both — he plays with his canine friend and loves to sit next to the baby. He’s slowing down a bit, but is doing well. His seizures are occasional, one every few months. The medication is really working for him. Louie continues to be a blessing for Justine and he’s been by her side and gotten her through the coronavirus pandemic. She’s so grateful every day that he was rescued and they found each other through Animal League America. She wishes to thank all his Sponsors for their help in keeping him healthy and happy.

Louie recently turned 12 years old! He’s so alert and still playful at times. He sleeps well and although he’s blind in his right eye from a cataract, his hearing is perfect. Louie doesn’t miss a trick. Medically, he has some ups and downs. He still has seizures but they are manageable. He’s such a joy to be with and a sweet, wonderful companion. Mom says “He’s my company since I live alone. I babysit my grandson and it’s amazing that he tolerates a toddler! I think he knows it’s because the baby is important to me. I love Louie so much and thank Animal League America every day for rescuing him.”

Anyone who first met Louie after he came in as part of a big mill dog rescue in 2015, would be amazed seeing him today at home with mom Justine. He had several medical issues, was very frightened, and had a difficult time when Animal League America vets or groomers tried to care for him. While the staff here began the process to help him overcome his fears, it wasn’t until Justine and Louie found each other that he really came into his own. This former puppy mill survivor has come such a long, long way both medically and behaviorally. His seizures, caused by his liver not being able to remove toxins from his blood, have been controlled by medication. Justine said he has “a best friend, a Pittie mix, who is also my grand puppy!” Louie also loves to sit next to Justine’s human grandbaby. Justine and Louie are certainly a perfect match — she’s given him love and a caring home and he has blossomed.

Louie is living a great life with mom, Justine, now, but when he arrived at North Shore Animal League America as part of a rescue of puppy mill dogs, he was terrified and desperately needed medical care. He started having seizures and it was determined that they were the result of a condition known as microvascular dysplasia. His liver couldn’t remove toxins and that caused weakness and seizures. He’s on medication and a special diet to control this. Aside from his medical issues, one of Louie’s biggest obstacles to adoption was his fear of people. After years of living in isolation in a cage, he had no idea of how to behave properly with humans. Our Pet Behavior staff helped calm his fears and socialize him with different people and places. When he went home with Justine, his life changed forever. He now enjoys his walks outside every day and has learned to trust people a lot more. He is playful, even as a senior, and truly a great part of the family!

Louie’s mom, Justine says he’s doing super. His seizures are under control — he only has one about every three months or so. This means that the medication is working well. He’s an active boy and enjoys taking walks every day. Louie has become social with other dogs that he meets on his walks — he used to be afraid of them all. Over the years, he’s gotten better with meeting people he doesn’t know. “He’s a joy and great company for me,” exclaims Justine. “I love him so much.” We know his Sponsors do too!

Louie is a true puppy mill survivor. Louie has been able to trust people and conquer his fear of other dogs. His mom, Justine, says he is even becoming more and more social with other dogs. He’s also in good health. He still has occasional epileptic seizures, but these do not cause him any pain. The veterinarian regularly monitors the level of the anti-seizure medication in his blood to make sure he stays the best he can be. The medication helps reduce the number of seizures and how severe they are. Justine just loves having him as part of her family and knowing that his life has become so much better.

Sponsors will be happy to learn that he’s doing great. Since he was adopted, he has developed a cute and playful personality. His mom, Justine, said that it took him about a year to become trusting and conquer his fear of people and other dogs — a real triumph for an older dog. A breeding mill survivor with medical issues, adorable Louie is Justine’s second rescue from Animal League America. “Although it takes time to establish trust,” she said, “it’s more than worth the effort.” She and Louie thank his Sponsors for making his life happy, despite his rough start.

Louie is doing wonderfully at home. The constant love and affection he receives from his family has really helped him come out of his shell and he’s really blossomed in the two years since being adopted. Louie’s human mom, Justine, said he’s learned how to trust and even playing well with other dogs! He’s in good health, but still has occasional seizures which fortunately don’t cause him much distress. “Every day he’s a joy and gives me so much happiness,” Justine said. “It was the best thing I have done. I can honestly say that life has been so much better since Louie has burst onto the scene! I can’t thank Animal League America enough for allowing our paths to cross.”

Louie’s mom Justine says that Louie has been doing amazingly well since the family moved to their new home in Hoboken, New Jersey. His big
personality has come to light and his energy is spectacular. Sometimes all it takes is a change in scenery and a family who loves and adores a pup to elicit positive changes. Thanks to the support of all of his Sponsor Parents, Louie is now living his best life, treated with respect and admiration – a life we hope every rescue pet gets to experience one day.

Louie’s mom Justine said her loving senior man is still taking the time to adjusting to life in his new home, but he has brought her so much joy in the process. He’s still hesitant with new people and unfamiliar dogs, but he is steadily making process, especially with his human family never too far behind. Rescued from a Midwestern puppy mill in 2015, there’s no question Louie needed a patient, caring adopter to help him through the transition process. Luckily for him, he’s found that and more in his mom Justine! Thanks to the support of his family and his sponsor parents, Louie is not only loved unconditionally, but he receives only the best medical care from the veterinarians here at Animal League America.

While he is still adjusting to life in his new home, Louie has quickly become the apple of his mom Justine’s eye! She said although he gets nervous and takes time to adjust when meeting new dogs, she believes his true personality will come out once he feels fully comfortable in his new surroundings. Louie has been through a lot, so Justine knows it will take time and patience before he completely adjusts. In the meantime, he certainly seems to be enjoying a lush life with his human family. Justine says she can tell that Louie loves to be spoiled, and she takes a lot of pride in knowing that her four legged pal will never have to live his life confined to a cage ever again!