Meet Priscilla! Priscilla, a Chihuahua/Border Terrier mix originally from Tennessee, arrived here as a puppy in 2018. This loveable girl has a condition called microvascular dysplasia, a rare congenital disease that can affect blood flow in the liver. Priscilla is also on a special prescription diet to control epileptic seizures, and will likely remain on seizure medication for life. 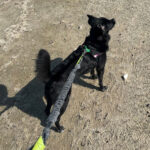 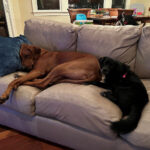 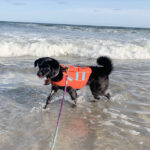 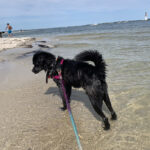 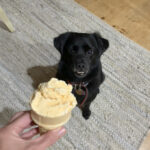 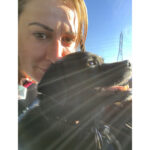 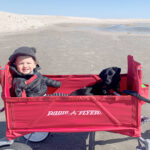 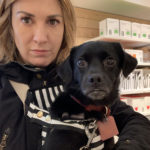 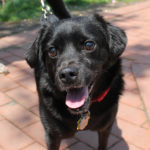 After her evaluation and initial treatment, she entered the home of one of our expert Foster Care parents for the very best preparation to be adopted.

In spite of Priscilla’s special needs, she has proven to be a very sweet, affectionate dog. As a Sponsor Pet, Priscilla’s medical needs are guaranteed to be met. And this is only made possible by supporters of North Shore Animal League America’s Pet Sponsorship Program. Thank you!

Your support of Animal League America’s Pet Sponsorship Program will ensure that Priscilla and the other Sponsor animals receive the love and care they need to be as happy and healthy as possible.

Priscilla (aka Tilly) has been doing well and helping her cheer her parents up after losing her feline sister Pebbles. “Tilly has been loving and affectionate,” said mom Carly. “She cuddles with me every morning and also when we watch TV at night. (She loves 90-Day Fiancée, which she kindly asks that you do not judge her for!) We love our girl to pieces and are always thankful to Animal League America and the Sponsors who helped us get her paw in the door. Merci!”

Priscilla (aka Tilly) is ever the “silly Tilly” she has always been to her mom, Carly. Thankfully, Tilly is doing very well health-wise, and has been on a long seizure-free streak. This goofy girl has been enjoying life by the beach as well, in addition to the critters to be found there. Said Carly, “If you say the word ‘crab’ around her, she goes insane, in a good way! She’s our goofy girl.”

Tilly remains “Silly Priscilly,” according to her mom, Carly. Happy and bouncy as ever, Tilly has been having a few more frequent seizures, however. Tilly’s caregivers are right on top of her condition, and are looking into whether she might need an adjustment to her medication. Otherwise, Tilly is still firm on her preferences, and her mom tells us: “Tilly loves the beach and cheese, hates her cat sister, and tolerates her human brother very well! She also enjoyed dressing up as Springsteen last year.”

“We love our Tilly Tots to pieces and cannot imagine life before her,” said Tilly’s mom, Carly. Tilly is certainly living her best life being adored by her family. In fact, Tilly received even more attention when she joined a local dog show earlier this year dressed as Punky Brewster! Tilly has really come out of her shell, is warming up to other people, and making a lot of progress walking on a leash. “Tilly might have been a long shot given her health complications,” Carly said. “But now she’s happy and healthy and enjoying life to the fullest. Thank you Animal League America and Sponsors for making this possible.”

Tilly is doing well, and according to her mom, Carly, “enjoying life like a royal.” Tilly’s medications have been adjusted to help with recent seizures and anxiety, and she seems to be responding well. Tilly’s parents want to do everything they can to give her the best life possible. Carly says, “Tilly just loves chasing seagulls at the beach.” After Tilly started chewing up her baby brother’s human toys, her parents bought Tilly her very own teething ring for dogs. Though it looks a little strange, they realize “a happy dog’s a happy dog! We love this silly gal to pieces!”

Mom, Carly, says that Tilly is still silly Tilly. She’s only had a few seizures over the past several months. She’s really loving her human brother who’s almost one year old. Her parents love Priscilla so much, her goofball ways have kept them going during the challenge of the pandemic and lockdowns. The family was very sad because her sister, Pebbles the cat, had been diagnosed with a brain tumor. The vet thought that the kitty would only a few weeks to live and it was so difficult for all of them. There is no doubt that Tilly will try to keep them on their happy feet. Her family has been taking Priscilla to the beach in the off season and she still absolutely loves it.

Priscilla, aka Tilly, discovered her inner “beach bunny” while spending late summer on the Jersey Shore. Her family managed to escape New York City for a little while, and it seems that Priscilla wants to pitch her own Jersey Shore reality show. But her mom, Carly, is not sure if an entire series dedicated to barking at ducks and chasing crabs will be a hit. Aside from being Queen of the Jersey Shore, Tilly’s so happy the dog parks are back open in New York so she can run around off leash while in the city. Her seizures have been well controlled and she is feeling fine. Tilly and her human brother are now fast friends. Louis loves her! Whenever Louis is crying, his parents just call Priscilla in and he’s instantly happy — she’s endlessly entertaining to a child. Overall, Priscilla is happier than ever, and Carly is grateful that Animal League America and her Sponsors gave her family the wonderful opportunity to have Priscilla as part of their life!

Priscilla’s (aka Tilly’s) parents are so happy to have her around, especially during these uncertain times, having to maintain social distancing due to the pandemic. While she’s unable to get much off-leash time due to the closed dog parks, Tilly’s mom, Carly, still takes her on walks around the neighborhood twice a day. The most disappointing thing about this for Priscilla has been that she misses going to stores in her carry bag — she’s such a shopper. Her mom and dad have been playing lots of ball with her inside since they lifted the *no running in the house* rule. Tilly has a pretty impressive collection of tennis balls and squeak toys in all areas of their home. And Tilly’s family has increased by one with a human baby brother. She just loves to nap next to him. Happily, there have been no seizures to report and only one scuffle with the cat!

Priscilla or Tilly Tots (as mom Carly calls her), is doing wonderfully well. She did have a seizure a few months back, so the veterinarian added a new medication and she’s been more relaxed. Priscilla’s mom says they have to watch that there is not too much going on at once and try to keep things tame around her. Tilly and her mom love to go places together—the park, the bank, or a clearance sale in a trendy clothing store. It’s hard to imagine such a rough and tumble dog hopping in a purse, but sometimes on their outings she likes being carried in a bag. They attend many events together and had a lot of fun this past year with Halloween: They participated in a dog parade dressed as Dionne and Cher from Clueless. Then they attended a doggie Halloween party and Priscilla dressed as Wednesday Addams from the Addams family. She won for best costume!! They cheered on runners during the New York City Marathon—although Tilly was more interested in the cheese dogs. People stop and comment about how happy Tilly looks. Soon this little family will be expanding when Tilly gets a new (human) baby brother!

Tilly is doing wonderfully and making progress in so many ways. Her walking skills have improved so much. She’s gone from crazy rodeo girl on the leash to a posh lady. This girl is ready to walk the runway. Her mom, Carly, is so happy that there have been no seizures in over a month! Tilly recently took a trip to North Carolina and rode on a plane! She quietly sat under the seat for the short flight and didn’t make a peep. She enjoys the beach, but not so much the water. She’s a good swimmer, and does a fine job swimming right back to shore. It turns out that she loves to chase ghost crabs, but Carly didn’t let her actually catch one. Tilly recently celebrated her birthday and there was a selection of three cheeses for three years. Don’t worry, she only had a little bit shaved in her dog food. This girl also loves all seasons even winter. As long as she can run around, she doesn’t even notice the snow. She does have a Mickey Mouse bomber jacket for colder weather!

Her mom reports that “Tilly” has adapted so well since she arrived in their New York City home. She was a bit shocked by all the motion and color of the city, but now she’s a true city girl. “She’s an infinite source of entertainment because she’s hardcore fun and fearless, yet sloppy and enough of a goofball to assure that no adventure is too serious and everyone’s invited,” says Carly. There have been two seizure episodes in six months, but the doctors at our Pet Health Centers were quick to examine her and they think she is doing fine. Tilly loves to chase tennis balls and will play for hours, but she really adores chasing other dogs in the park. “She will chase small dogs, big dogs, old dogs, and young dogs — she finds the fun in everyone. We’re so happy that we brought this girl into our lives, and I cannot thank her Sponsors enough,” enthused Carly.

Affectionate. Smart. Fearless. Loves to run and play. These are just a few of the ways Priscilla’s foster mom, Marilyn, describes this sweet girl!
Priscilla, who is still looking for a responsible, loving home to call her own, enjoys running around the yard with her canine foster sibling (even in the rain!) and playing with her toys. And she’s recently learned some new commands like “come” and “stay.” With the help of prescribed medications, taken twice a day,- Priscilla’s seizures have been significantly reduced, allowing her much more time to simply enjoy life. Thanks to the support of her Sponsors, “Silly Priscilly,” as she’s affectionately called by Marilyn, continues to thrive.