Meet Strider! Strider was one of a litter of puppies born to Gypsy, a rescue from Texas, right here in the Sponsorship Nursery at North Shore Animal League America. Strider nursed, ate, wrestled, and played with his brothers and sisters. 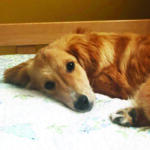 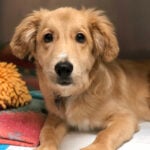 As Strider grew, he started dragging his hind end around. Tests revealed that he has a bone growth disorder called hypertrophic osteodystrophy (HOD). This disease affects the growth plates in the long bones of puppies causing serious inflammation, sometimes severe angular limb deformities, and a lot of pain. All four of Strider’s limbs are affected. Fortunately for Strider, he has entered the Pet Sponsorship Program. The expense of his anti-inflammatory and pain medications, as well as surgeries to correct the growth plates so he can move more comfortably, will be covered. Thank you for sponsoring this sweet-tempered and, very obviously, handsome fella!

Your donation today to our Pet Sponsorship Program will ensure that Strider, and all our Sponsor animals, are taken care of so they can have the happy lives they deserve.

Strider continued with his rehabilitation after the first surgery to repair his right hind leg, but he had been struggling. A wheelchair was ordered just for him with the thought that this would help with his mobility, but Strider refused to move forward in it — although occasionally he did move backward! His foster mom, Neda, reports that he will get up and follow his furry sibling, Gerry, to the door to go out to do his business. But sometimes he cries out when he is walking and just stops. So the plan became to increase the level of physical therapy. It seems to be working as Strider is walking more normally and weakness has improved. He will be getting neutered soon and the veterinarians at the Pet Health Centers will take more x-rays and consult with the specialists to see what his next steps, literally, will be.

Strider has been enjoying life in his foster home. Though unable to get around well, he enjoys rolling around in the yard with his foster brother Gerry and loves his stuffed toys. Gerry understands that Strider is unable to walk much so he often gets on the ground to play with him. They have a very sweet friendship. Strider underwent his first surgery on his left hind limb to correct the deformity of his tibia that was bowing. Unfortunately, after a few weeks, he began dragging his hind end on the ground again. The surgeons discovered that a boney callus had formed at the surgery site that resulted in poor alignment so Strider had surgery again to fix it. His foster mom is now reporting great breakthroughs. He’s begun taking small strides for a short period before resting on the ground. Strider will need surgeries on his three other legs as well.