Tobias came to North Shore Animal League America as a kitten when his owners could no longer afford to keep him. Here, at our Pet Health Centers, the friendly Persian was found to have repetitive urinary blockages and underwent several surgeries to ease the problem. 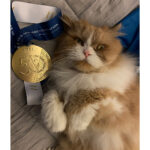 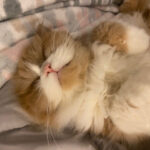 Thanks to subsequent emergency surgery, Tobias’ ailments lessened over time. He may still be prone to blockages and infections in the future and must be regularly monitored. Because of you he has a fresh chance to live the life he was always meant to have. Thank you!

Your support of Animal League America’s Pet Sponsorship Program will ensure that Tobias and all the Sponsor animals receive the love and care they need to be as happy and healthy as possible.

Tobias is keeping himself busy by keeping a watchful eye on the neighborhood from his favorite window perch. From that spot, he can also wait for his family members to return, since he is always happiest when everyone is home with him.

Tobias might have the exterior of a high maintenance cat, but he won’t hesitate to wrestle and play with toys and other family members. They are so enchanted by him, they don’t mind staying on top of the brushing he requires. Tobias would prefer it if his family stayed home all the time, but will entertain himself by watching animals outside the window, while he waits for them to get home.

Tobias is adjusting to his mom, Chre, being back at work full-time but continues to charm and play. “His favorite activity is rough-housing with his older brother Rico,” Chre said. “But he also enjoys laying in the window watching the deer behind our house.” They have to stay on top of his grooming, because with his long hair, it can become matted. That also means he gets to sport fun pet sweaters to stay warm! With long hair or short, Tobias “is a happy cat and we love him so much!”

Whenever Tobias needs help with feline lower urinary tract disease, his family and our Pet Health Centers are there for him to provide care. Tobias is a cat who certainly loves the outdoors! His mom, Chre, enjoys taking Tobias out for long walks in his stroller, and says he will even walk with her on a leash. He has charmed his family completely, and they tell us they continue to be enamored of their “sweetest boy.”

Tobias is doing well after struggling for a few months due to his feline lower urinary tract disease. According to mom, Chre, “Thankfully, at the Pet Health Centers they came up with a plan and medication to get him back on track. And now that the weather is warmer, Tobias can go on walks again with us in his pet stroller.” Chre says that Tobias also enjoys sitting outside with them on his cat leash. They think sometimes Tobias might be a dog stuck in a cat’s body! Says Chre, “Tobias is just the happiest, sweetest boy.”

Tobias is enjoying life with Chre in their new home. He’s still very active and is fond of pouncing on people unexpectedly when they walk into a room. But it’s all in fun! He loves wand toys and will chase and grab the colorful fleece when it’s dangled for him. Tobias also spends hours sitting near the large windows looking out at the woods in the backyard and watching birds and other wildlife. Having running water in a fountain encourages him to drink plenty of water. The veterinarians say it is especially important for Tobias because of his feline lower urinary tract disease. Chre has to keep a close eye on him because recently he again had trouble urinating. They visited the Pet Health Centers and he was given medication and the problem was soon resolved. As a Sponsor Pet, his medical needs are covered by Animal League America so he can live as long and healthfully as possible.

Tobias has been fine, except several months ago he started urinating inappropriately in the house. Mom, Chre, brought him immediately into our Pet Health Centers for a check on Tobias’s condition. Tests showed that his bladder looked okay and there were no stones, crystals, or masses seen. That was a relief! So the veterinarian prescribed some medicine and a cranberry extract. Unfortunately, he ended back at the veterinarian four weeks later because it was happening again. They questioned Chre as to whether it could be behavioral, but she said there was no fighting between cats or anything new to cause stress. So they sent him home with a different medication and everyone is hoping that will solve the problem—poor Chre has had a lot of extra cleaning up to do!

Tobias and his mom, Chre, have been very sad since Pretty Kitty crossed the Rainbow Bridge. But Chre is glad she has Tobias to love and care for. Recently, she had to bring him in to the Pet Health Centers because he was struggling to urinate and missing the litter box. He is on a special diet for his feline lower urinary tract disease. Luckily, he was still eating and drinking with no problem. The veterinarian took a urine sample for testing and a culture — she also prescribed antibiotics. In a follow-up phone call, the veterinarian said she didn’t see any crystals or an infection
and that was great news. “Tobias is now doing very well and doesn’t seem uncomfortable anymore,” said Chre. She is grateful to Animal League America’s medical team for their expertise in helping her care for Tobias!

Tobias has a new home and one of his new cat siblings is none other than Sponsor Pet Pretty Kitty! Unfortunately, Tobias’s first mom got sick and the doctor told her she could no longer have a cat because of her medical condition. He is still settling in with new mom, Chre, who has a soft heart for kitties with medical conditions. She also has a lot of experience making sure they’re comfortable and content.

Tobias has settled into his home nicely. “He is definitely the boss of the house,” says his mom, Laura. “When we get home and don’t open the front door fast enough for him to greet us, he starts meowing and the longer it takes the louder he gets!” His health has been good. Tobias previously had surgery to help with his feline lower urinary tract disease. However, Laura strongly believes that his happiness while living with them has been a big factor in his continuing good health. He also has access to running water in his fountain and drinks plenty each day. The veterinarians told them that water was extra important for him because of his medical condition. Tobias has decided that the absolutely best spot for a snooze is the lap of his dad, Greg. He recently came up with a silly game where he hides around the corner in the kitchen and jumps into the air with both paws up when anyone enters. His favorite toy is still the cardboard cat dancer, but he’s now playing with a colorful fleece on a wand that he likes to chase. Tobias’s parents are grateful to his Sponsors for every day they have together with him.

Within hours of arriving home, this beautiful Persian was purring and rolling on his back for belly rubs — while rolling on top of his freshly signed adoption papers. Since then, he’s claimed many cozy spots around his new Manhattan apartment, which is fine by his parents, Carly and Greg. His dad likes to give him “rides,” which consist of picking him up and walking around the apartment to show him another perspective on things. Carly said his favorite toys are the strings on her hoodie. As for his health, Carly said you’d never guess Tobias had feline lower urinary tract disease. “He is one of the happiest cats we’ve ever met,” she said. “We’re grateful he’s come into our life and we love him very much. We have many years ahead of us, and we are looking forward to every day with him!”