While continuing to recuperate from his hip surgery, Archer spent several weeks with one of our Foster families. There he was able to socialize and get some much needed TLC, while also getting physical therapy for his hip. It wasn’t long before this tenacious Tabby was back on all four paws and ready to find a permanent home of his own. 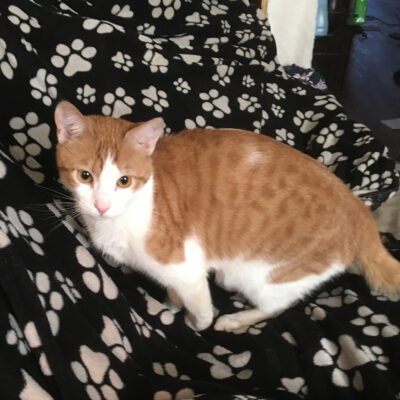 After many applications were reviewed, our Foster Team finally found Archer the purr-fect home. According to his new mom, Judith, Archer is thriving and is very loved by all. Archer is thankful to all the supporters of our Help Me Heal Program who made his new beginning possible.

Luckily for Archer, when the veterinarians checked his bandaged limbs they decided that there were aligned enough to put on splints. He had the splints on his forelimbs for eight weeks and then they were removed and bandages put on. What an ordeal for a young cat to have to go through!

After that time, it was decided that his front legs looked like they were healing well and no surgery would be needed so the bandages were also removed. This sweet cat must have felt so relieved.

While that was great news, Archer still had to get past a major surgery—this one on his right hip. The femoral head ostectomy (FHO) would remove the part of the bone that was fractured. Then the muscle grows and causes some scarring forming an artificial hip joint.

Archer had his hip surgery in early November. “The FHO surgery went well. Once healed, the hip should be pain free,” said Dr. Verdino, who performed the operation. “This is important to our ability to perform rehabilitation on the hip. Archer will also still need physical therapy to build strength back and improve mobility in his front legs too.”

Next Archer will go to a foster care home where he will be encouraged to move around and use his legs and hip. And, of course, when he is ready, Animal League America will make sure to find a family who loves him and will keep him safe.

The handsome, orange-and-white Tabby just lay on the pavement as the people approached. He couldn’t stand and didn’t even try — he’d given up. This precious boy was in a lot of pain, but he didn’t lash out, he just looked up at them as if asking for help.

The staff from the Animal Care Center (ACC) in Manhattan carefully picked him up and took him back to the shelter immediately. It turned out that Archer needed complicated orthopedic surgery that ACC could not provide. So they contacted North Shore Animal League America, and it wasn’t long before Archer was on his way to our Port Washington, N.Y. campus.

When he arrived, he was delivered directly to the Emergency Care Unit in the Alex Lewyt Medical Center where Dr. Mark Verdino, our Senior Vice President and Chief of Veterinary Staff was ready to examine him.

“With these high rise cats, you have to worry about palate fractures or jaw fractures,” said Dr. Verdino. “The deal with this little guy is that he reportedly had a fall from a high-rise building. He broke the radius and ulnas in both forelimbs at the same time.”

Your donation today will help sick and injured animals get the care they need to live healthy, pain-free lives in loving homes of their own.

The doctor believes he also landed on his right hip, which caused the top of the thigh bone, the femoral neck, to fracture. The break in that bone will have to wait as it’s important for the front leg breaks to be taken care of first. Dr. Verdino also checked Archer’s skull and his lungs to make sure they were okay. Often with this type of fall, cats can also have injuries like fractured skulls or collapsed lungs. Fortunately, he found nothing more severe than two damaged teeth and “road rash” under his chin from when he hit the pavement. 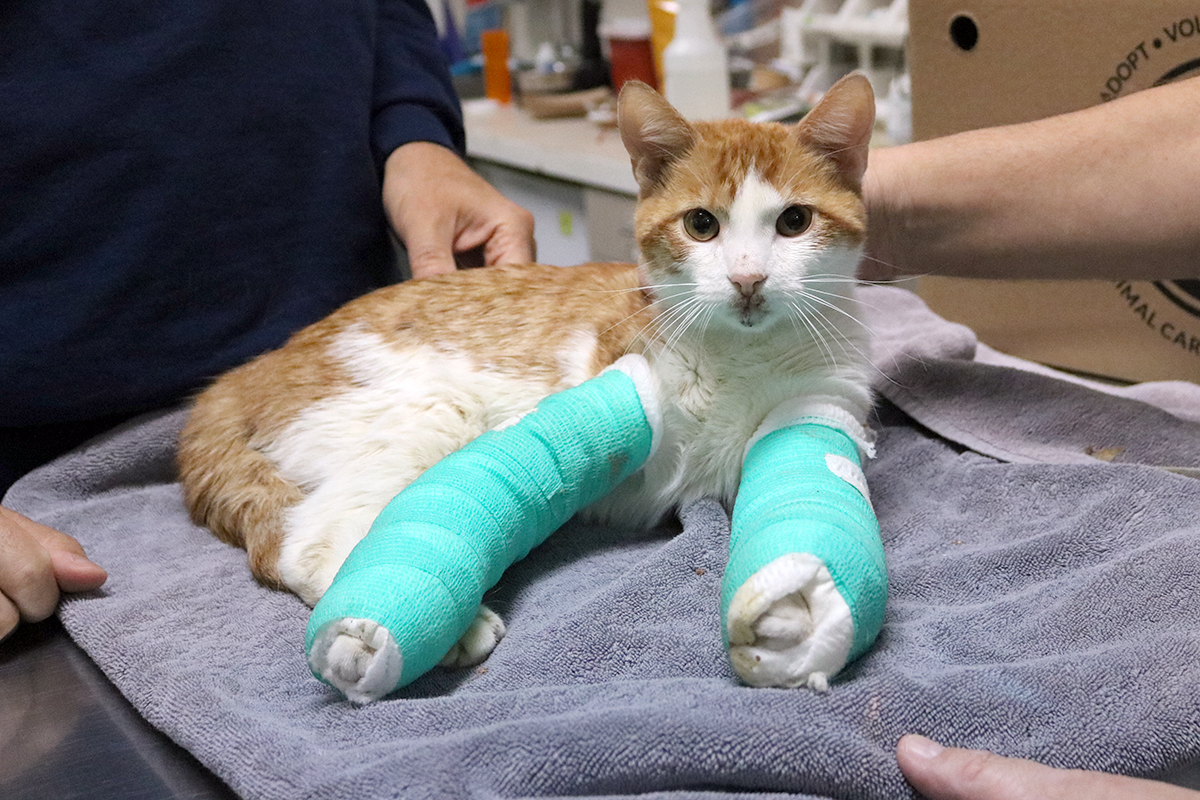 “The plan is to sedate Archer soon, take the bandages off, and x-ray his limbs again to decide if they are aligned enough to splint them. If they are displaced, we will probably have to put in pins or plates to get the bones together,” he stated.

Right now, Archer has some major medical issues that need to be addressed. This sweet, young cat has a long way to go until he’s recovered and able to walk again. Our medical staff will care for him and be there every step of the way, but we can’t do it alone. Your donation today to our Help Me Heal Program means that together we can change the lives of sick and injured animals, and give them healthier and happier futures.