The good news is that Bucky’s finally feeling a lot better after all he’d been through due to living as a stray in South Carolina — he suffered from lack of food, a painful skin infection, and viral skin growths.

The great news is that now he’s found his perfect family! “He’s the best. He’s great with everyone. After three or four days in our home, we were giving him belly rubs,” said Patrick, Bucky’s new dad. 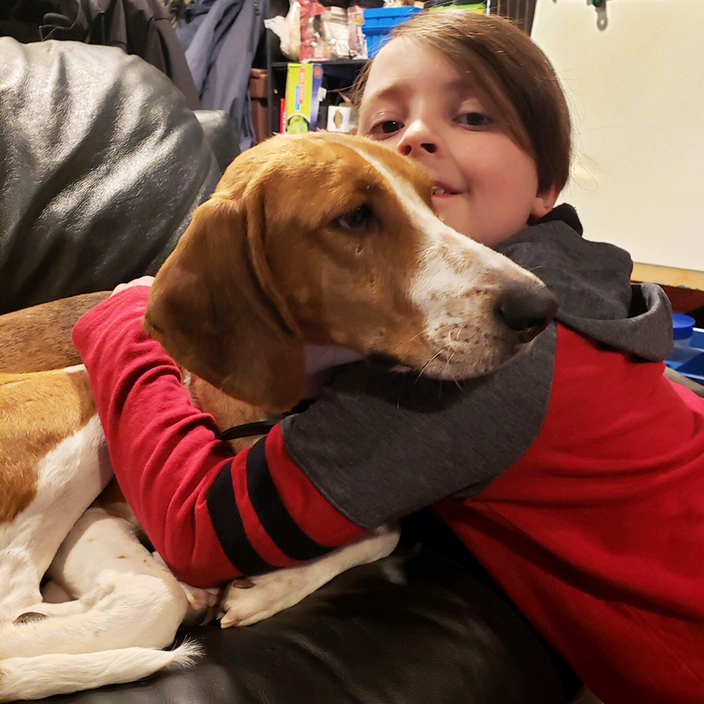 The entire family came together to North Shore Animal League America’s Adoption Center to find a dog. It was most important to Patrick and Katie that the dog the family selected was good with their eight-year-old and three-year-old sons. Bucky and the two boys, especially the three-year-old, were very comfortable with each other right away. It was amazing to see!

“He’s very gentle with my youngest son. He steps carefully over and around him,” commented Patrick. “And if my son is crying, he runs up to see what’s wrong and then sits right next to him.” Every day, Bucky and the boys play and run around in the huge fenced-in yard. He loves to chase tennis balls, but he doesn’t always bring them back yet! He’s even gone to the beach already with dad. 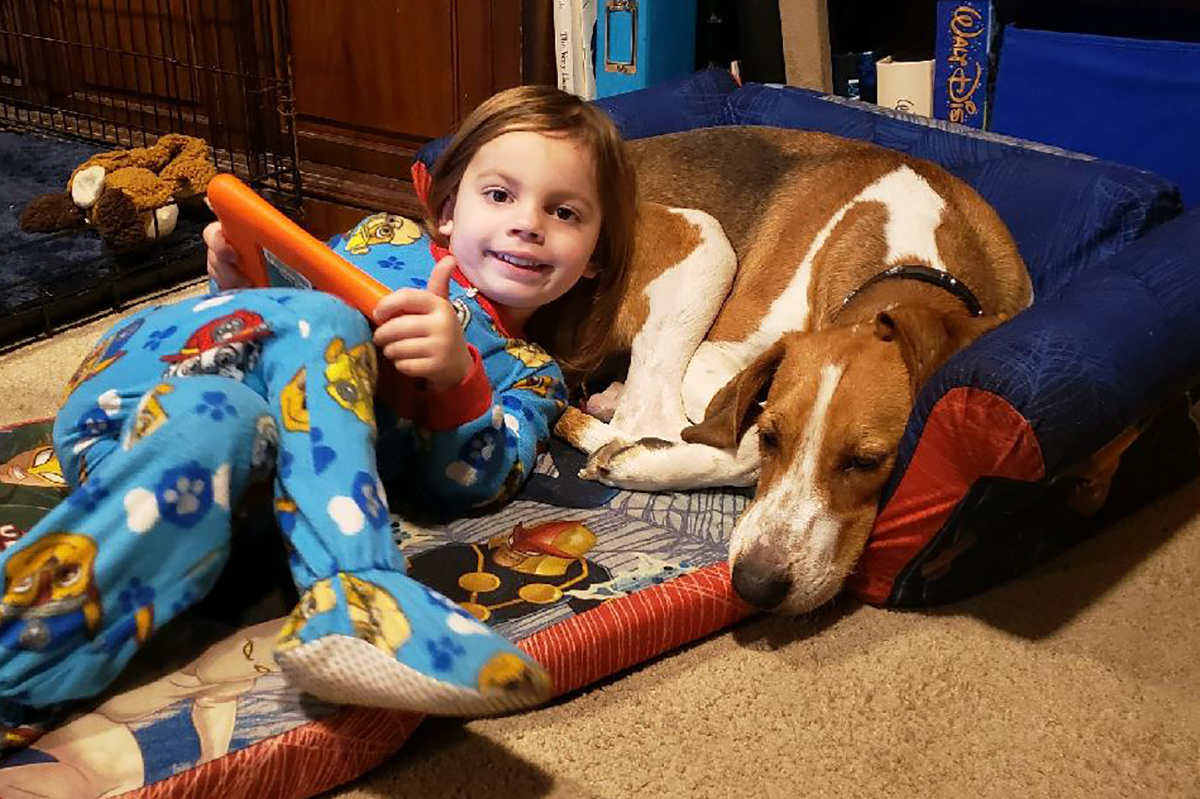 Bucky, a true Hound, enjoys treats and Patrick has been using both soft and hard ones to train him. He’s already learning some commands like “sit” and “down.” The family bought him an orthopedic bed because they felt bad that he had been “through so much.” However, dad admits that most of the time Bucky ends up sleeping in his big bed.

“Bucky makes us all so happy and we are very lucky. He’s become a Daddy’s boy,” he laughs. “He’s my best friend and he’s rescued me too. He’s a great addition to our family and we can’t thank Animal League America enough!” 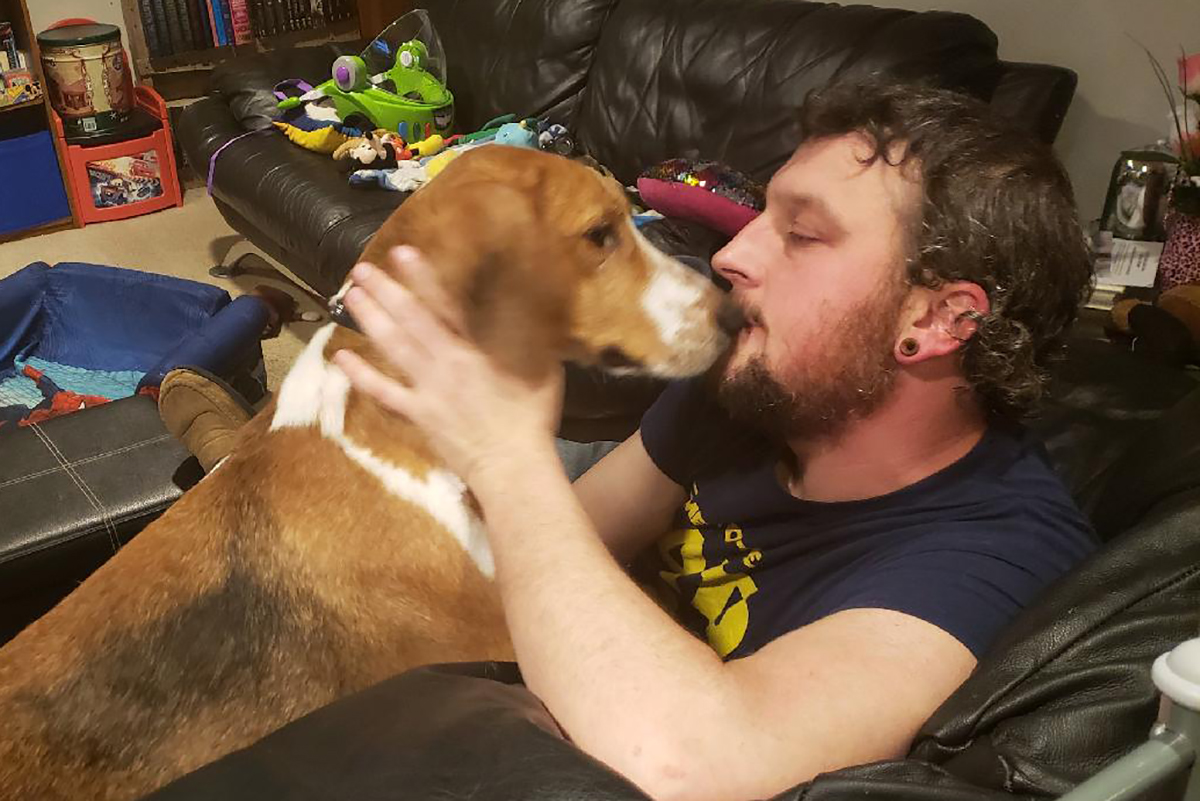 It’s amazing what a little time and tender loving care can do to help a body heal. Since Bucky first arrived his skin has improved a great deal. As the fur started to grow back, it has turned a deeper chestnut color. Test results showed that his pancreas is functioning normally. He’s also gained a few pounds and doesn’t look so painfully thin. 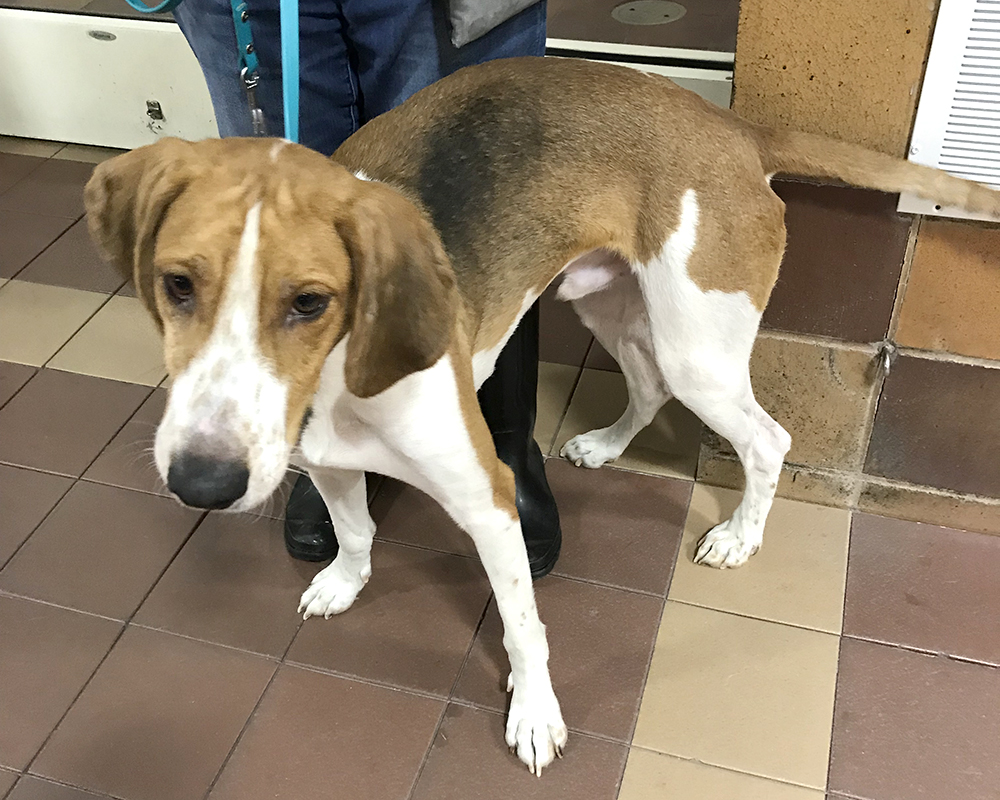 While he was under anesthesia and being neutered, the masses by his eye and under his ear flap were removed. “The masses were biopsied and found to be consistent with viral papillomas or benign skin growths,” said Dr. Gerard Laheney, Senior Veterinarian at Animal League America. “This in itself isn’t really all that bad of a condition but, due to their viral cause, the papillomas come and go unpredictably with no good proven treatments available.” 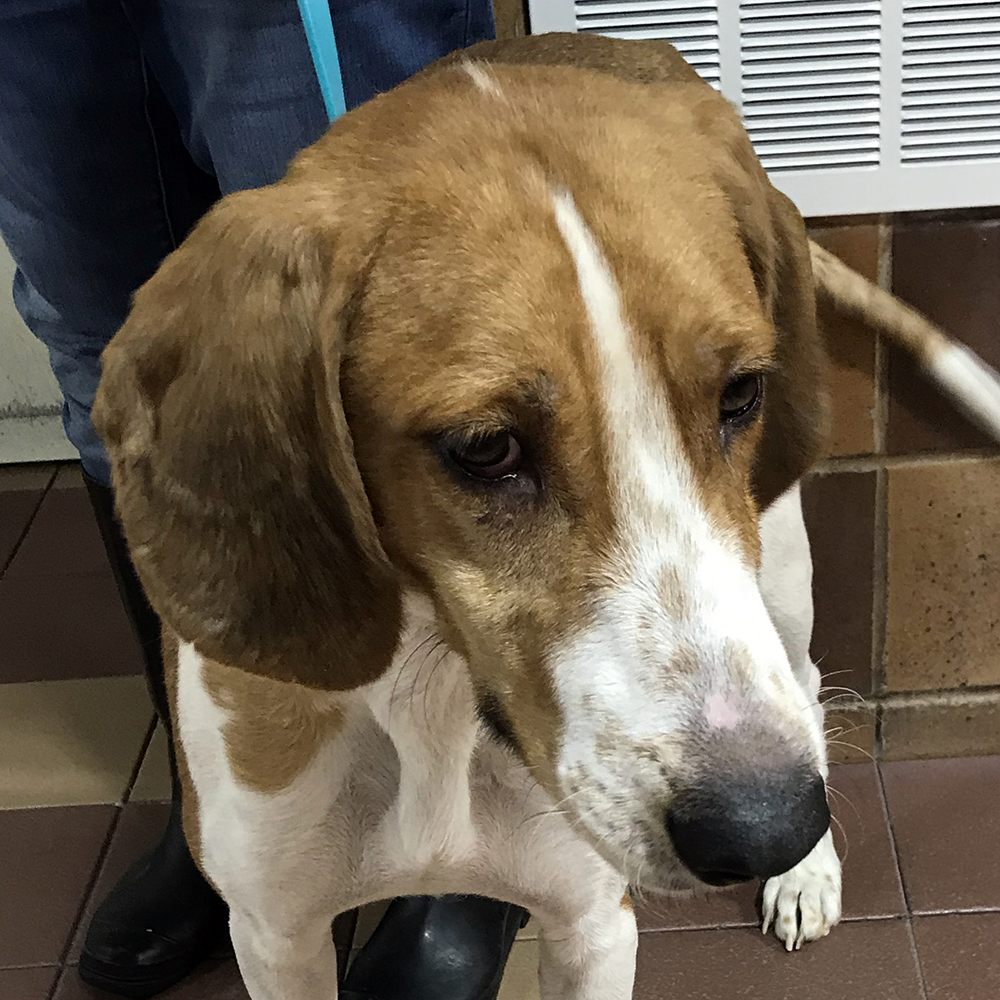 Dr. Laheney expects the papillomas to continue to appear for a few months but, since Bucky has been treated successfully for his skin problems and low weight, the new papilloma growth should begin to slow down. Bucky did suffer a bit of a setback when one tumor developed on the bottom of one of his paw pads causing a painful ulcer to occur. Luckily, it was cleaned up quickly and after a few days the pad has healed nicely.

Today, Bucky has been cleared for adoption. Bucky would love an active home, handles well on leash walks, and gets along well with children. If you’d like to make this handsome young man a part of your family, visit our Port Washington, NY Adoption Center.

Bucky’s ribs show and his hip bones jut out. He’s malnourished and emaciated. At just two-years-old, he looks old beyond his years. Yet for a dog suffering from such neglect, he somehow finds the strength to wag his tail. 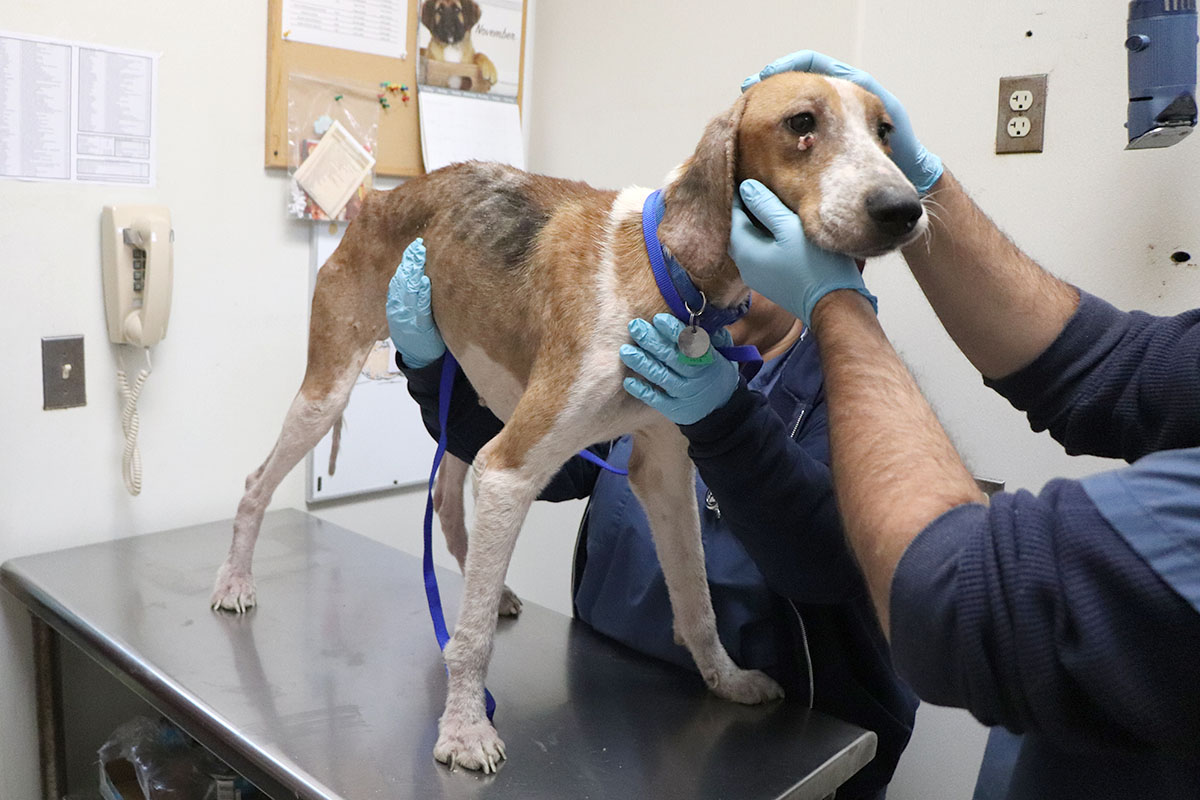 Bucky, a Hound mix, was found as a stray by one of our shelter partners in South Carolina. Knowing he would require more long-term care, they reached out to our Rescue Team for help. A plan went into action to bring this sweet boy back to our Pet Health Centers in Port Washington, NY, where our dedicated staff would be able to provide the specialized care Bucky desperately needed.

As Dr. Gerard Laheney, Senior Veterinarian at Animal League America, begins his examination, he can tell that Bucky has a severe parasite infestation that has caused hair loss and a painful skin infection, possibly mange or scabies. To ease his pain and discomfort, Bucky would be started immediately on antibiotics and a series of special baths. Even with this intensive treatment, it’s likely Bucky’s fur won’t come back fully for 3 – 4 months. These types of infestations are often seen in stray and neglected dogs. Without proper nutrition their immune systems can become weakened.

In addition, there are random growths on Bucky’s body, most notably under his eye and under the flap of one ear. Dr. Laheney believes that they could be from a canine virus or they could be skin tumors. These will be further investigated once Bucky is in better physical condition and ready to be neutered. Once under anesthesia, the surgeon can remove the growths to be biopsied. 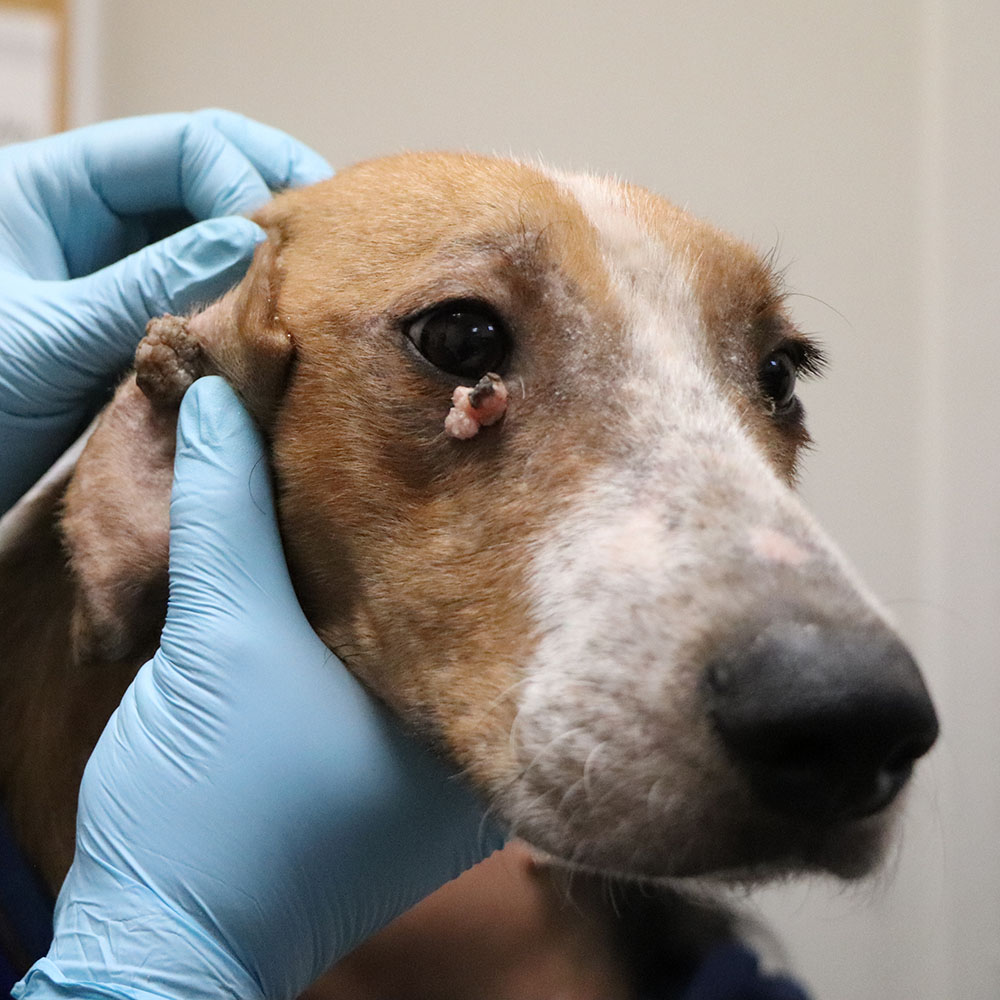 Donate today to give neglected and abandoned animals the urgent medical attention they desperately need.

Poor Bucky was also previously diagnosed with anemia. “We have things on the surface that seem readily apparent and fixable and things below the surface that we want to make sure don’t exist,” said Dr. Laheney. “When we see a dog that is emaciated, veterinarians tend to jump to poor nutrition or lack of food. There can be other causes so I’ve added a test to check the functioning of his pancreas.” If his pancreas isn’t working correctly, the dog may not be able to digest food properly and absorb the required nutrients.

“Also when a dog becomes emaciated, you have to be concerned about refeeding syndrome,” explained Dr. Laheney. “Your instinct is to want to feed him a lot and right away. But you have to feed with a number of small meals instead or he can vomit and get stomach upset.”

Bucky has a long road ahead, but he can’t do it alone. Your donation today to our Help Me Heal Program will provide Bucky, and other neglected or abandoned animals, with the specialized care he needs to overcome his pain and suffering.

Will you be there for Bucky, and let him know that he is no longer alone? 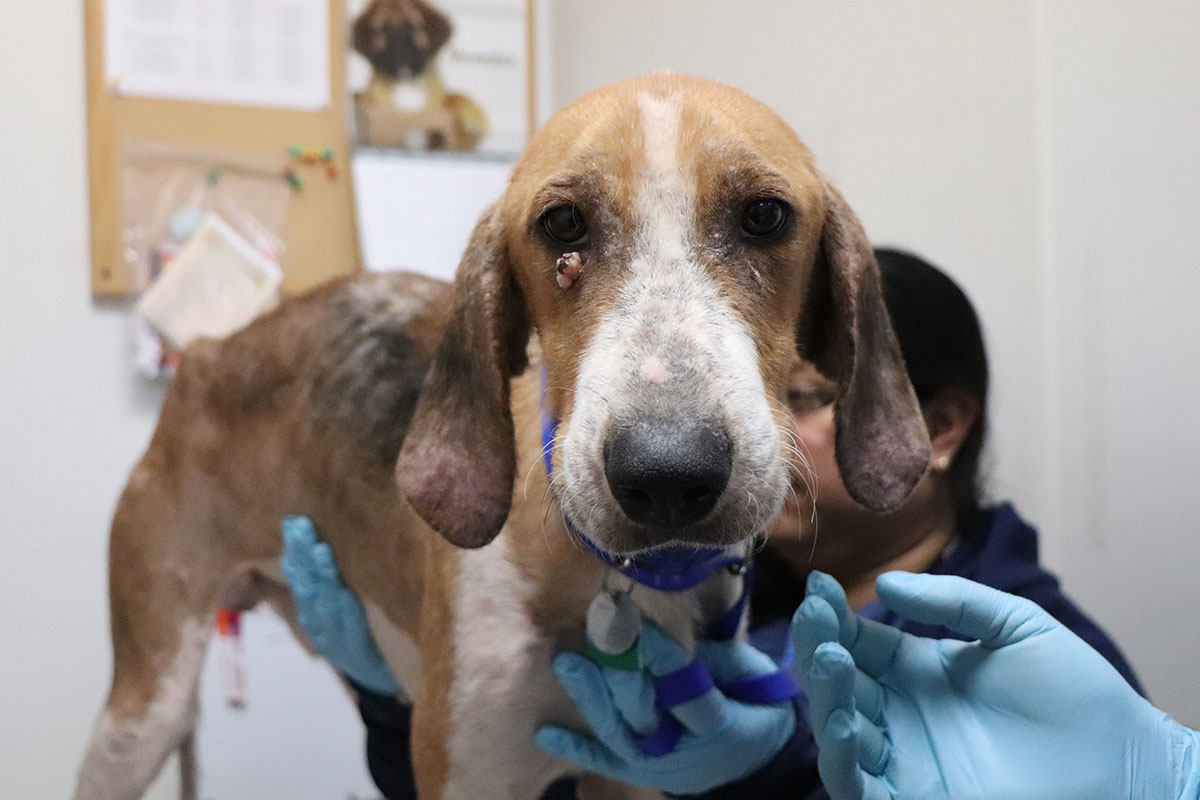