Mr. Gray has come a long way since he first arrived at our Port Washington, NY campus. After the surgeries to remove his eye and fix his fractured jaw, Mr. Gray spent some time in the trusted care of our Pet Health Centers.  It wasn’t long before his jaw was aligned and his feeding tube was removed. Once eating on his own, he gained over half-a-pound almost immediately! 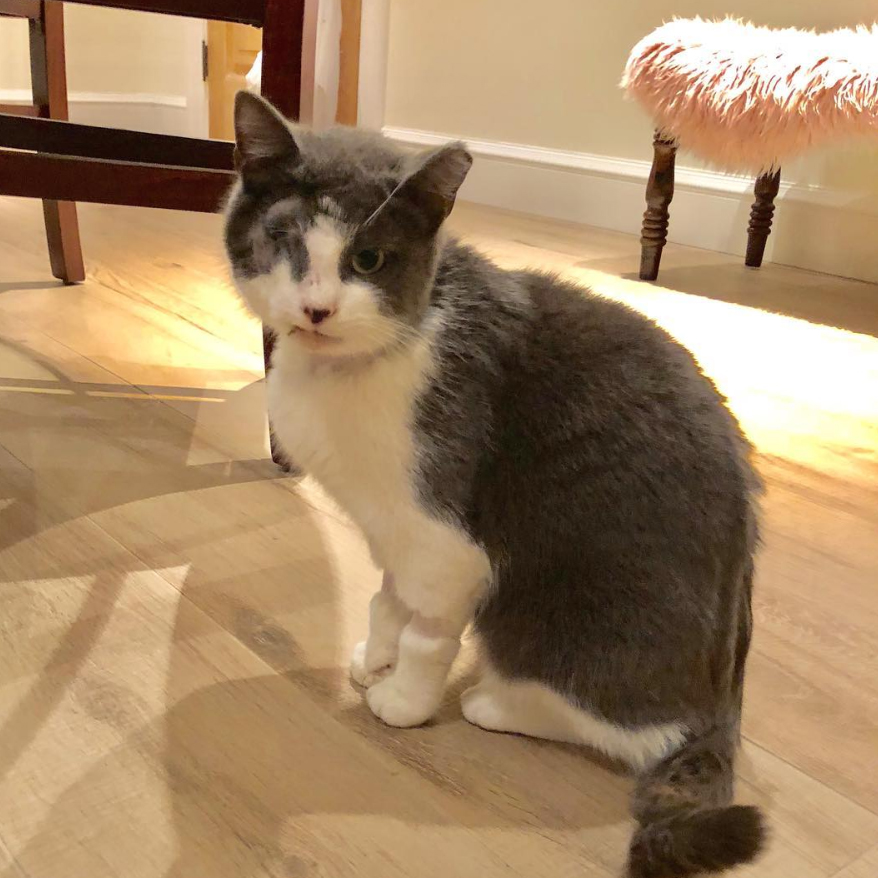 Mr. Gray’s journey of recovery continued with a stay in the home of Volunteer, Foster Parent, and National Spokesperson Beth Stern.  Just the place for some tender loving care!  No one realized, though, that someone else besides his new foster mom was waiting for Mr. Gray. From Day One when the cat arrived in her home, Moonrock — another one-eyed foster cat — decided that Mr. Gray needed his unconditional love and support.  He groomed him several times a day.  They slept, ate, and played together.  Mr. Gray lapped up the attention and the two became inseparable and were stars of Beth’s Instagram page. 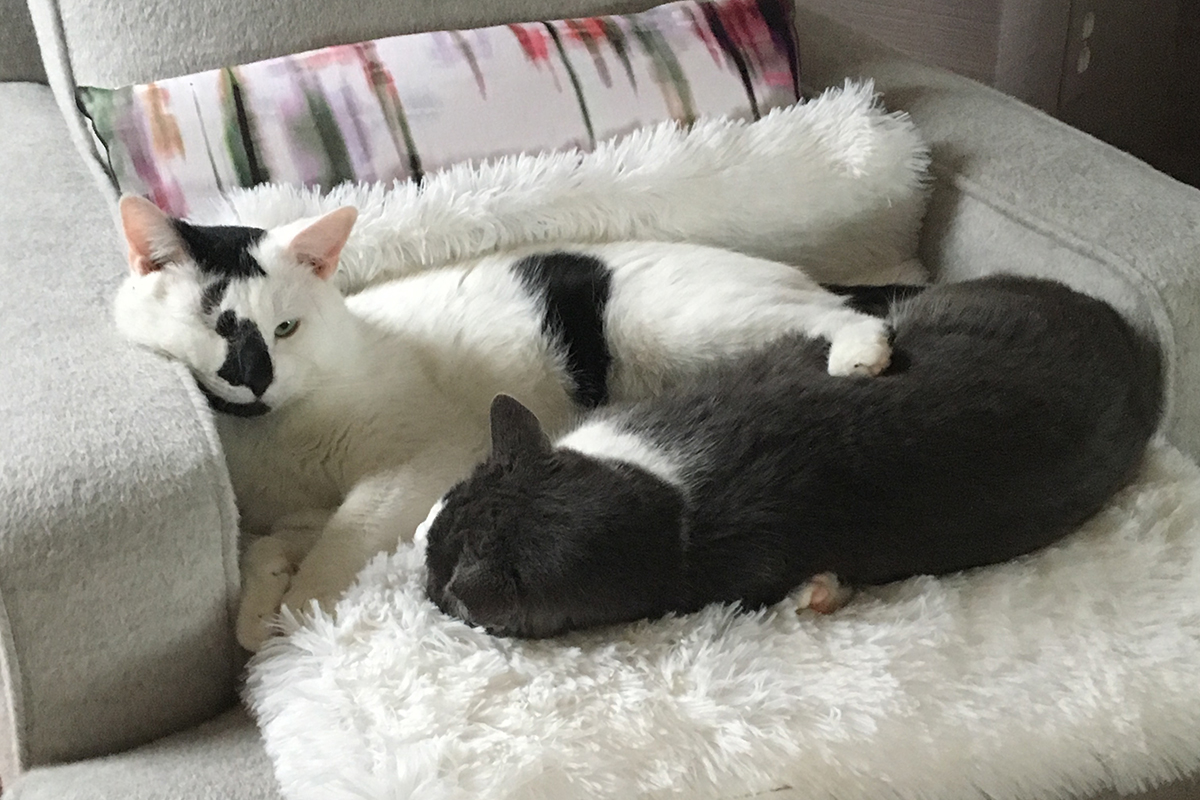 Then Jane came along and offered to adopt them together so they could be friends forever.  What a happy ending for this young boy who suffered so much on the streets of New York City!  Jane herself is thrilled with their adoption. “They are settling in very well. Both have great appetites,” she says. “They’re such good boys!” 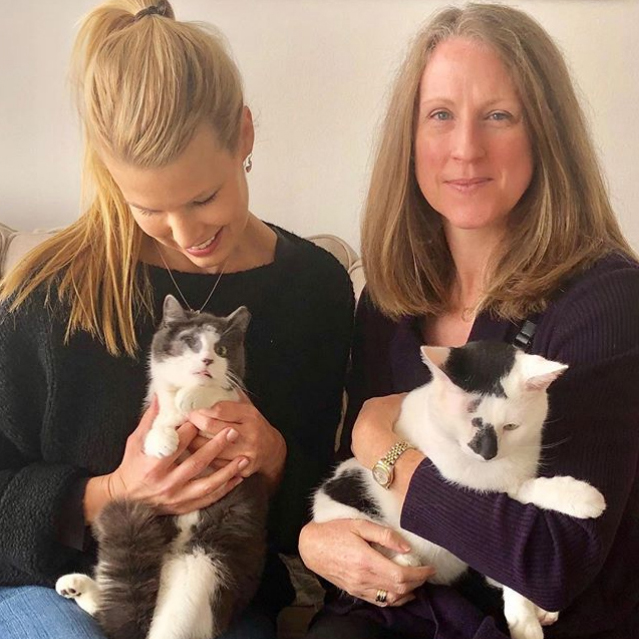 Moonrock is already acclimated to his new surroundings. He’s sleeping on Jane’s bed and enjoys playing with her. Mr. Gray has been shyer and likes to spend some time on his own. “He’ll also interact with me, enjoying gentle belly rubs and pats, and he’ll play with several different toys,” says Jane. “He is a remarkably gentle cat, especially considering what he’s been through.”

Moonrock still loves to groom Mr. Gray at least a couple of times a day. They wrestle together and snuggle up for a nap. “They really have been a gift to me—sweet, funny, and amazingly tolerant of being plopped into a new home,” comments Jane.  “I’m completely delighted!” 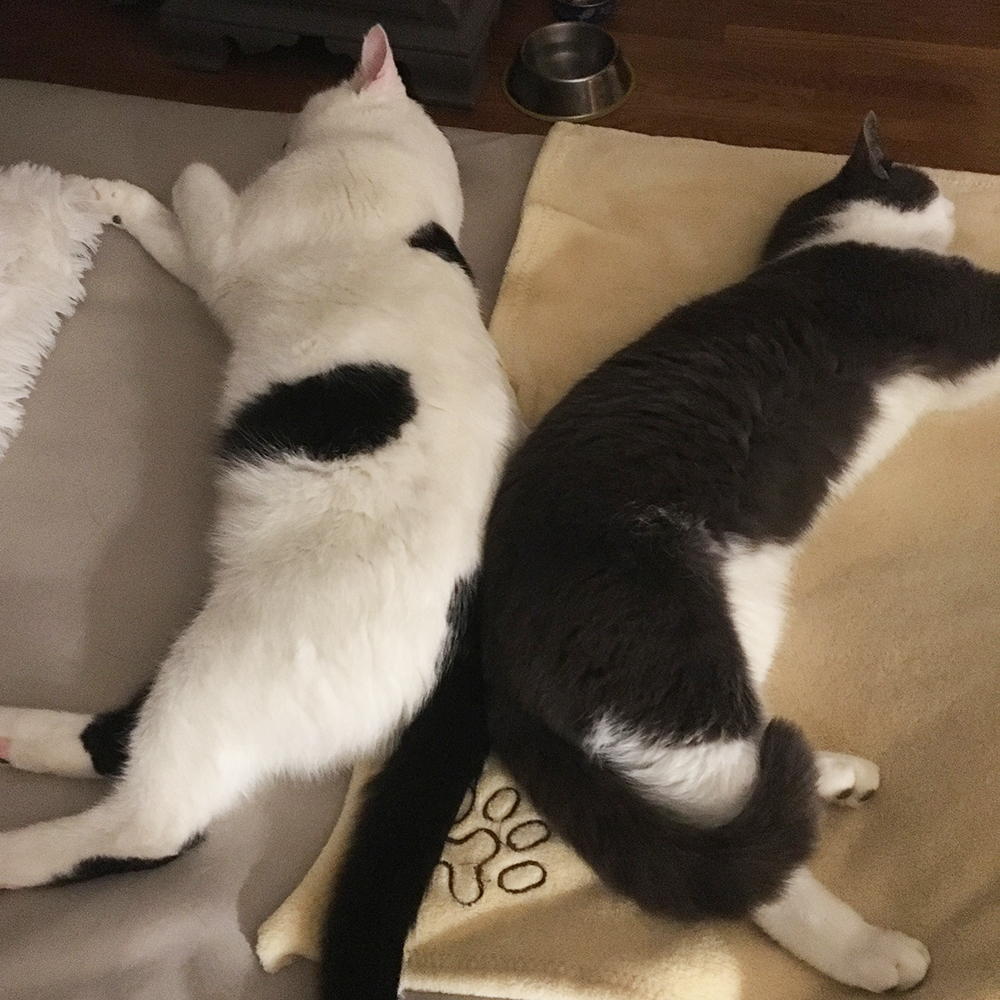 Rescued From The Cold City Streets, Mr. Gray Looks to You For Help

Warning: Some images may be graphic. 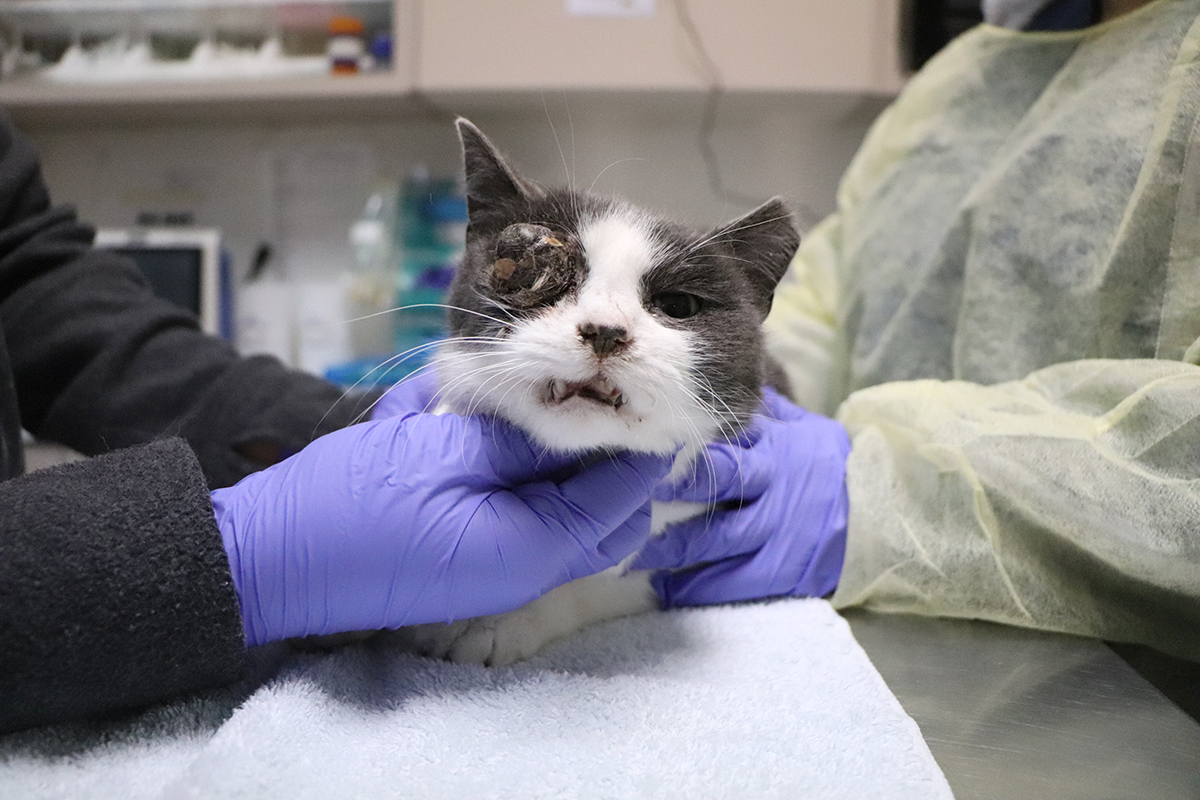 Animal League America received an urgent appeal from Animal Care Centers of Brooklyn (ACC), after Mr. Gray was rescued from the streets. His eyeball was popped forward out of its socket, most likely due to a sudden trauma, and has been like that for a while.  His jaw also was moved out of place and suffered a fracture.  Mr. Gray needed special surgery that the ACC staff knew we could provide at our accredited Pet Health Centers.  We do not turn away suffering animals like Mr. Gray.  We are here to nurture them as part of our no-kill mission—thanks to animal advocates like you.

As soon as he arrived, Mr. Gray was carefully examined by Dr. Marina Tejada, Supervising Veterinarian for Medical Services. “Mr. Gray is a sweet, young cat, who was found as a stray, with obvious trauma to his face.  His eye is beyond surgery and will need to be removed.  His hard palate is intact and his long bones are okay so he is walking fine,” she said.  “The surgeon will wire his broken jaw and the wire will remain in place for six to eight weeks to make sure the bone sets properly.  He will also need to put in a feeding tube so we can easily give Mr. Gray the proper nutrition that he needs to heal.” 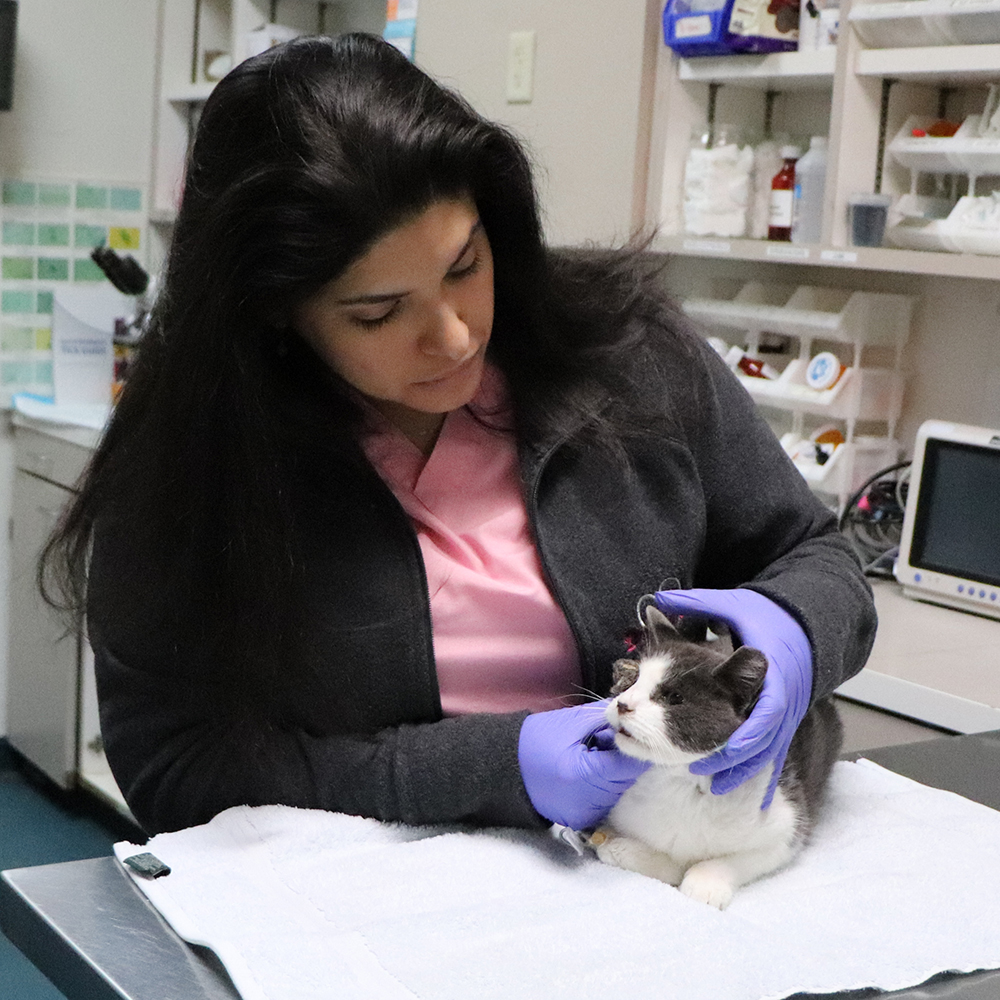 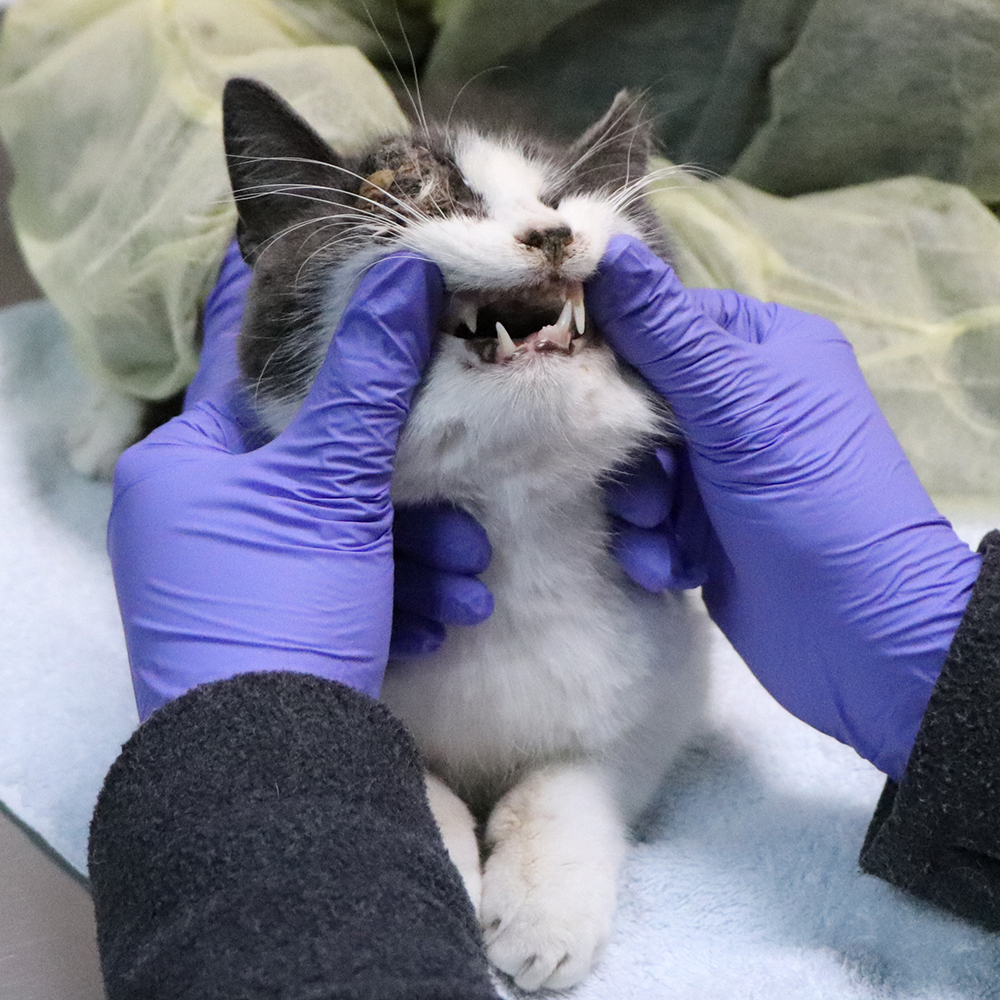 Your donation today can help Mr. Gray, and countless other sick and abandoned animals, get the lifesaving care they need to become the healthy, happy companion animals they were always meant to be.

Dr. Tejada believes Mr. Gray suffered a trauma to the entire right side of his head and face.  While it is impossible to know exactly what happened, she doesn’t think the injuries were from a fall from a high rise or a hit from a speeding car.  More likely, he was possibly hit by a car at a slower speed or subject to some kind of abuse.

As a member of our Help Me Heal Program, Mr. Gray will receive excellent medical care and the opportunity to recover from his surgeries in the home of one of our compassionate foster families. Without the generous support of our donors, he and other sick and injured animals just like him, wouldn’t have the chance to live out their lives with loving adopters who cherish them. Please support this vital program and help give Mr. Gray, and other precious animals, a chance to live a happy, healthy life. 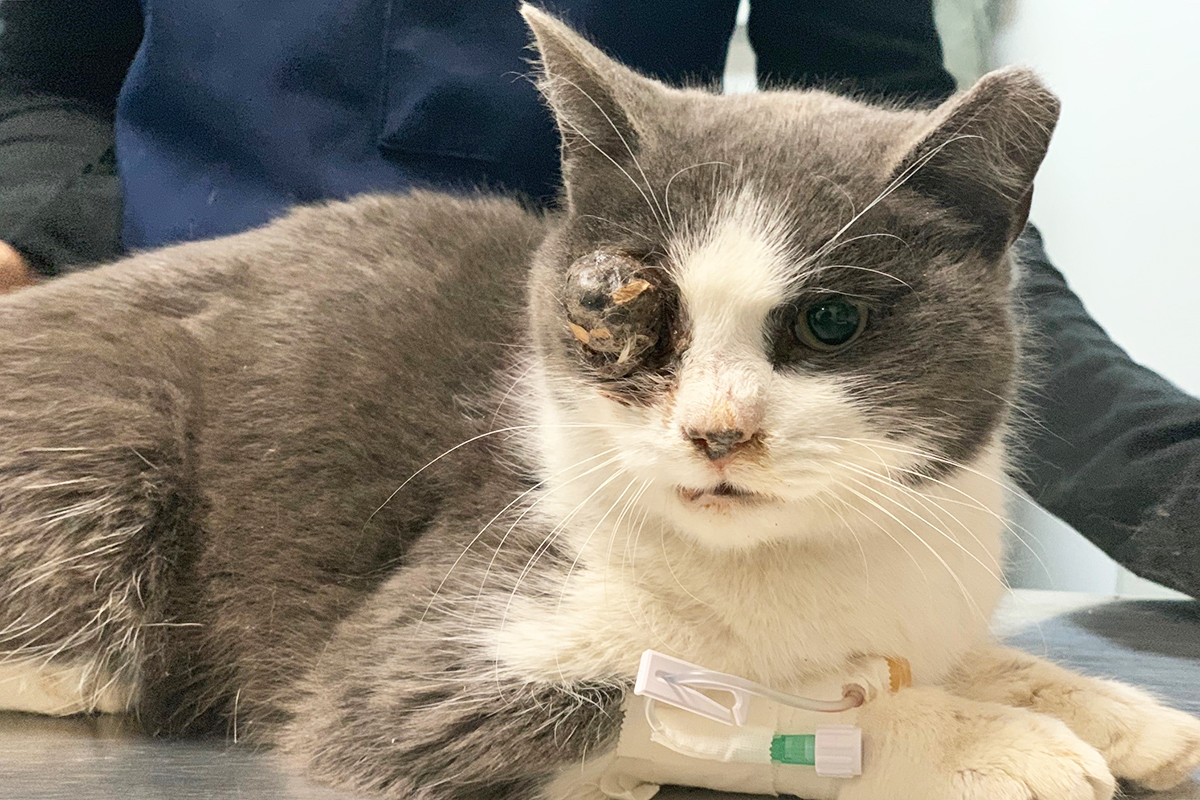