Abandoned Terrier Mix Looks to You For Help

Scooter healed well from his surgery to correct his knee cap that popped in and out of place.  While he was recuperating in the Grooming Department at Animal League America, he found a best friend in Jackson, a senior Chihuahua mix. Jackson’s owner became ill and could no longer care for him. Staff and volunteers would always see them being walked together throughout the Port Washington, NY campus. Scooter, who loves all people, helped Jackson become calmer and accept attention more easily from strangers. 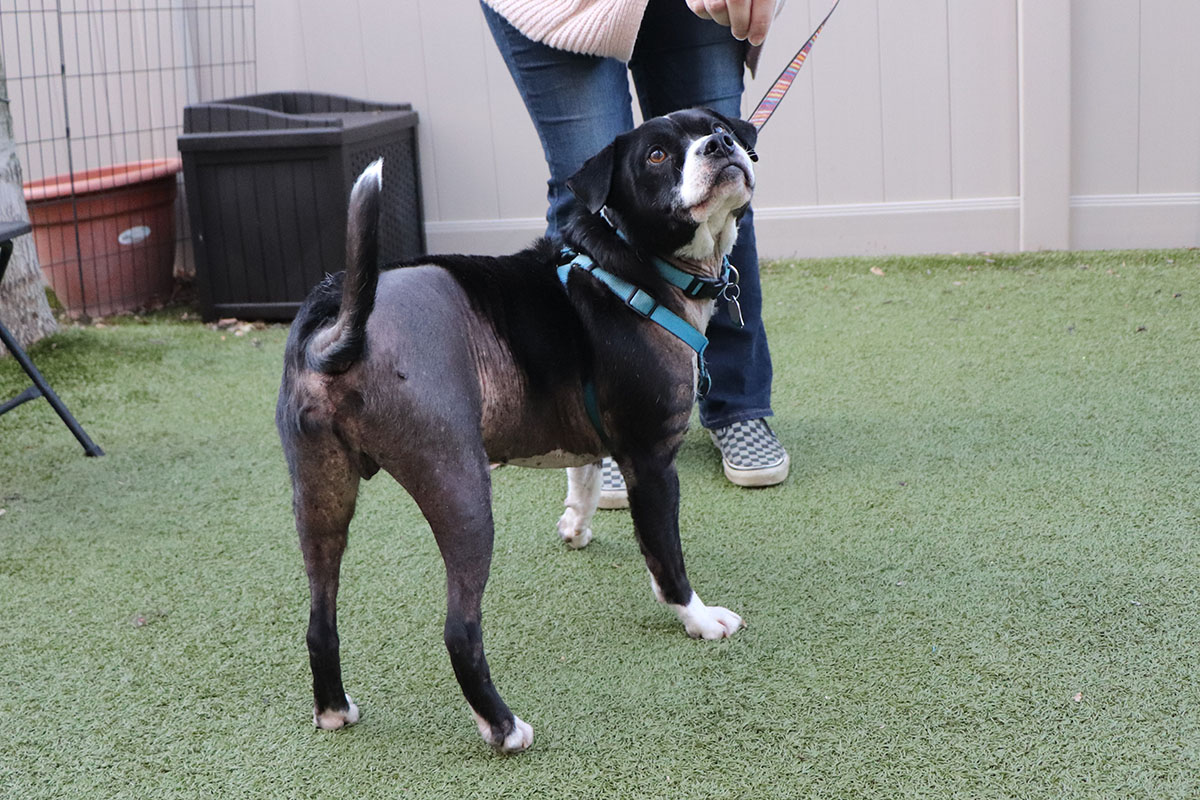 When they were both ready, Scooter and Jackson found themselves in the Adoption Center together. They were in two kennels near each other. Jim and his girlfriend had seen their photos on the Animal League America website.  Now they were able to meet them in person and hear their stories. Jim immediately called his mother as he knew she’d been sad without a dog in the house since their Labrador Retriever mix passed away earlier in the year.

Alison came down to the Adoption Center and just loved both dogs, too. So that’s when the happy decision was made to adopt them both together! “I thought about the saying ‘Grief is love that has no place to go,’” said Alison. “My heart opened up and I wanted to take both of them home with me.” Before the dogs went home with her, staff put together some of their favorite blankets and toys. They also showed her Scooter’s letter to Santa where he had wished for “a home and a family to love.” 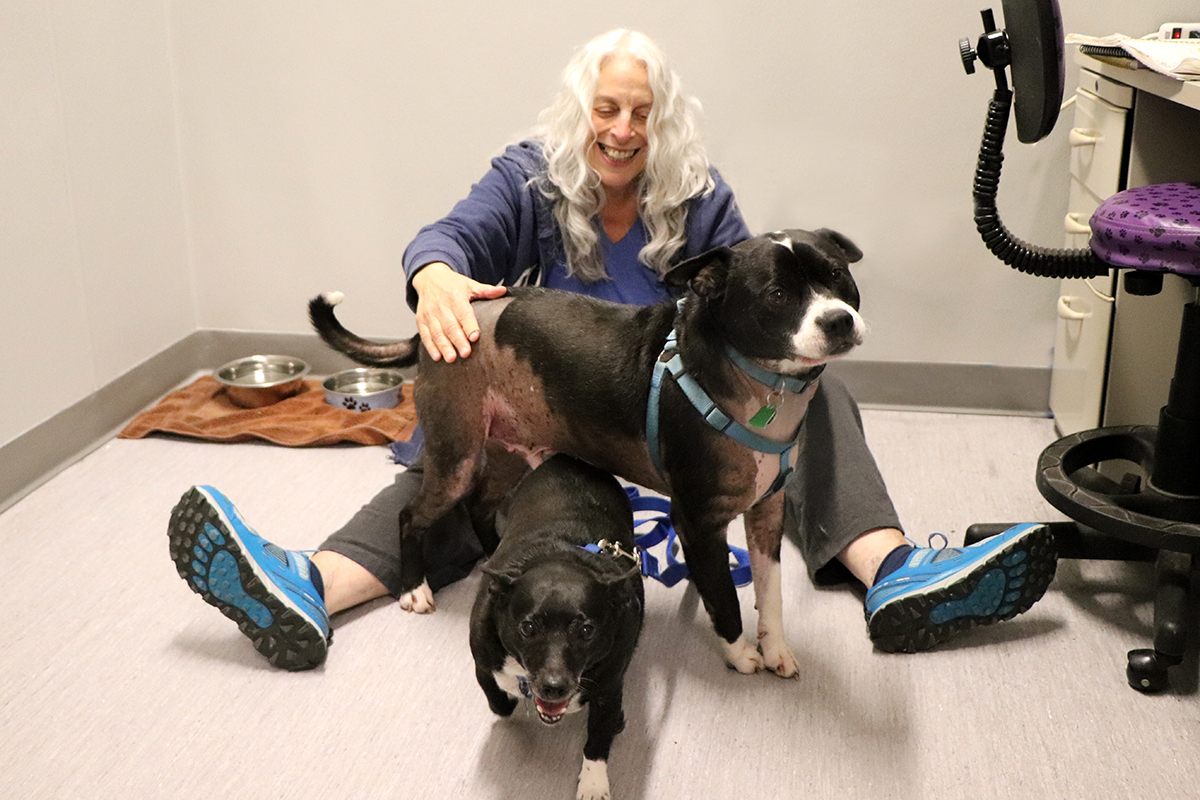 “Jackson and Scooter are characters. They have taken over and I think they’re happy here,” exclaimed Alison. “I love them both already.  If I sit down, they both climb all over me.  My heart was missing this.” Scooter has taken everything in stride—his personality is very easygoing.  Jackson was anxious at first, but Alison said that she wrapped him up in her sweatshirt and cuddled with him on her lap and now he’s doing fine.

Alison has noted that they are definitely attached to one another, but they also like their space. They do sit together and look out the big, front window and Jackson is the one that barks at everything. Scooter doesn’t want to walk outside unless his friend Jackson goes along too. 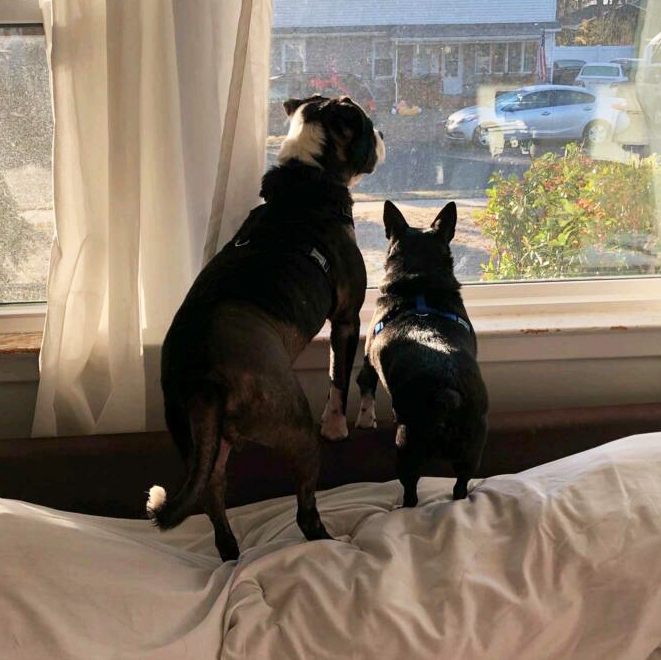 Jackson just loves her son, Jim. “He climbs all over him when he visits and kisses him. Then he sits on the floor between his legs and doesn’t move,” said Alison. Scooter, Jackson, and Alison are getting into their daily routines with feeding, walking, and going out into the backyard.  Alison is so glad that they found each other — they make her house feel like a home again.

Scooter is looking like a brand new dog these days. He continues to roam the grooming department where he received his medicated baths for his skin infection and has become quite the favorite for all who stop by. Scooter greets his friends with a wag and a playful bow to let everyone know how happy he is to see them.

While his skin has healed nicely, Scooter’s hair is taking a little longer to grow back in some places. This is quite normal for an infection that was as severe as Scooter had and he is currently on melatonin supplements to help with his hair growth, which could take several months.

Since Scooter’s skin has cleared up, doctors at our Pet Health Centers are preparing for Scooter to undergo MPL surgery on his leg. This will help ease the discomfort caused when his kneecap pops out of place. 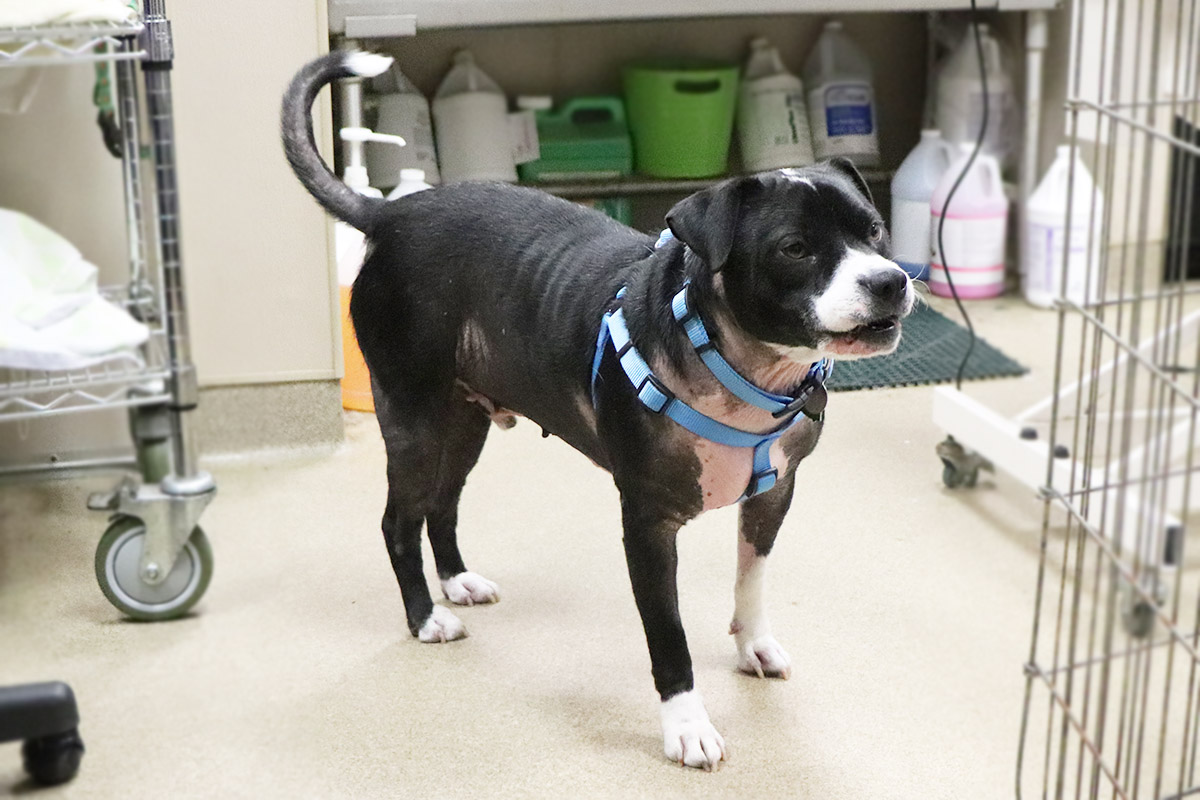 Thanks to the support of our Help Me Heal Program, this playful pooch will get all the medical care, and rehabilitation he needs to lead a normal, pain-free life, and someday find a loving, responsible home of his own. Please continue to support this vital program that changes lives every day.

Thanks to the loving support from all of you, Scooter has made outstanding strides towards a full recovery. Following the treatment plan assigned by the veterinary staff inside our Pet Health Centers, Scooter’s demodectic mange has begun to heal nicely, with his furry coat showing growth each and every day. He still has areas on his body that need to grow back, but overall, he has shown great improvement. 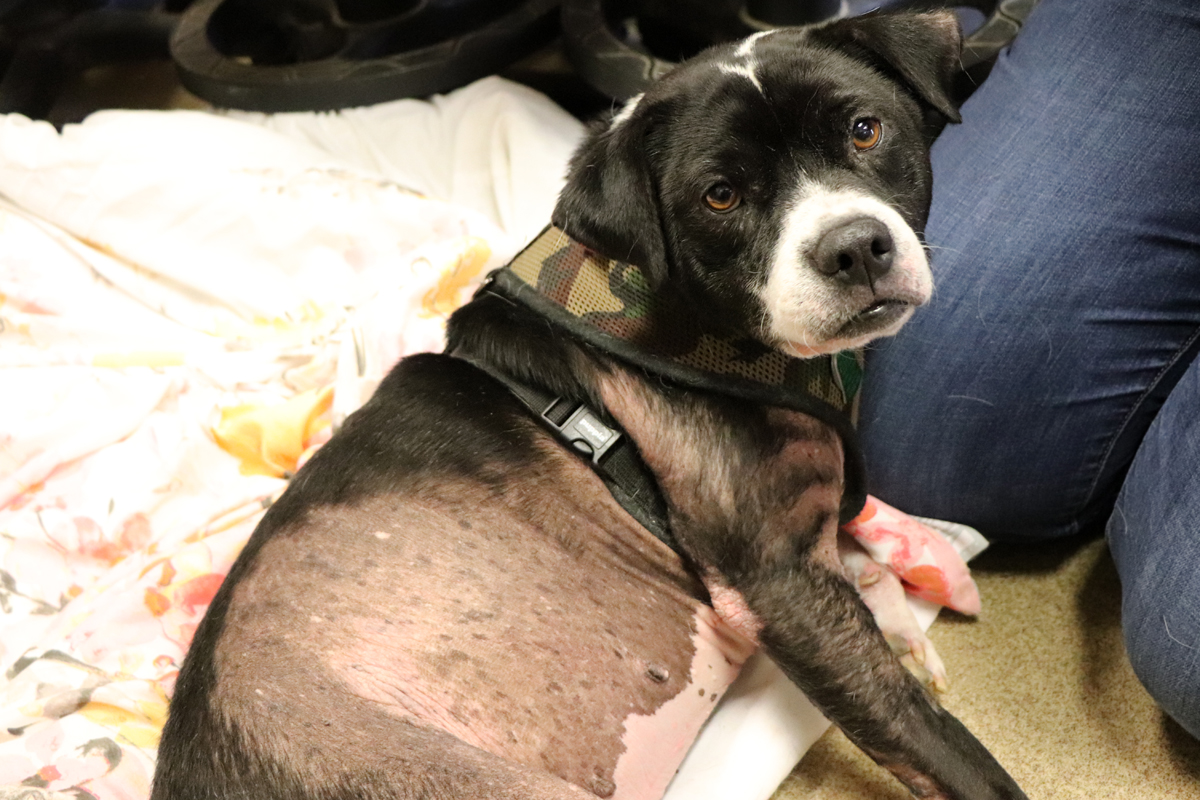 However, Scooter did develop pneumonia recently and had a few extractions of broken teeth, but these complications didn’t bring Scooter’s spirits down! He is still his eager, playful self. While in recovery, doctors also determined Scooter will require surgery to fix the luxating patella in his leg. The surgery is planned to take place once Scooter is completely healed from the mange.

Scooter’s road to recovery has only been possible because of the generous support to the Heal Me Heal Program. Scooter is in great hands, but still needs your continuous support to make a full recovery. Donate today so Scooter, and other animals like him, can go on to live happy, healthy lives. 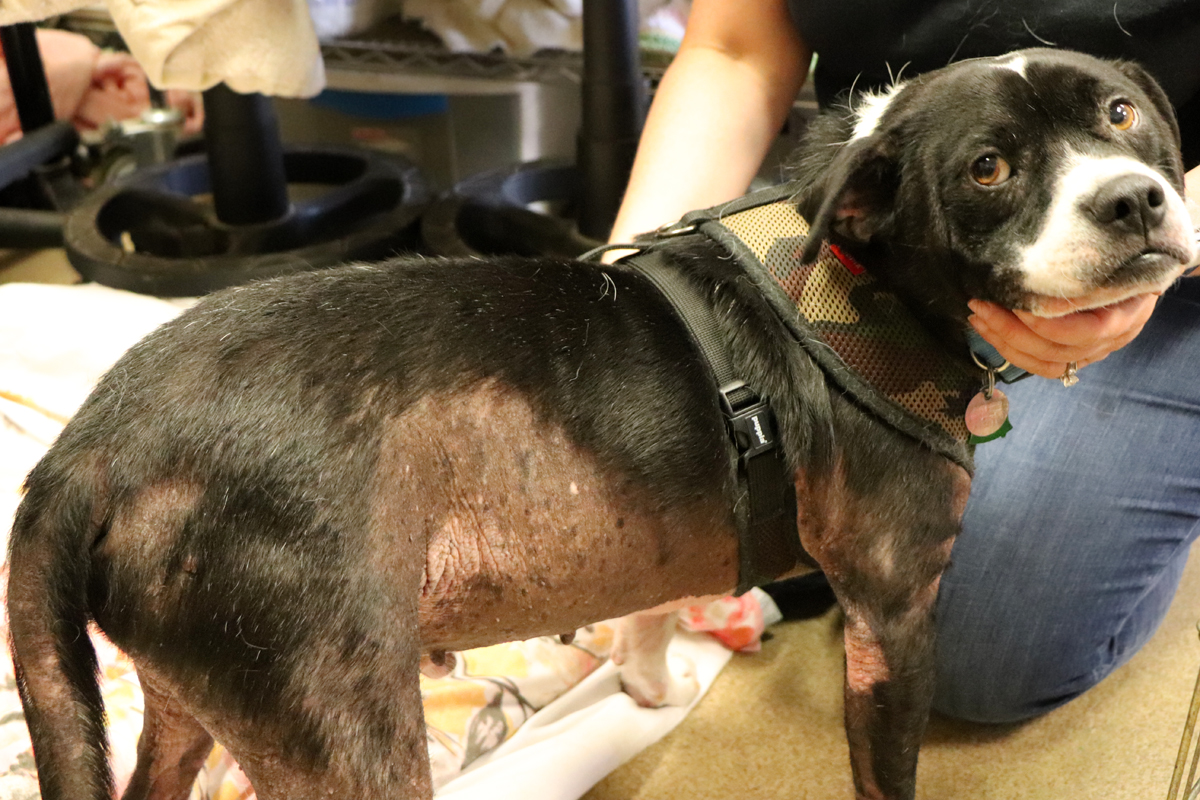 Found abandoned in a pop-up trailer down South in Mountain City, Tennessee, Scooter was thankfully brought from our rescue partner to North Shore Animal League America. This sweet seven-year-old terrier mix was found suffering in immense discomfort, with little hair covering his red-colored body and face. Despite his distressing pain, Scooter was still radiating with friendliness and affection— as described by Dr. Marina Tejada, supervising veterinarian at our Pet Health Centers, “He’s super, super sweet, and probably one of the friendliest dogs I’ve ever met.” 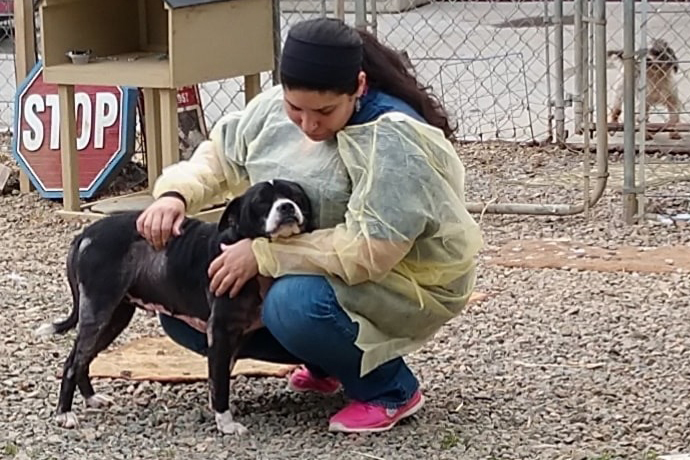 Originally, Scooter wasn’t supposed to be on our transport, but our rescue team instantly fell in love with him and decided to make room for one more. He was taken to the veterinarian to receive a rabies vaccine right away and then brought to our Port Washington, N.Y. campus, where he will be able to heal and receive care and compassion from our dedicated team.

After being examined, it was determined that Scooter suffers from an extremely uncomfortable and painful skin disease called mange. Mange is caused by the mite demodex that lives in the skin of dogs, which in most cases doesn’t cause an issue. However, Scooter’s immune system had previously been compromised, allowing this demodex to grow and cause his hair to fall out, leaving his small, weakened body almost bare and unbearably itchy. Without proper care, Scooter was entering an endless and painful cycle of itching, losing more hair, and becoming more red and uncomfortable, while the bacteria and fungus continued growing. 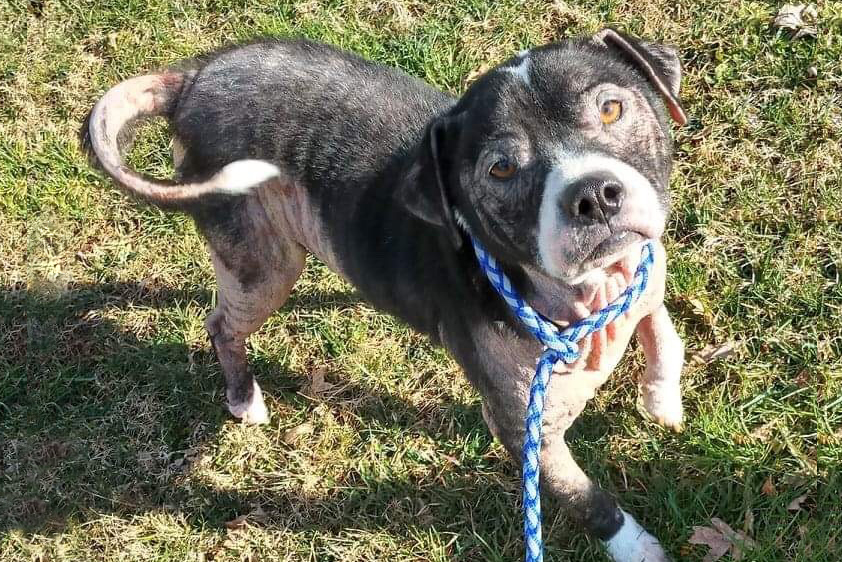 Donate today to give neglected and abandoned animals the lifesaving care and compassion they need — and deserve.

Scooter also suffers from a luxating patella, which as Dr. Tejada stated, means “his knee cap slides in and out of place.” It is unlikely that Scooter will need surgery, although it is possible that his knee will at times pop out and pop back into place. The doctors will continue to keep an eye on it. Despite Scooter’s pain, he remains happy and playful, and his tail seems to never stop wagging!

Scooter will begin to receive treatment to kill the demodex mites, including antibiotics and anti-fungal medication to stimulate the regrowth of his lost hair. To further promote the regrowth of his skin and hair follicles, as well as ease his discomfort, Scooter is also going to receive medicated baths by our loving staff to help his healing progress. 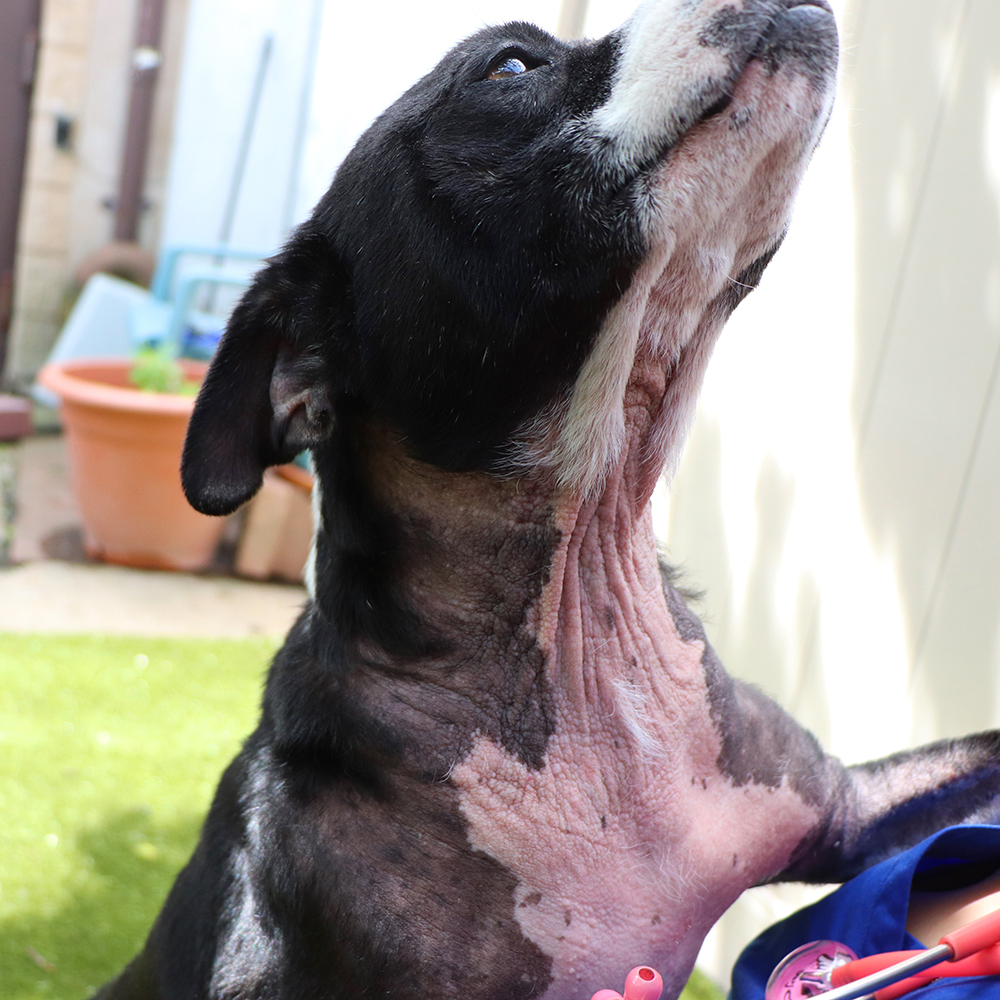 As a member of our Help Me Heal Program, Scooter will remain in our Pet Health Centers, receiving round-the-clock care. However, Scooter’s treatment will still be an ongoing process covering several weeks. Each and every day he will bravely make small strides towards a complete recovery. But, Scooter needs your help to make those strides happen. Your donation today to our Help Me Heal Program will provide Scooter, and countless other animals, with the urgent medical care he needs to be happy, healthy, and pain-free.

Be a hero. Be his hero. You can be there for Scooter today and throughout his recovery! 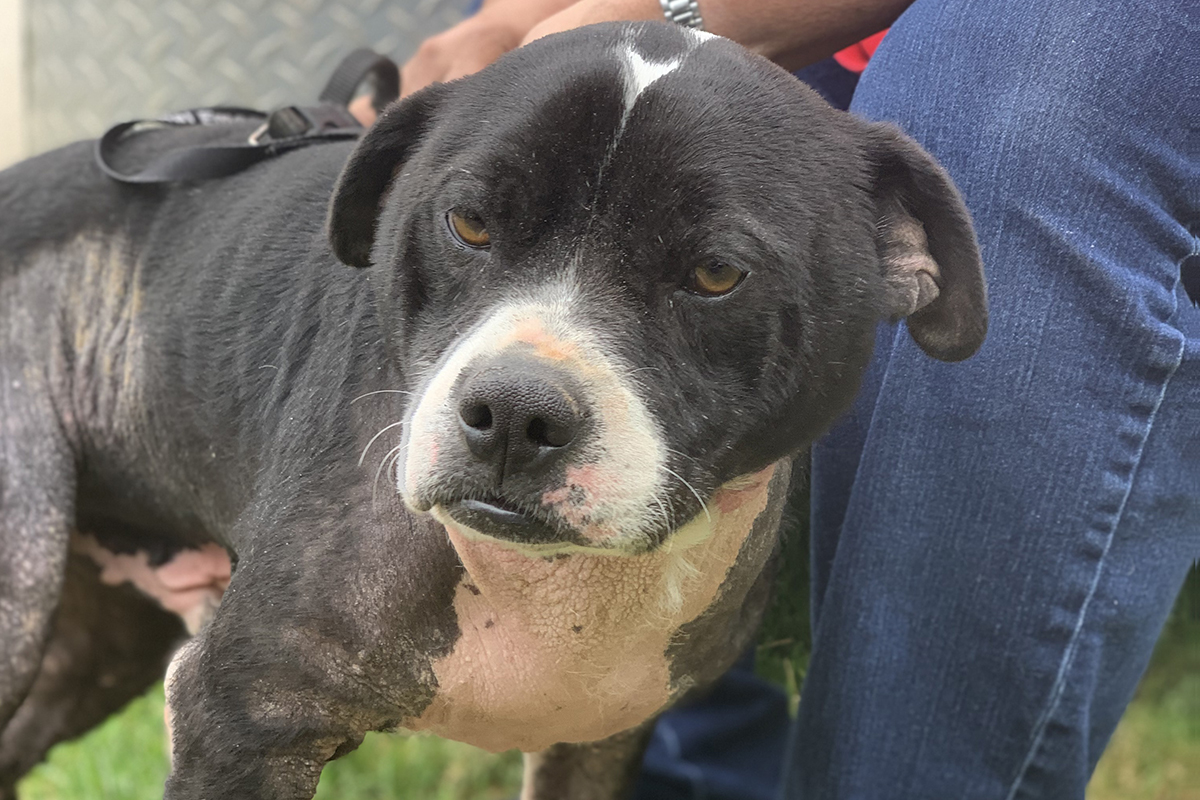