Sushi, the adorable kitten rescued in Brooklyn, with multiple leg fractures had been doing well. Her splints had been removed and she was even walking around her cage. But then Sushi stopped walking completely. “Sushi was doing great — all four fractures had healed and she had been walking. Then suddenly she was acutely not able to walk,” said Dr. Verdino. “We x-rayed her and she had broken both of her femurs near her hips. We also noted what looks like a healing fracture lower down in one of the femurs.” 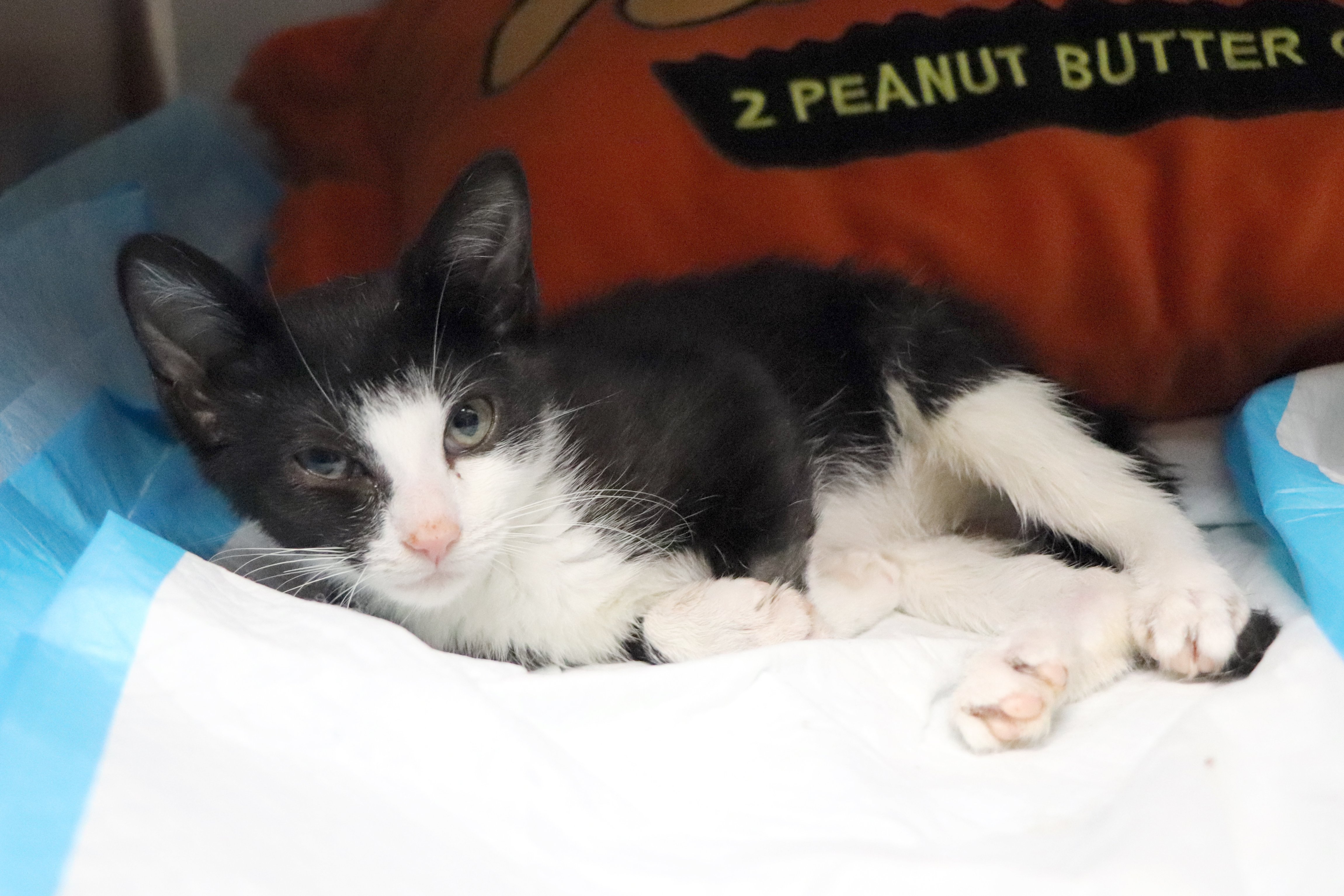 He believed that she might have brittle bone disease (osteogenesis imperfecta), but ordered more lab tests to try to determine which of several other possible conditions could be causing more bones to break such as hyperparathyroid disease, rickets, or other nutritional deficiencies. If she does have brittle bone disease, Dr. Verdino affirmed that her “prognosis is grave.”

The lab results came back and they ruled out “the treatable diseases of rickets, hyperparathyroid disease, and nutritional deficiencies.” Unfortunately, this confirmed the diagnosis of brittle bone disease and this was not what everyone wanted to hear.

This genetic abnormality affects collagen production in the body and this significantly effects bone strength and density. It occurs in humans, cattle, dogs, and cats. Common signs include pain, lameness, and issues with the gait plus fractures occur with minimal or no trauma.

Sushi had not fallen, or run too fast, or jumped too high to cause these additional fractures. They occurred because her bones were not strong at all. “Sushi is in pain and will continue to break more of her bones. The best, most humane thing to do for poor little Sushi is to put her to sleep,” said Dr. Verdino sadly.

All of Animal League America’s staff members are mourning her loss. This is the most difficult part of rescue. But, at least, she didn’t die alone and suffering on a city street. Here, for the first time in her short life, she felt love and compassion and was given excellent care — care that you helped us provide for her. Her brave and feisty spirit will live on in all of our memories.

The plea came early on a Monday morning from staff at Animal Care Centers in Brooklyn. Could North Shore Animal League America help a young kitten with hind leg fractures in possible need of surgery? Sushi had been found in a sewer. She was filthy and dragging her back legs behind her.

The plea came early on a Monday morning from staff at Animal Care Centers in Brooklyn. Could North Shore Animal League America help a young kitten with hind leg fractures in possible need of surgery? Sushi had been found in a sewer. She was filthy and dragging her back legs behind her.

Our Rescue Team rushed to pick her up and bring her back to our Pet Health Centers. Time is always important with orthopedic injuries — they usually need to be fixed before they start healing incorrectly.

“After x-rays at Animal Care Centers, Sushi was diagnosed with bilateral fractures of the tibia and fibula—two bones in the lower leg—in about the same location in the bones,” said Dr. Mark Verdino, Senior Vice President and Chief of Veterinary Staff at Animal League America. “I’m not sure what happened to her, but most likely a fall from a high place and the legs broke when she landed.”

Otherwise, upon examination, Dr. Verdino felt that Sushi was in good health considering the sad start to her life. The staff says that she’s a bit feisty and may be semi-feral. It seems like she wasn’t anyone’s kitten, just a stray from the streets of the city. “Sushi is a little bit fearful of people,” stated Dr. Verdino. “But even in the day or so that we’ve had her, she’s calmed down. I think she knows that we’re trying to help her out.”

Your support today will give Sushi, and other sick or injured animals, the urgent medical care they desperately need. 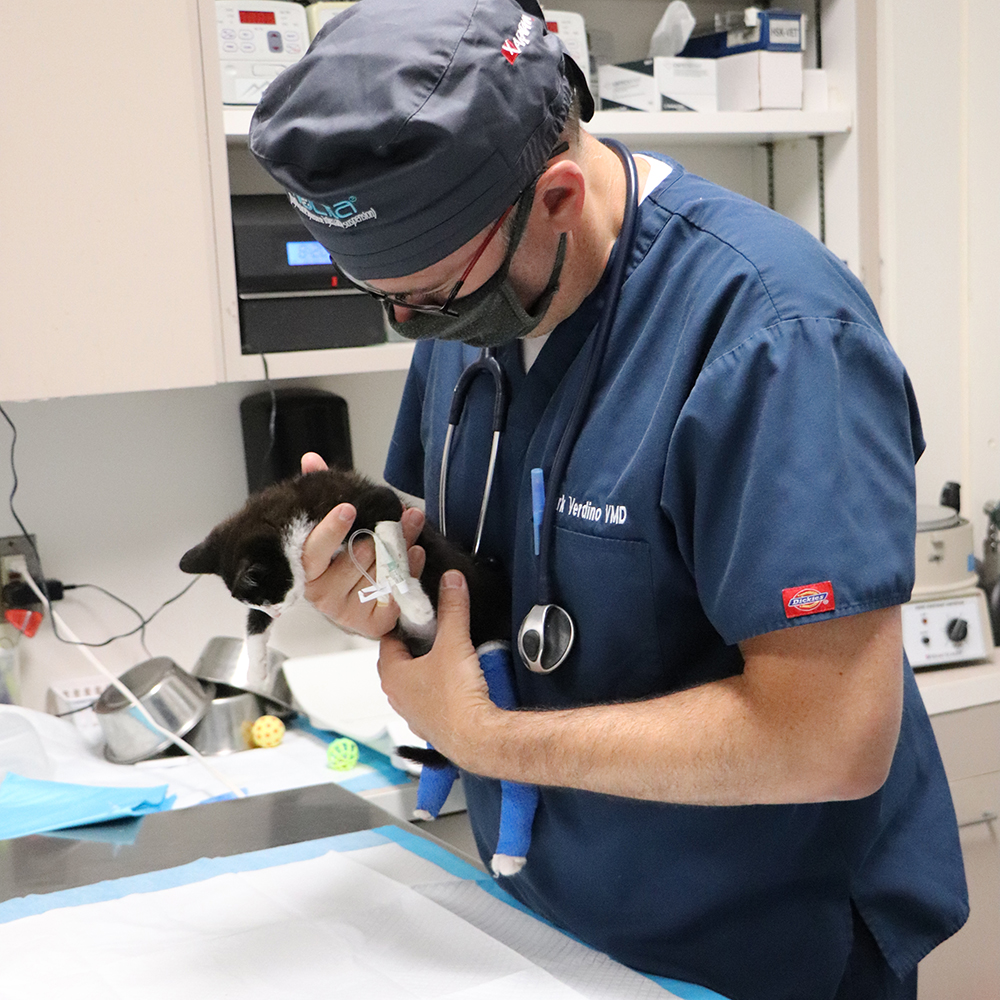 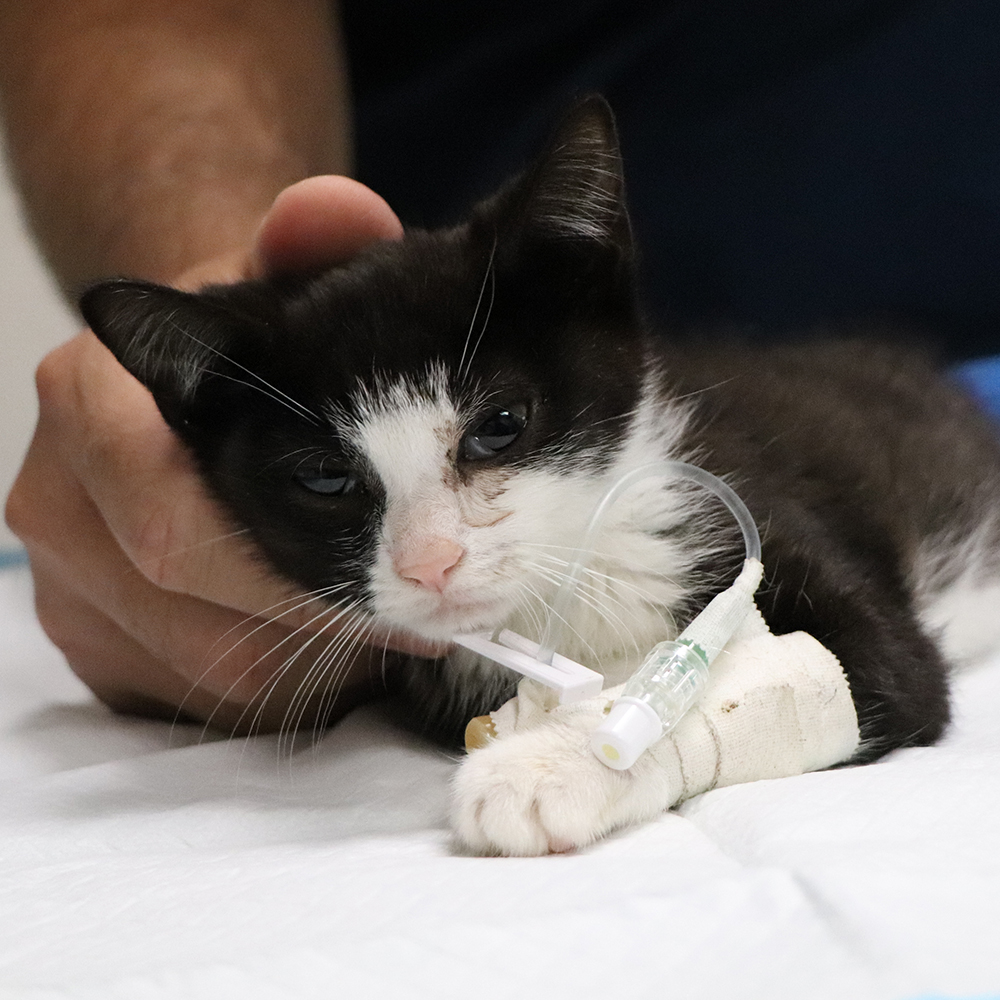 The plan next was to sedate her and take more x-rays. Dr. Verdino may proceed to try to surgically stabilize the fractures while Sushi is already under anesthesia. However, with small kittens, the veterinarians are concerned about keeping them under anesthesia for too long of a period as they can get hypothermic (their body temperature can drop rapidly). So, depending on how Sushi does, she may just repair one leg first. The repeat x-rays are critical in determining what the next steps will be in Sushi’s care.

Unfortunately, the repeat x-rays revealed something unexpected. Poor little Sushi has fractures in all four legs! One front leg just has a green stick fracture, meaning the bone is intact or not broken into two pieces. The other three are completely broken. “None of them are significantly displaced and there seems to be fibrous bridging already, which indicates that the fractures are likely a week old,” stated Dr. Verdino. “So we opted to splint the legs rather than operate. Once healed, in about four weeks or so, the splints will come off. Then Sushi will likely require rehabilitation to walk. 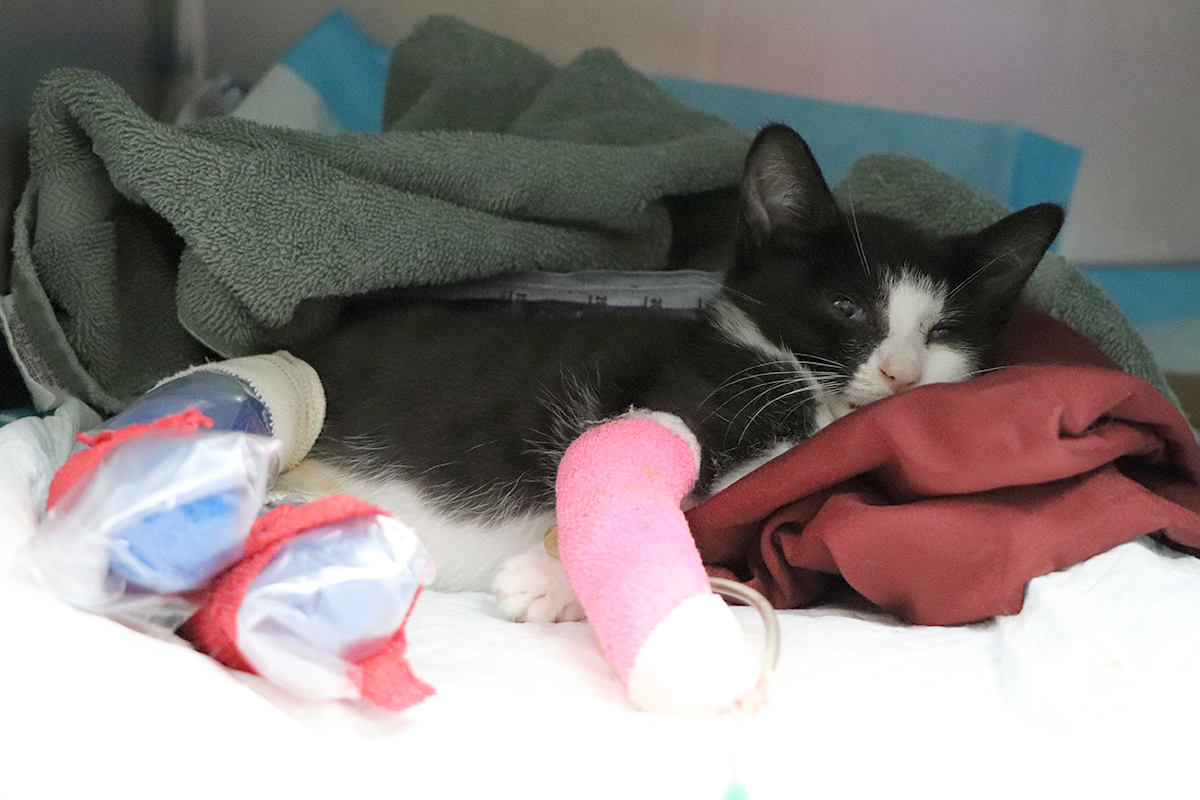 For such a young kitten, surviving alone on the streets with such a painful injury is remarkable. As a member of our Help Me Heal Program, Sushi will never be alone again. Your support today will help Sushi get the urgent medical care she needs, and the chance to find the life she deserves – as beloved companion animal in a home of her own.