Give Miley the Gift of a Second Chance

Neglected and alone. Left to wander the streets of Brooklyn with no food, water, or shelter. Suffering from a painful skin condition that left her without a coat to keep her warm during the frigid December nights. This was the tragic life of poor Miley, a 6-month-old Pit Bull mix, before she was picked up and brought to a municipal shelter in New York City. 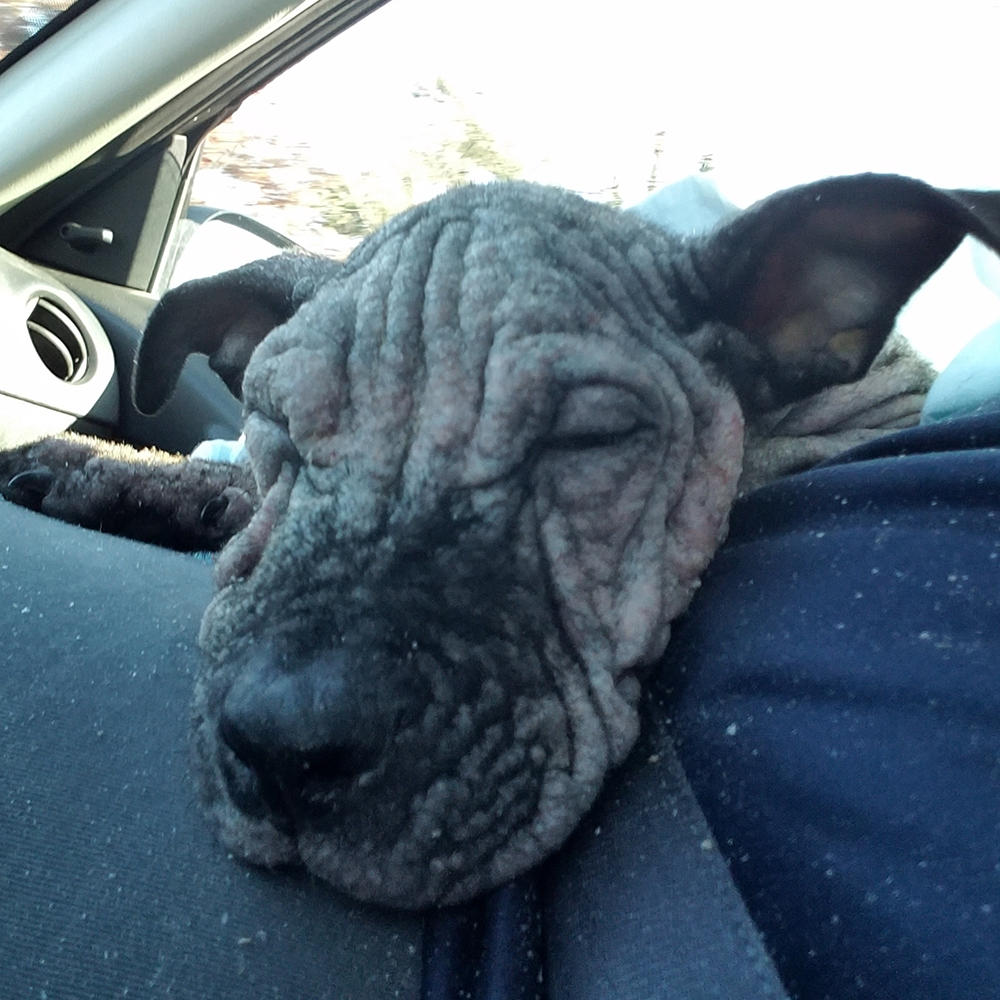 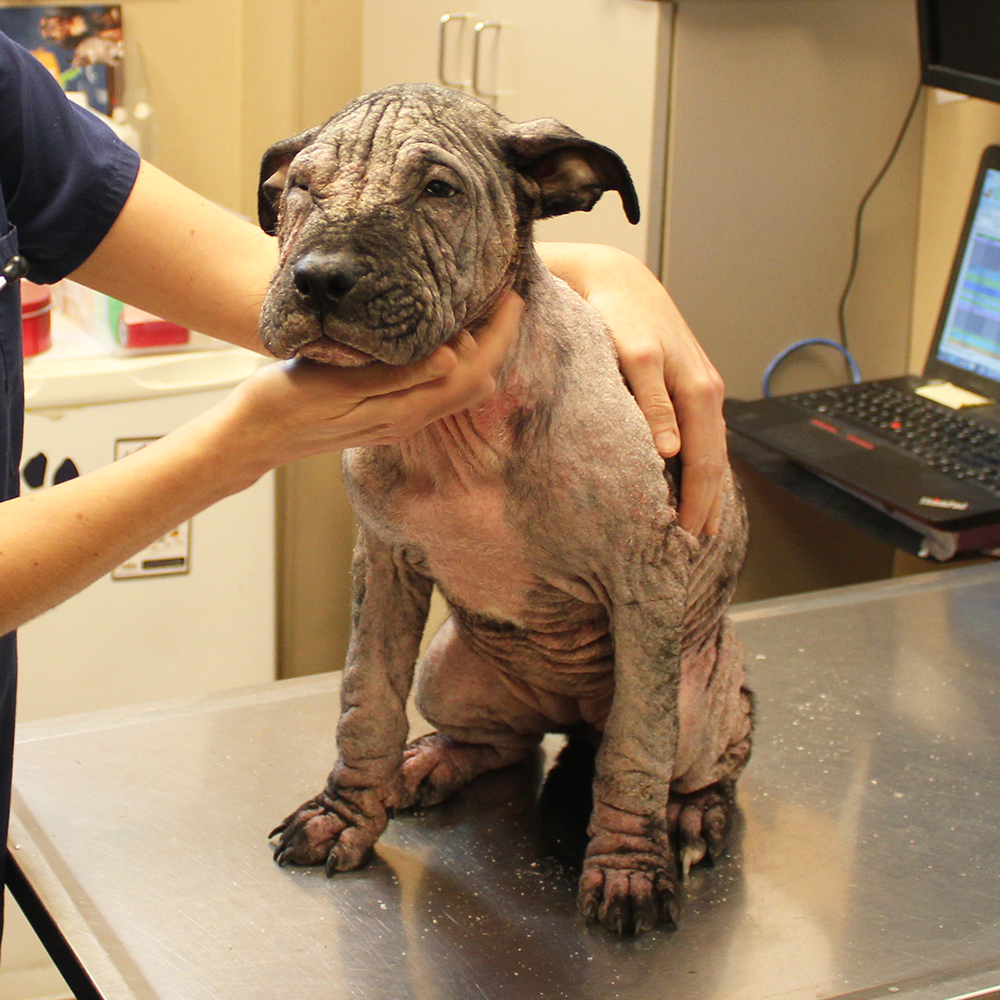 Luckily for Miley, North Shore Animal League America’s Emergency Rescue Team was notified about her story and sprang into action to save her life. Within hours, she was quickly transported back to our Port Washington, N.Y. campus by two members of our Rescue Team, and enrolled in our one-of-a-kind Help Me Heal Program.

Once in the care of the medical team inside our Alex Lewyt Veterinary Medical Center, Miley was given a full examination. Her entire body, including her head and face, was almost completely void of any fur and covered with open sores and painful wounds. Her tiny right eye was swollen shut due to an ulcer, and it was discovered that she had a significant heart murmur.

“Miley has a Demodex mange infection with secondary bacterial and yeast infections. Demodex is a type of mite that is typically found on dogs, and in times of stress or illness, these mites can overgrow on the skin in the hair follicles causing it to fall out,” said Animal League America Veterinarian, Dr. Erin Carney. “She also has a condition with one of her eyes called entropion. This is when a portion of the eyelid is inverted or folded back, causing irritation and ulcers. This condition could improve as the inflammation on her face goes away, or it may be a congenital defect that will have to be repaired surgically.”

As far as Miley’s heart condition is concerned, Dr. Carney said that the murmur is quite substantial, but once she is seen by a cardiologist and undergoes an echocardiogram, the team of doctors will have a more concrete diagnosis and figure out a course of action.

There was no question that Miley was in desperate need of the compassionate, individualized care that only the world’s largest no-kill rescue and adoption organization could provide. Thanks to our passionate supporters and generous donors, this innocent girl and other animals just like her, will receive everything they need to heal and grow into a happy, healthy Mutt-i-grees!

Your donation today can help Miley and other sick, neglected, and abandoned animals get the lifesaving care they need – and the compassion they deserve.

“We’re going to treat her Demodex with medicated baths, antibiotics, and antifungals to treat the secondary infections. These infections can take quite a few months to resolve, so we’ll regularly be checking skin scrapes. This allows us see the mites under a microscope and then adjust her medication doses accordingly,” said Dr. Carney. “Of course she’ll get lots of love and pampering from our entire staff here, who have already fallen in love with her. She’s so sweet and will be the perfect pet once she’s all better.”

Your generous support of our Help Me Heal Program makes it possible to provide animals like Miley with the absolute best care and compassion available, and help keep it available for the next animal in need. Your donation today helps to support our no-kill work and gives a chance at life to so many in need. 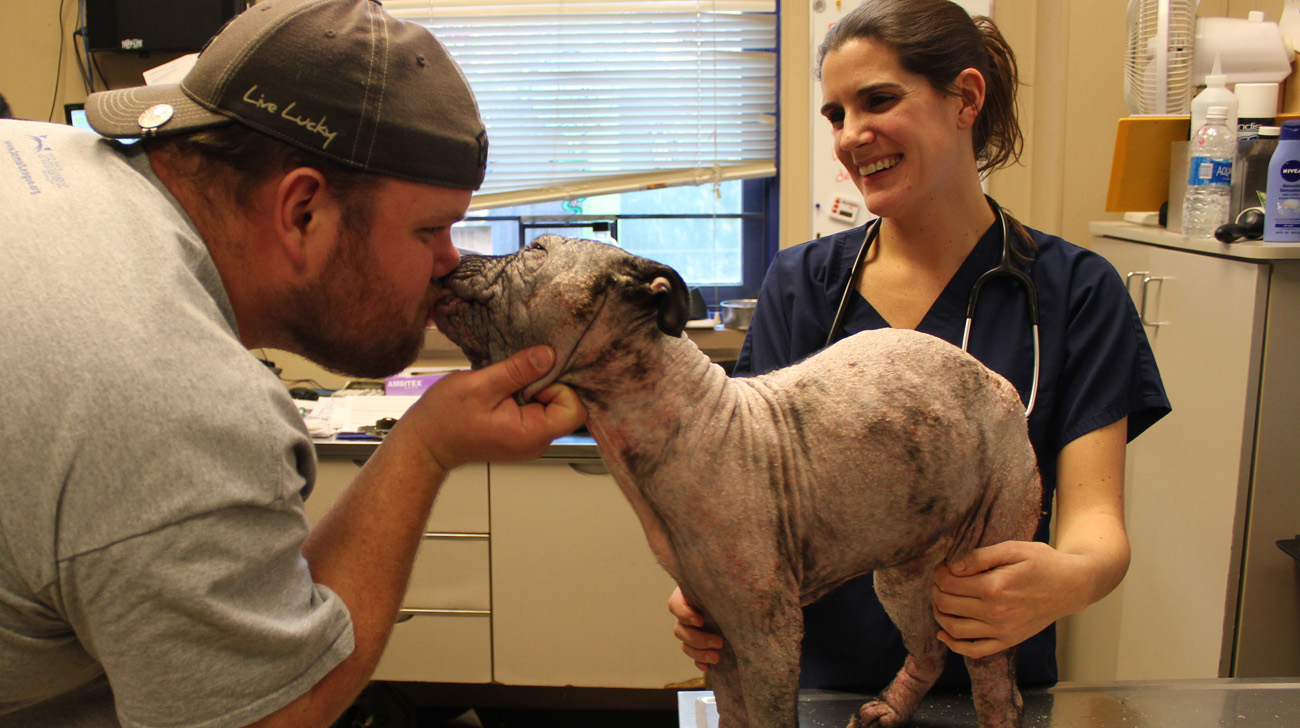 UPDATE, January 18, 2017: Miley Steals the Hearts of the Gander Family 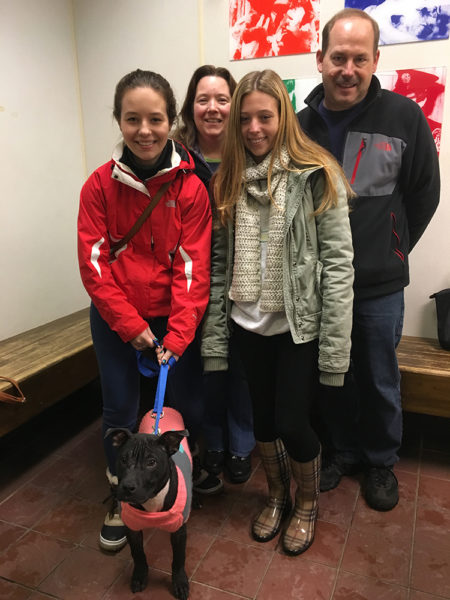 After spending about a month in the compassionate care of Animal League America’s medical and shelter teams, Miley’s health continued to improve, so much so that she was placed on the adoption floor in early January. It took just two hours for the adorable rescue to steal the hearts of a local family in search for the perfect family pet.

When Melissa Gander and her family walked into our Port Washington, N.Y. Adoption Center they weren’t exactly sure what they were looking for. Melissa knew they wanted a younger dog who was affectionate and good with other animals because they already had a cat and a dog at home, but details like breed, sex, and physical appearance wasn’t a concern.

“We knew we’d just know when we saw the right dog,” she said.

That moment came much sooner than Melissa and her family could have ever imagined. After passing just a few cages inside our adoption atrium, the Ganders stumbled upon the adorable black Pit mix who would melt their hearts with her puppy dog eyes and spirited story of resiliency.

“We followed Miley’s story on Facebook and on Animal League America’s website, but we didn’t know she’d be up for adoption. When we walked up to her cage on the adoption floor I was shocked to see her,” Melissa said. “She was just lying on her little bed just looking up at us with those sad puppy dog eyes and immediately I was sold. We knew from that moment that she was going to be part of our family. It was funny because we were told she was placed up for adoption just a few hours earlier, so I guess it was meant to be.”

Now officially part of the Gander family, Miley is enjoying life in her new home. She gets along great with her canine and feline siblings, enjoys going on long walks and meeting new people, and never passes up a chance to give a sloppy kiss to anyone who bends down to say hello. Melissa said she and her family were looking for an affectionate, socialized young dog when they came to Animal League America, and it looks like they found exactly what they were looking for and then some.

“We honestly couldn’t be happier that we adopted her. For a dog who’s been through so much at such a young age, she’s the sweetest, spunkiest little dog you’d ever meet. We’re so thankful to North Shore [Animal League America] for saving her.” 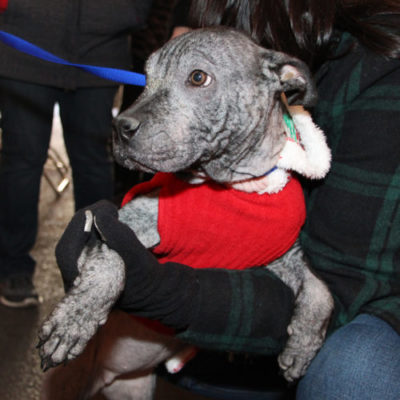 After being enrolled in our one-of-a-kind Help Me Heal Program, Miley’s Demodex mange was treated with regular medicated baths, antibiotics and antifungals, and of course, a lot of TLC from everyone in our medical center and shelter. She was also sent to a cardiologist to undergo a second echocardiogram after the initial diagnosis, which determined that her heart murmur was not as severe as once thought. When she wasn’t visiting her veterinarian pals, Miley spent her days and nights with Adoption Counseling Team Leader Lauren Trautwig and Counselor Meri Vrankovic in their team’s cozy office.

“As soon as the Rescue Team brought her in, we all immediately fell in love and wanted to take care of her. She’s just so cute and sweet, there was no way we were letting her stay anywhere else but our office,” Lauren said with a laugh. She, Meri and several members of the grooming department would regularly dress Miley up in warm, comfortable shirts and jackets to keep her warm during the cold winter days, but also served to skyrocket her cuteness level to astronomical highs.

“We also made sure she always had a very comfortable bed and was treated like the princess she is for the month she was with us. She was certainly spoiled.”