Take a walk through the Alex Lewyt Veterinary Medical Center on our Port Washington, N.Y. campus and you’ll see our medical staff tending to animals with a variety of illnesses, injuries, and ailments. One example of an animal that arrived at our campus in desperate need was Yogurt. The adorable young Shi Tzu who arrived from Animal Care & Control of NYC in an immobile state, barely able to lift his head as a result of a spinal cord injury.

Thanks to the highly skilled surgeons at Animal Medical Center in Manhattan, Animal League America’s Foster Care Program and our one-of-a-kind Help Me Heal Program, Yogurt was able to receive the corrective surgery and rehabilitation he needed to make a miraculous recovery. Now, just seven months later the diminutive dog with the GIANT personality has received another gift – the unconditional love of a family who can’t imagine their lives without him.

“He came in for a surgery consult, and I just really felt a strong connection to him,” said Meghan Kirsch, Resident in Surgery at Animal Medical Center. “He has such a charismatic personality, so you can’t help but to fall in love with him. When I heard that North Shore [Animal League America] was looking for someone to foster him, I jumped at the opportunity after discussing it with my wife, Annia. Not even a week after I took him home I knew he was going to be a permanent fixture to our family. Now he’s just part of the family and he’s spoiled rotten!”

Meghan and Annia adopted Yogurt soon after opening their home to the recuperating pup. His spunky personality, love of being around people, and the seemingly instant bond he forged with the couple’s other rescue dog, Ambrose, made Yogurt the ultimate addition to the family. Not only did Yogurt and Ambrose, a German Shepherd/Pit bull mix, quickly become pals, but the two share toys and bones, and even occasionally share a bed. From the day he arrived on Animal League America’s campus, suffering badly, unsure what the future had in store for him, Yogurt always found a way to connect and show his appreciation. Today, Yogurt has formed a bond with his new parents and canine sibling that grows stronger every day – even the family cat, Snickers, doesn’t mind having Yogurt around. 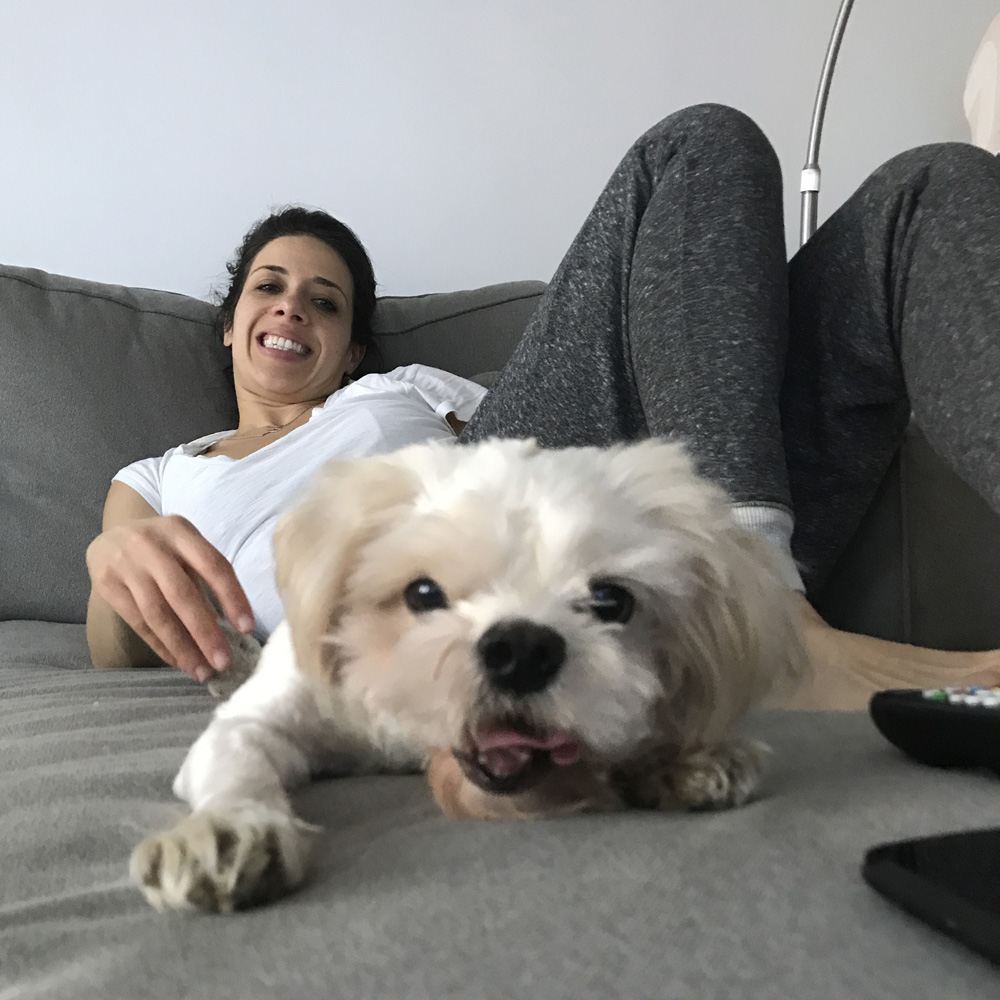 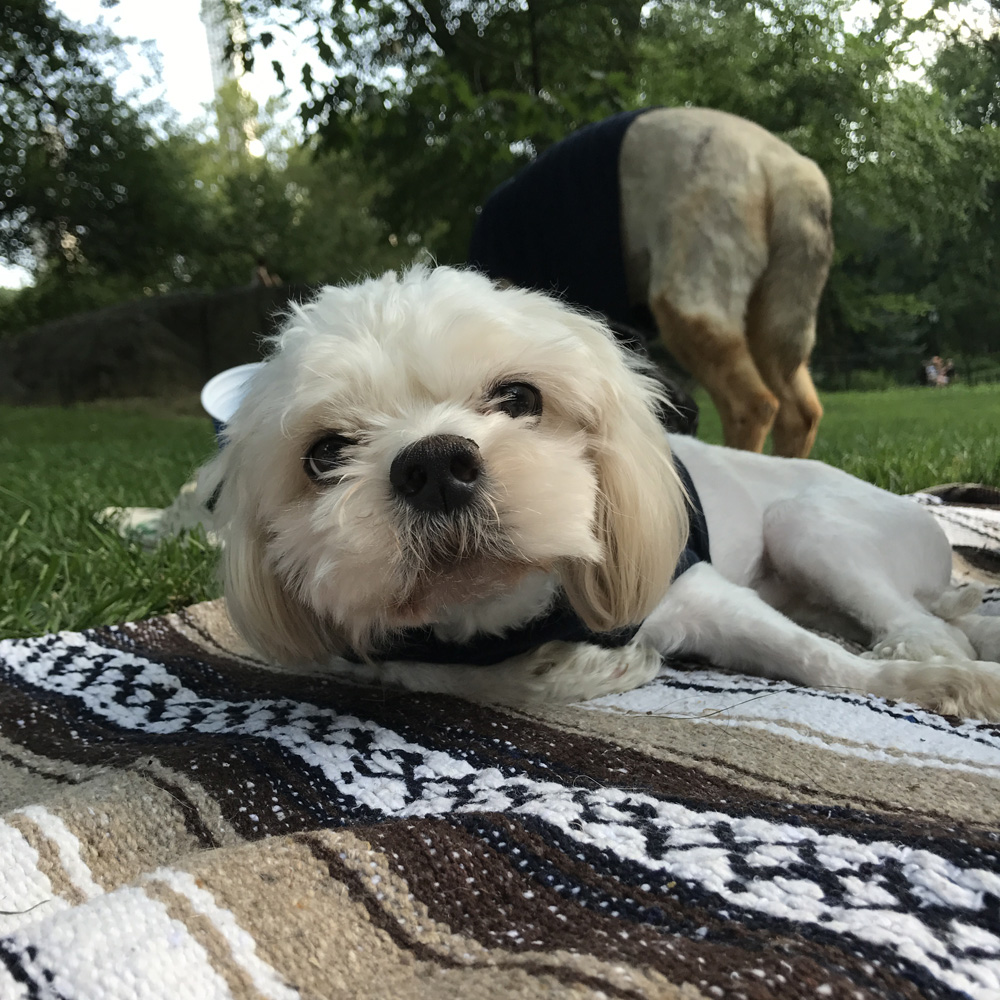 “The first time I saw Yogurt he was sprawled across Meghan on the couch. I totally had forgotten that she was bringing him home that day, so when I came home from school and saw him it was a pleasant surprise. He’s so cute and such a good dog,” said Annia. “Now, he’s with me all the time and I just love him so much. I thank Meghan every day for fostering him and bringing him into our lives.”

Continued physical therapy plus a lot of TLC have allowed this once gravely injured pup’s mobility to drastically improve over the last few months – so much so that he just figured out that he’s healthy enough to run! Not long ago he began cruising around the apartment, which was recently furnished with carpet runners for better grip, stopping only when it’s time to eat or lounge on the couch. Another one of Yogurt’s favorite new pastimes is exploring Central Park and making new friends, of both the human and four legged variety.

Your donation today can help sick, injured, and neglected animals receive the lifesaving care they need – and the compassion they deserve.

“He’s very popular around the neighborhood. Everyone here is always asking about him and checking in on him. They are always amazed at the progress he’s made since he’s been with us,” said Annia. “He loves the outdoors, so we’ve been taking him to the park a lot. He’d walk a little further every time we went, but now there’s no stopping him. He’s still a clumsy, but he’s always up on his feet and making progress.”

Animal League America would like to send a big thank you to all of our generous supporters who helped Yogurt heal! Without your help this little guy would have never had the chance to live happily ever after with his new family!

Recently we received a call from Animal Care & Control of NYC asking for our help tending to a homeless animal in desperate need of medical attention. Yogurt, a young Shi Tzu mix, believed to be less than a year old, was dropped off at one of their facilities in a non-ambulatory state. Barely able to lift his head and unable to move any of his limbs, it was obvious he needed the kind of compassionate care that only North Shore Animal League America and our Help Me Heal Program could provide. 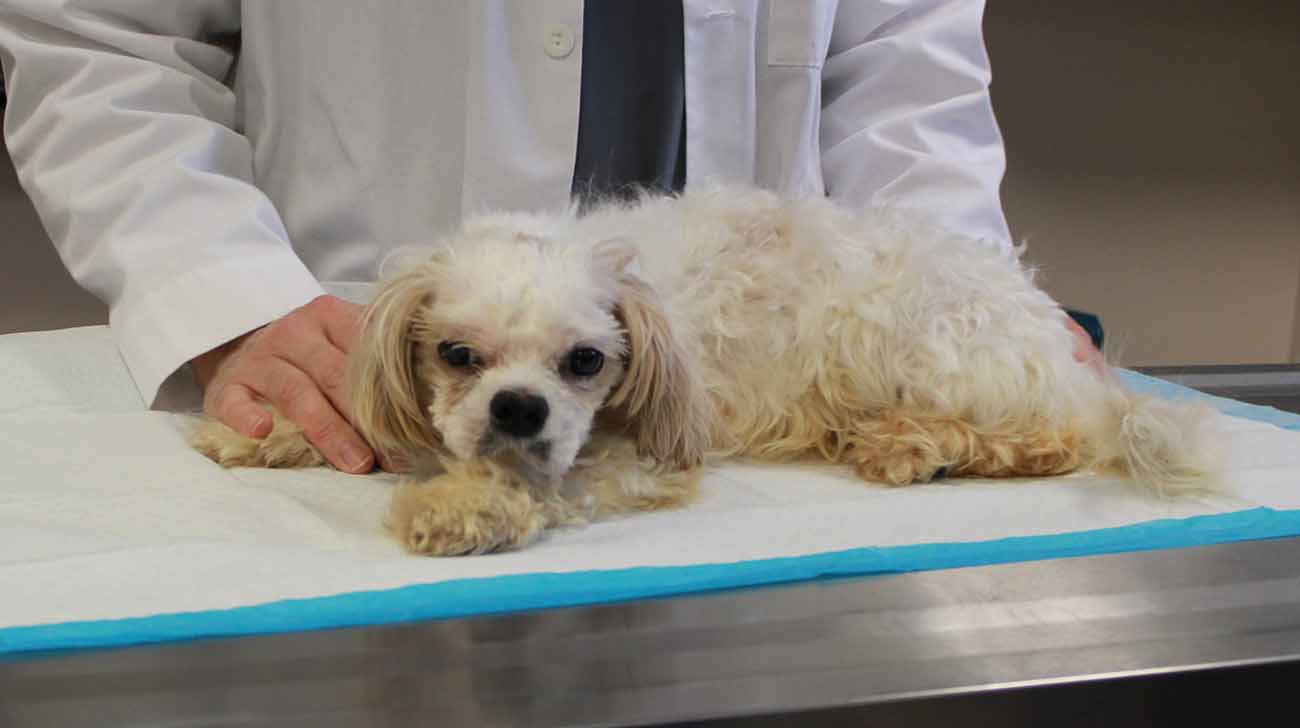 Once inside our Alex Lewyt Veterinary Medical Center, the ailing pup was put through a gamut of examinations and diagnostic testing. The results revealed what Dr. Mark Verdino, Animal League America Senior Vice President and Chief of Veterinary Staff, suspected all along; Yogurt was suffering from the effects of a spinal cord injury.

“We tentatively diagnosed Yogurt with a disease called Atlantoaxial subluxation. What that means is that he’s got instability within the first two vertebrae in his neck, which causes pressure in the spinal cord up in that region and limits impulses going down the rest of the body,” Dr. Verdino said. “While he’s not having any difficulties breathing, sensation in the limbs and some motor function, and most importantly, proprioception, or the ability to coordinate the limbs to make them do the things you want them to do, are affected.”

After an MRI confirmed our original diagnosis, it was decided the only way to give Yogurt a chance to enjoy a healthy, somewhat normal life is with a delicate surgery to stabilize the vertebrae in his neck. According to Dr. Verdino, the hope is that the surgery will allow for him to regain some, if not all of his mobility. For a young dog dealing with such unfortunate medical complications that completely stripped him of his ability to run, walk, or simply bear his own weight, Yogurt’s affectionate, playful personality never waned. This gave our team a little extra motivation to help get this lovable little guy back on his feet. 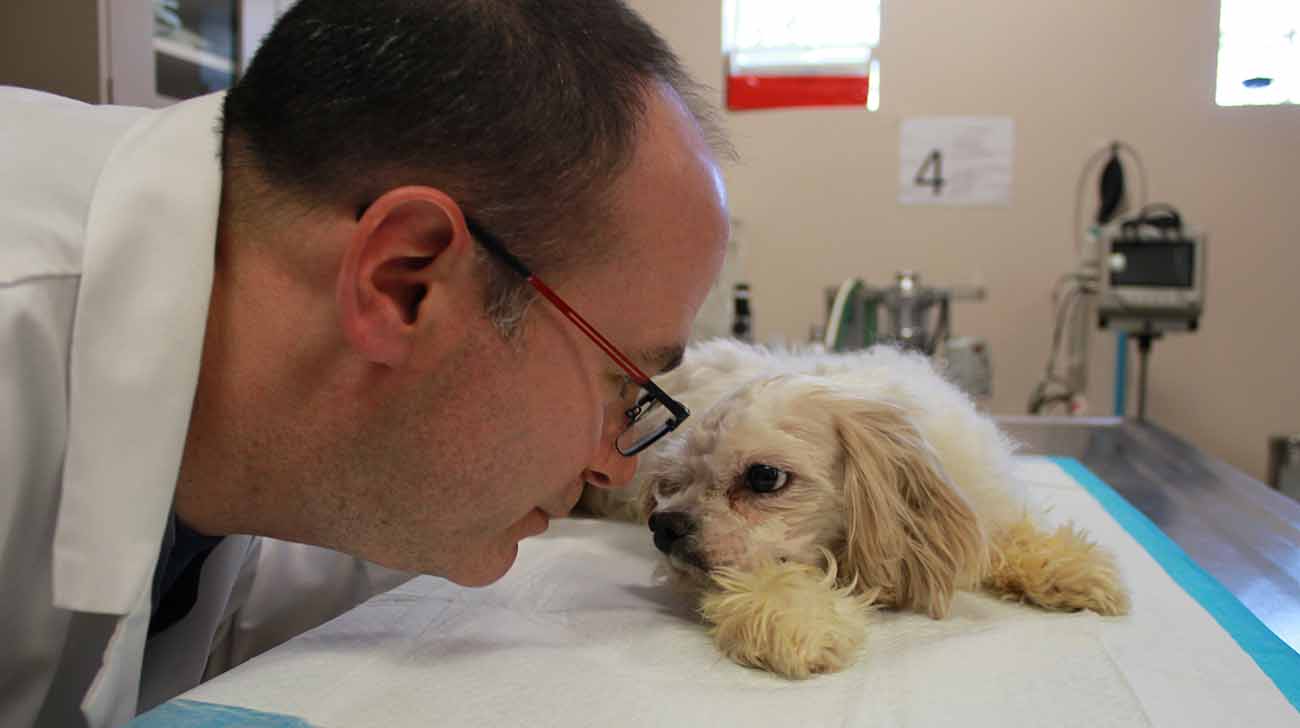 “The board certified surgeons at the AMC (Animal Medical Center) will basically fuse the two vertebrae together in a normal anatomical position, which will take some of the pressure off of the spinal cord. Then it becomes a waiting game to see if the damage around the cord is reversible.” Dr. Verdino outlined the plan “Based on the muscle atrophy we think this has been going on since Yogurt was very young, as a result of a congenital defect or injury, but we’re optimistic that between the surgery and on-going physical therapy here at our campus we’ll be able to have him regain most, if not all, of his mobility.”

Yogurt has undergone the surgery to stabilize the vertebrae in his neck, and is resting comfortably. Doctors have noticed improvement in his motor function, and he is able to bear some weight on his hind limbs. Yogurt’s front limbs also seem improved, though he is not able to bear significant weight on them. His doctor’s noted a bilateral shoulder luxation, that was not evident on previous x-rays, which may require additional surgeries to repair. 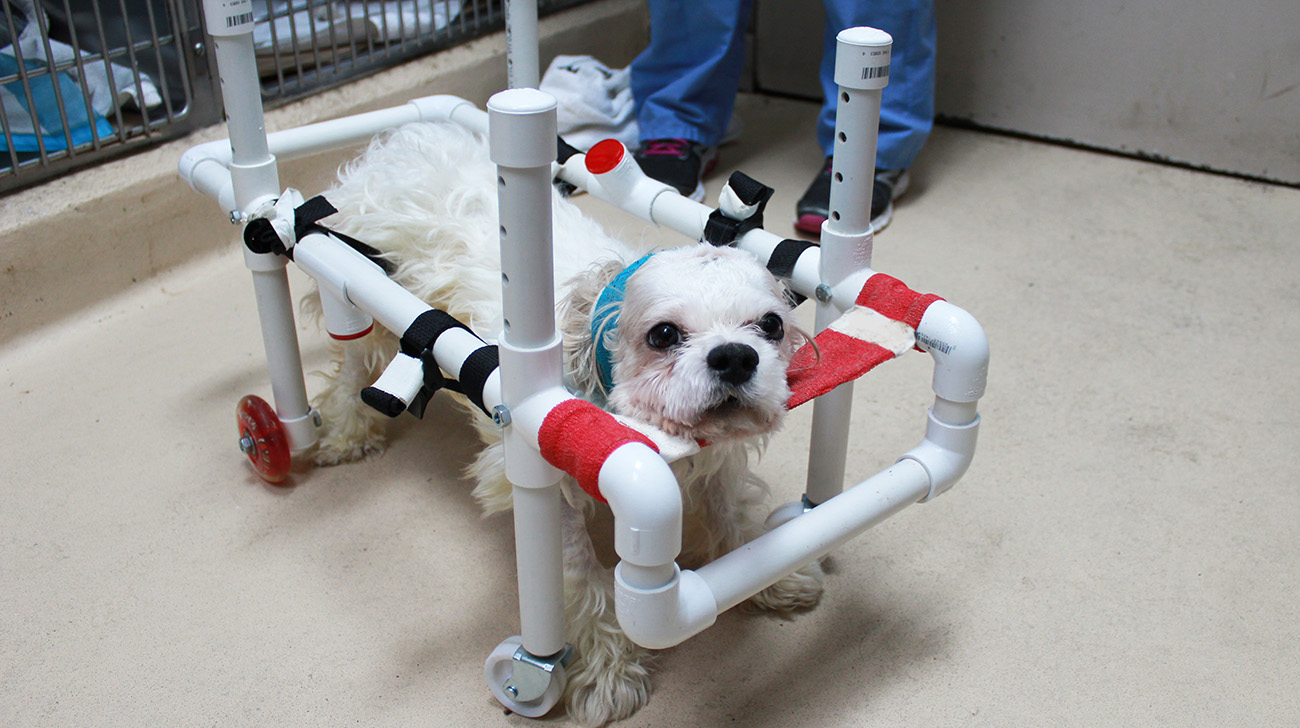 For now, this sweet pup wants to move around and greet his visitors with playful snuggles, but we are keeping him restricted for a few weeks while he recuperates. In the meantime, a quad cart will be available for Yogurt to use to support his front legs while getting physical therapy on his hind legs.

Please continue to support our Help Me Heal Program, where sick and injured animals can get the vital medical care they need to lead happy, healthy, pain-free lives.

Yogurt continues to make great strides in his recovery, thanks to the generous support of our Help Me Heal Program. He recently showed off for our friends at BuzzfeedAnimals in this little video they put together when they visited our Port Washington, NY campus.

As you can see, our little Yogurt is doing great! Yogurt will continue his rehab at our Alex Lewyt Veterinary Medical Center where he is being cared for by our dedicated team. Thanks to all the support of this vital program, Yogurt is well on his way to very happy new beginning.

Yogurt recently left our Port Washington campus as a member of our Foster Care Program. As with all of our foster pets, this little guy is getting some much needed socialization and the chance to learn what life is like in a loving, responsible home. The added bonus, Yogurt is being fostered by a veterinarian who works at the Animal Medical Center in Manhattan. This way Yogurt is able to continue his weekly physical therapy and rehabilitation, without the weekly commute.

Yogurt has responded so well to his physical therapy that doctors believe shoulder surgery will not be necessary. As you can see from this video taken during one of his morning walks, Yogurt has been growing stronger every day, and even keeps up with the big dogs.

This remarkable transformation would never have been possible without the generous support of our Help Me Heal Program. This vital program makes it possible for sick and injured animals to get the urgent care and compassion they need to become the happy, healthy companion animals they were always meant to be. Thank you all for your continued support.