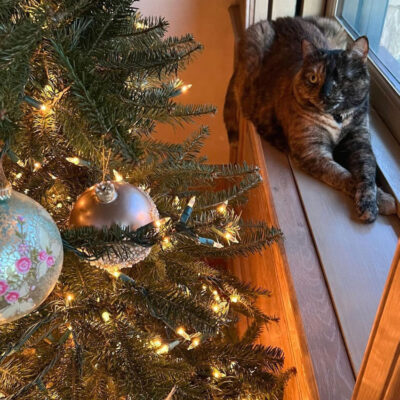 As the last month of the year, December is a very evocative period, calling up memories at the same time it asks us to think about the future. So here are some of 2021’s most memorable rescue stories as well as reasons to hope that the future will be better for animals. And with Covid marring yet another holiday season, our memories and hopes are more important than ever.

I couldn’t talk about 2021 without highlighting Sparrow (below), a beautiful kitten made blind and deaf by callous abuse. She entered my program frightened and lost. Love and patience transformed her from a frightened little soul to a healthy, self-confident cat. I owe special thanks to the fantastic medical care she received from Dr. Jackie and her staff at Long Island Veterinary Specialists. But mostly, it was Sparrow’s own valiant spirit that made the difference. She captured the hearts of everyone before flying off to a loving forever home where she is deeply cherished. I dedicated my entire August blog to Sparrow. I truly will never forget her. 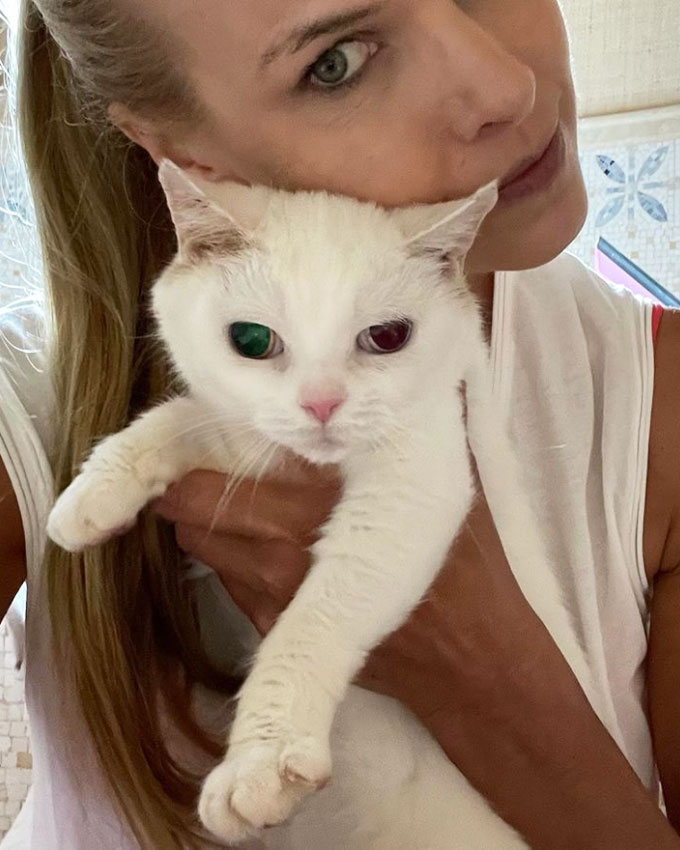 It really is impossible to choose from the 268 cats and kittens I had the honor to care for and rehome in 2021. Each of them has a unique story that touched my heart…and sometimes made me very angry. In the “angry” category was the story of blind, 4-year-old Karlie, (right) cruelly 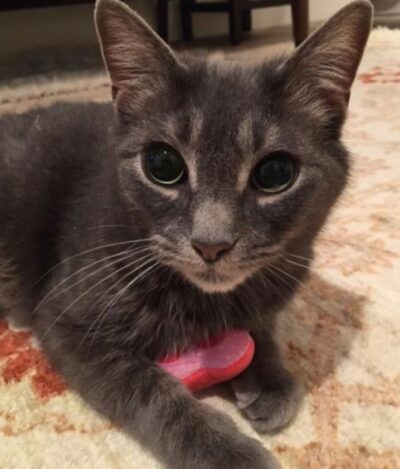 abandoned outside and eventually rescued and brought to me by my colleagues at Animal League America. We think her blindness is the result of a facial trauma, possibly from a car. When her forever family adopted her in March, my heart exploded with joy. It was the fairy tale ending she earned and deserved.

It seemed that 2021 had more than its share of mamma cats and their adorable litters. There was Mamma Soleil, Mamma Florida, Mamma Etta Jane, and Mamma Boots. Perhaps the most poignant was Mamma Cherry Blossom, whose litter arrived just three days after the death of Dignity, a beautiful 15-year-old black cat who was suffering from liver disease and advanced cancer. She and her bonded sister, Destiny, had been adopted as kittens, but when Dignity’s medical needs grew urgent, the family surrendered her. They also gave us Destiny, at our request, so the two could spend Dignity’s last days together. Howard and I welcomed her as our hospice guest, and we loved her until the very end. Shortly after she died on March 23, her sister, now called by her original name, Zoey, was adopted by a loving, experienced family. We think Dignity is truly at peace. 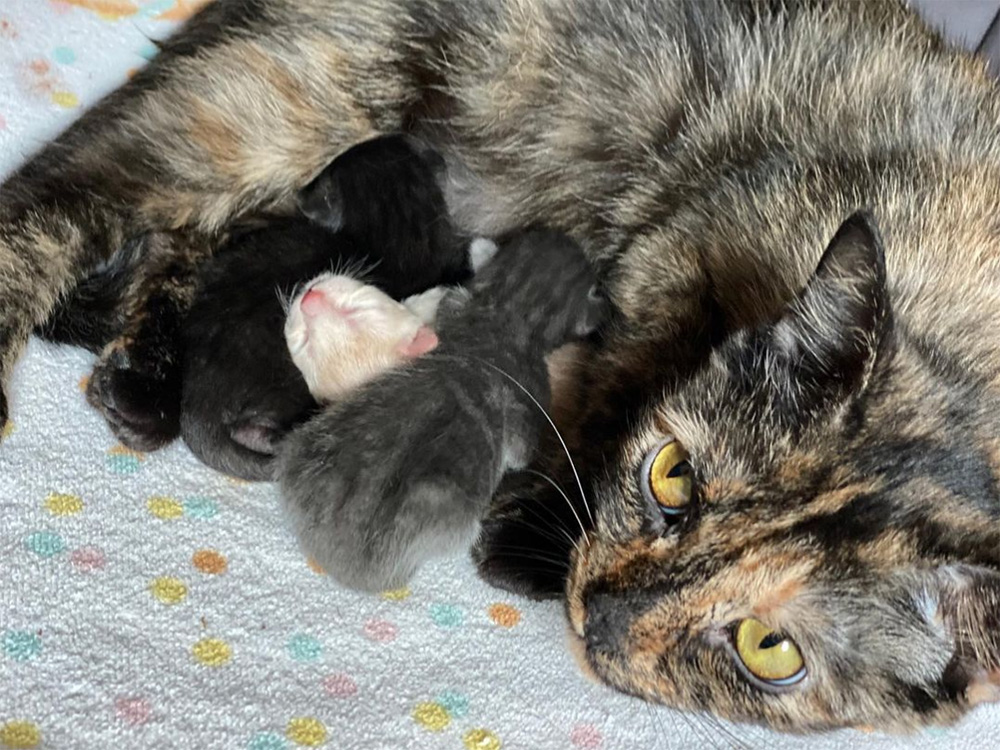 And then Mamma Cherry Blossom (above), a young Tortie, completed the circle of life by delivering three precious nuggets here in our home. I was lucky enough to capture the entire event, all 48 minutes, live for Instagram. I even had to help tug the last kitten into the world when she got a little stuck coming out.

March was a month of highs and lows, with yet another hospice kitty, Zaydee, dying in the care of one of my rescue partners, Lisa and Dave at Dutchie & Renee Senior Cat Rescue @dutchieandrenee. At about the same time, a Tortie stray in my Florida program, Mamma Florida, gave birth to four beautiful, big nuggets. Whew. An emotional rollercoaster. 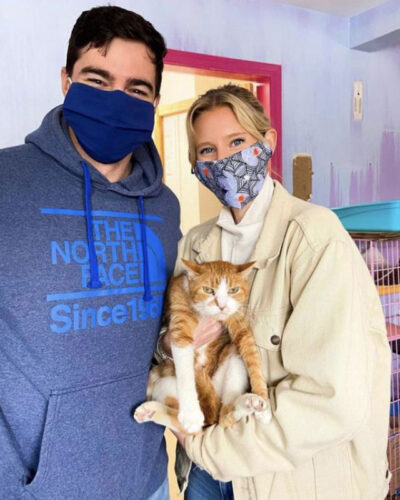 And I will never forget Ringo Starr, the boyfriend I never met. I featured this handsome, marmalade guy in my September blog, hoping to give his story a little boost. At 14 years old, Ringo had spent 26 months at Animal League America, enjoying life in Bianca’s Furry Friends Feline Adoption Center where he was loved, nurtured, and given fantastic IG publicity by staff and volunteers alike. A sweet curmudgeon, Ringo was handling his chronic kidney disease well, but we all wanted Ringo to have a home of his own and people who would love his grumpiness. On October 31, it happened: His long and winding road came to a beautiful end when a young couple scooped him up and carried him off to a beautiful future. (It’s no trick, Ringo. It’s home!)

In early October, the “ringworm kittens,” four, 4-week-old floofs, made an appearance. They were rescued outside and brought to my vet who told me that one of the kittens had a suspicious ringworm lesion on her tail. Ringworm is a fungus, not a worm, the same fungus that causes athlete’s foot. But the issue for me was that it is highly contagious to pets and people, and I had so many fosters and not a single empty isolation room.

I reached out to my IG friends, and a couple who had just lost their cat and had experience with ringworm volunteered to foster three of the nuggets — Cinderella, Gus Gus, and Jaq — and give them the meticulous care they needed. They also set up an IG account to educate people about ringworm and how to care for pets who are diagnosed with this common condition. 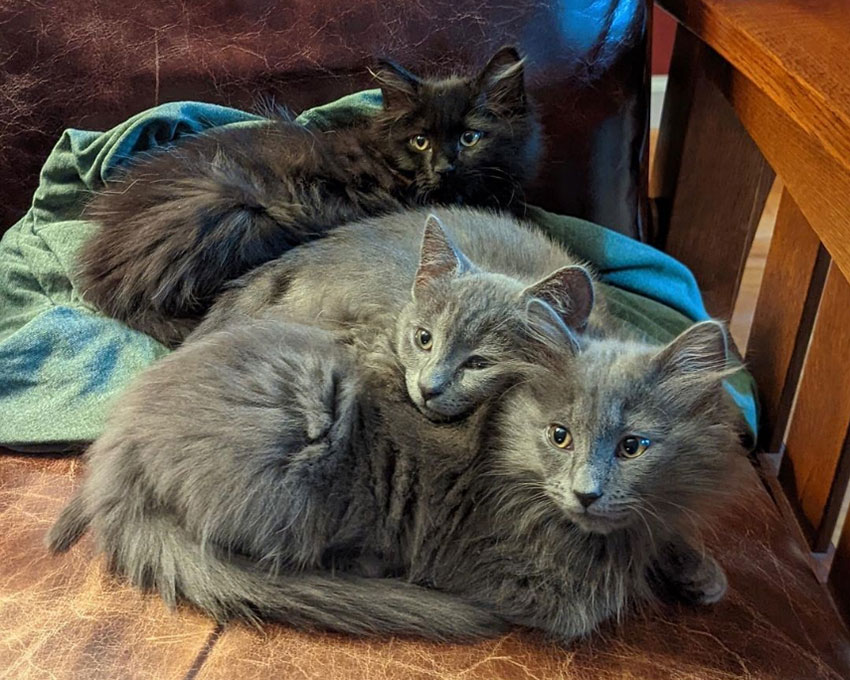 The fourth kitten, the little runt of the litter, was thought to have heart issues and stayed with Dr. Jackie for her expert care.

Perhaps it’s December magic, but I just learned that the three ringworm kittens (left, at their forever home) are completely healthy and are being adopted by their foster parents! And the fourth kitten, Dorian, is being adopted by the woman who found the four kittens to begin with. He does have a serious heart condition and won’t live long but she knows this and is going to love him until his last day.

And now we have our Grogu in our lives. This delightful little Persian — a true “Baby Yoda” — arrived in bad shape, also with a serious heart condition. He looked and smelled ghastly, his fur so severely matted with imbedded feces that he could barely walk. Persian cats require a lot of grooming, and I’m glad whoever owned him realized they just weren’t up for it. 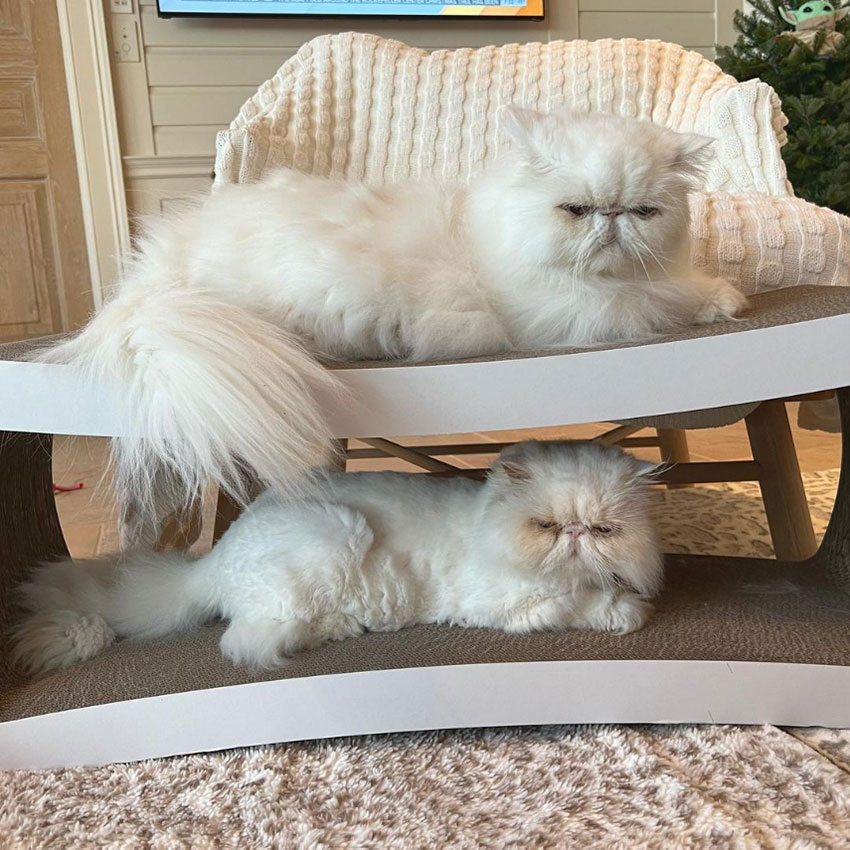 We know that his heart condition means he might not live very long, but we’re hoping that like Yoda, he’ll recover with love and purpose. He is already so much healthier, and he and Yoda have become the most adorable buddies. That they would bond as they have was almost too much to ask for, but it happened, and Howard and I could not be happier. Talk about magic! (Grogu on the bottom, above. We’ve taken to calling them Groda because they are always together.) 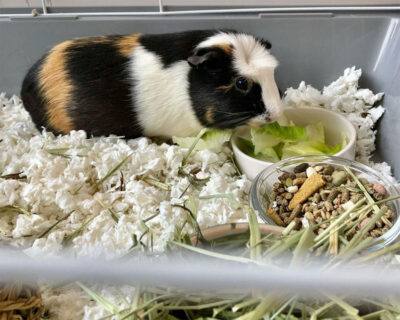 One of the shortest fosters this year was Leslie, an American Crested Guinea Pig. A woman walking her dog in Manhattan found Leslie on a curb in a shoebox amid some trash. She got in touch with me and, as my brothers and I had three Guinea pigs as kids, I immediately said yes! Before I knew it, there was an adorable Guinea pig in our apartment. And then, almost as quickly, Leslie went home with a very experienced woman who informed me that what we thought was a cute cowlick is in fact a crest, the distinguishing characteristic of the breed. Leslie is only about 6 months old, so it’s too early to know if Leslie is a male or female. The adopter thanked Howard for coming up with a name that will suit Leslie either way!

Clearly, I believe that all pets deserve loving homes and happy futures like Leslie’s, Yoda’s, and Grogu’s, which is why I was happy to see that New York recently passed three new laws that will make life better for pets.

All three of these laws reflect a growing recognition of the right of animals to be treated with compassion and dignity. If you live outside of New York, please urge your state legislators to support similar legislation in your state. 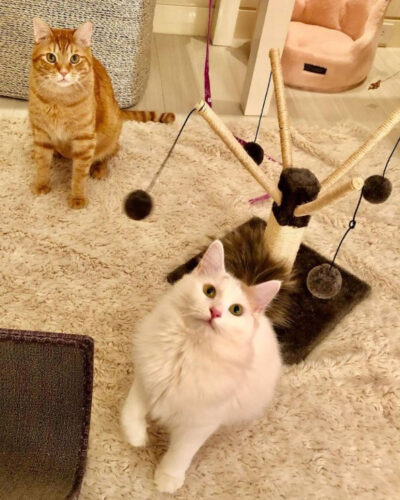 I want to close this blog, and the year, with the story of Lovey and Dolly. These gorgeous two-year-old siblings lost their human unexpectedly, and it was obvious that they were so loved. I want to thank their guardian angel who reached out to me and also send a special thank you to @izzyforever (Chief of Police!) who came through for me when I asked him to get someone into the apartment of the deceased after almost two weeks to save these two precious lives. Teamwork does make the dream work, every time!

The story of Lovey and Dolly touches me deeply, especially at this time of the year, when loss, love, and home resonate with all of us.

Which is why I want to share this photo of the adorable family that adopted these lucky kitties and gave them the nicest new names: Cheddar and Brie. 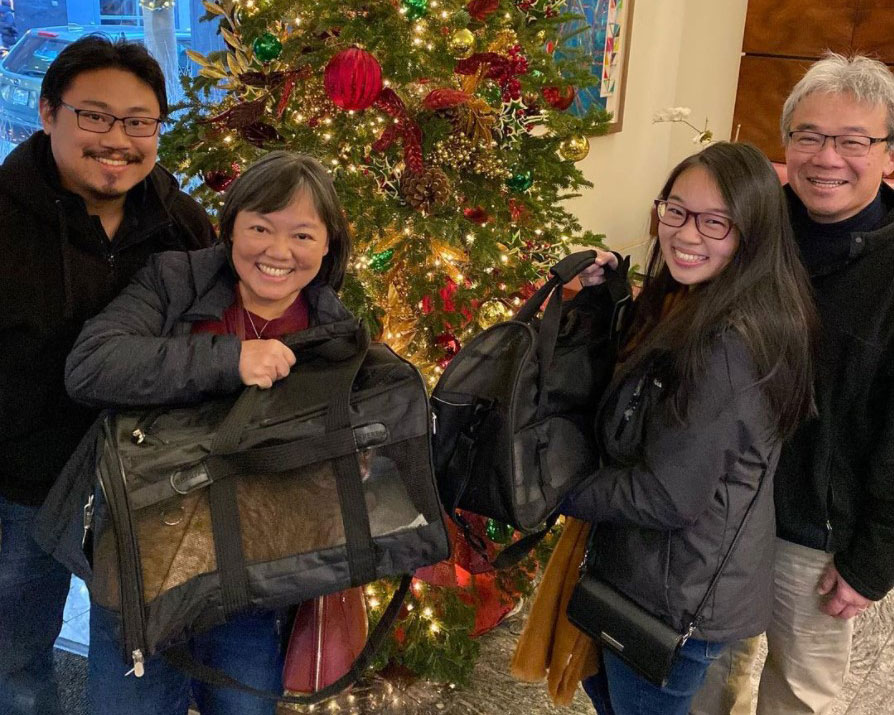 Their beaming smiles are everything!!

With hope in my heart, I wish you a joyous holiday season and a healthy 2022.

P.S. If you’re thinking about providing shelter for outdoor cats this winter, North Shore Animal League America’s Community Outreach Team has put together Cold Weather Tips for Your Feral Friend. This helpful how-to gives expert guidance on the topic and — most importantly — details how to set up and keep your feral shelter safe for those looking for respite from the cold.

P.P.S. And don’t forget how important it is to keep your own pets safe during the cold season. I covered this situation and others in my February 2018 blog.