All They Need is Love…and You!

In the midst of the coronavirus pandemic, North Shore Animal League America, like other shelters across the country, experienced a wave of people wishing to foster or adopt dogs and cats.  However, we also noticed that there was a shift in which types of animals were getting adopted faster — wonderfully, it was those who were often overlooked because they had special needs.

“We believe that these harder-to-place animals were going home more quickly because people wanted to do something good,” said Diane Johnson, Vice President of Shelter Operations. “People were opening up their homes to animals that really needed them. Families had more time to spend with shy or under-socialized pets and felt that they could help them adjust better because they were always around.”

The secret to success in helping these dogs and cats is time, patience, and most importantly, love. They are given time to acclimate in the Adoption Center and make some human friends, who develop relationships with them. Then these neglected animals begin to trust again.

Schwartz, a Chihuahua/Rat Terrier mix who arrived on a rescue transport from Georgia, benefited greatly from our expertise. He’d lived in a backyard breeder situation for more than a year. Backyard breeders, motivated by profit, often don’t provide appropriate care for the animals they house. Animal League America staff had no way of knowing how much handling or attention from people he’d ever experienced. 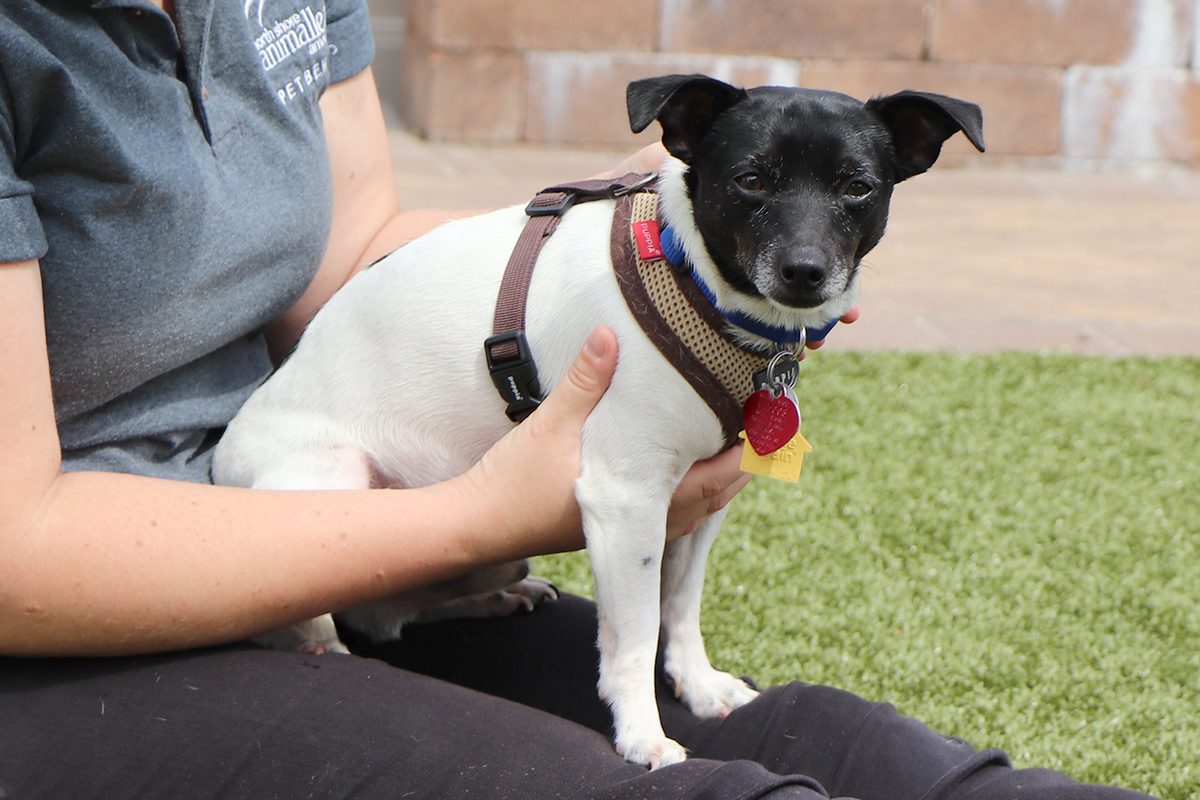 “Because Schwartz was under-socialized with people when he came here, he made you work to be his friend. You needed to spend time with him,” said Sean-Patrick, Shelter Operations Manager. “He needed time to adjust to new people, a new place, and just to trust again.”

As our Pet Behavior Team began to get to know Schwartz, they developed a wish list for his adoption. They discovered that he preferred the company of dogs his own size or, if larger, ones that were timid. Then they found Cathy. She ticked off the boxes of an ideal home with just two adults and one dog, a calm Pug, not much bigger than Schwartz. Cathy and her family came to meet Schwartz, gave him some treats, and he allowed them to handle him during that first meeting. “He was ready and they seemed to be the perfect people for him,” said Sean-Patrick. “This family really fit the needs of this dog.”

Donate today to help more homeless dogs and cats of find a home of their own.

Another canine, Moki, a three-month-old Chihuahua mix, struggled with meeting new people and often barked and became anxious. The staff decided to introduce Moki very slowly to the kennel and to new staff. It took some time. They used a treat cup so unknown people passing by his kennel run could toss him a treat and he could view strangers in a more positive light. Moki needed a quiet home in a suburban or rural neighborhood. Sean-Patrick was able to match him up with Wendi, who lived alone and in an area that wasn’t congested with crowds of people or traffic. 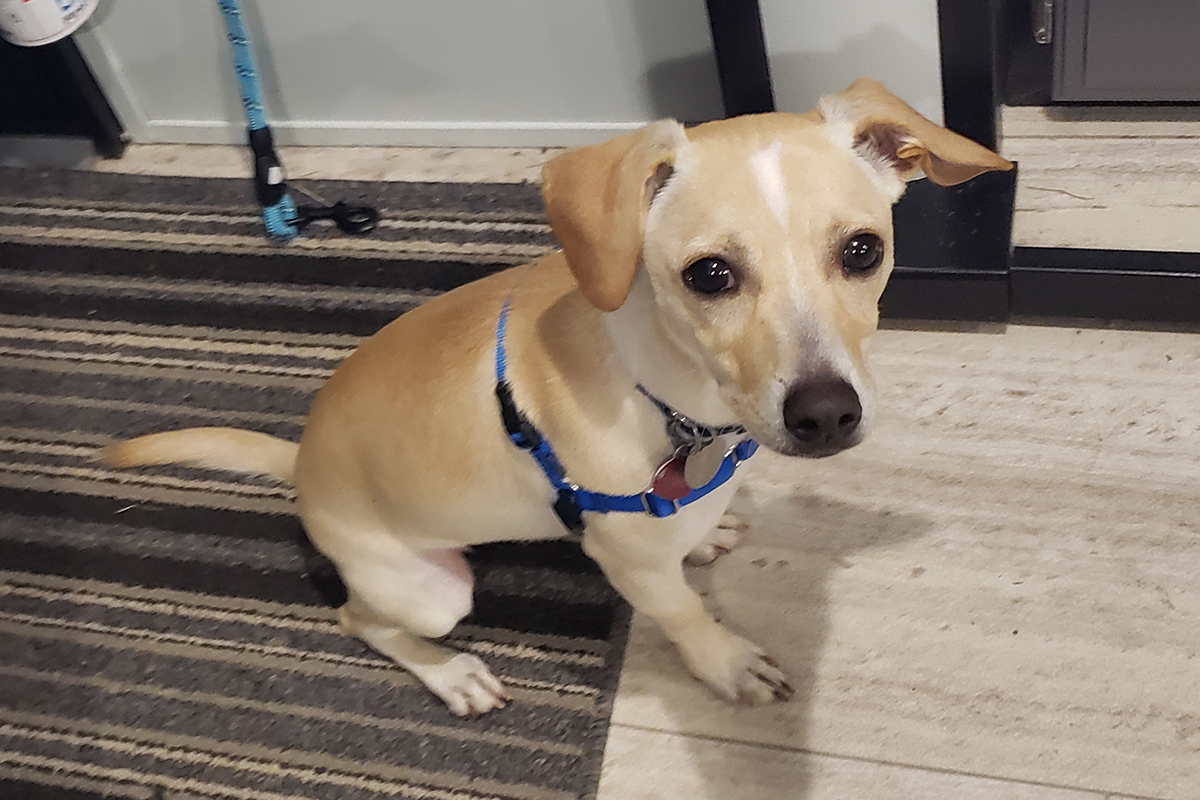 Wendi believes that Moki has come very far in just the first few weeks she’s had him in her home. They enjoy two long walks and two shorter outings together every day. He is interested in the local wildlife and gets very excited when he sees squirrels. “He’s had lots of interactions with people walking by, dogs, and bicycles,” she said. “He still doesn’t like the bikes and is a little wary of people, but now just wants to play with every dog that we pass. It’s going to be a slow process, but I am so proud of him.”

Tim is one example of a rescue cat who was resistant to being touched and very wary of people. He started making progress when Dorit, the Feline Enrichment Manager, employed positive reinforcement. Treats motivated Tim and helped get him more comfortable with strangers, especially if they were joined by someone familiar to him in his cage-free room in Bianca’s Furry Friends Feline Adoption Center. With the staff and volunteers, he became so at home that he allowed full body pets and ear rubs. 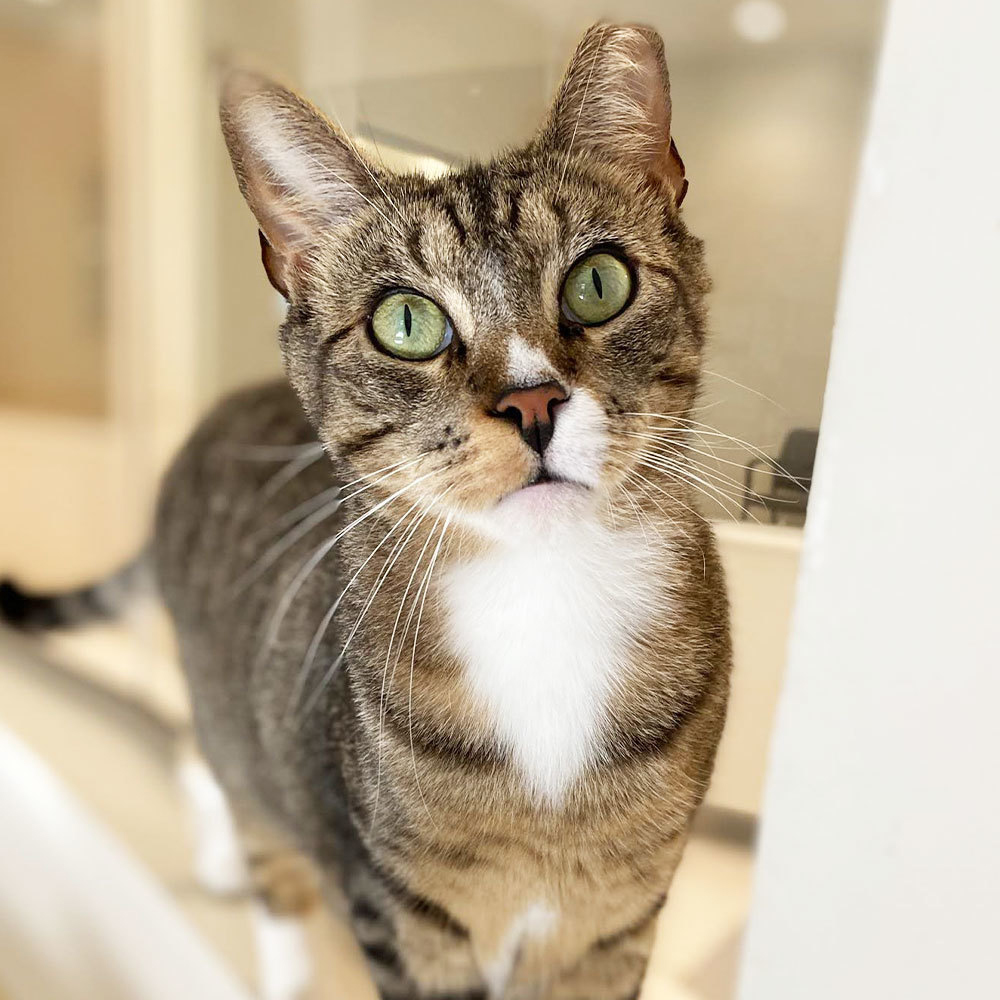 This new confidence enabled Tim to respond to Fanny when she came to us looking to adopt a second cat. She decided he would be the perfect one to add to her family, fully aware that he might take time to get comfortable in her home.

At the beginning, he mostly stayed in his covered bed and began eating his food when it was placed right next to him. “Tim lets us pet him now, of course, with treats,” said mom Fanny. “He’s also playing with us now, but doesn’t quite want us to be too close yet.” 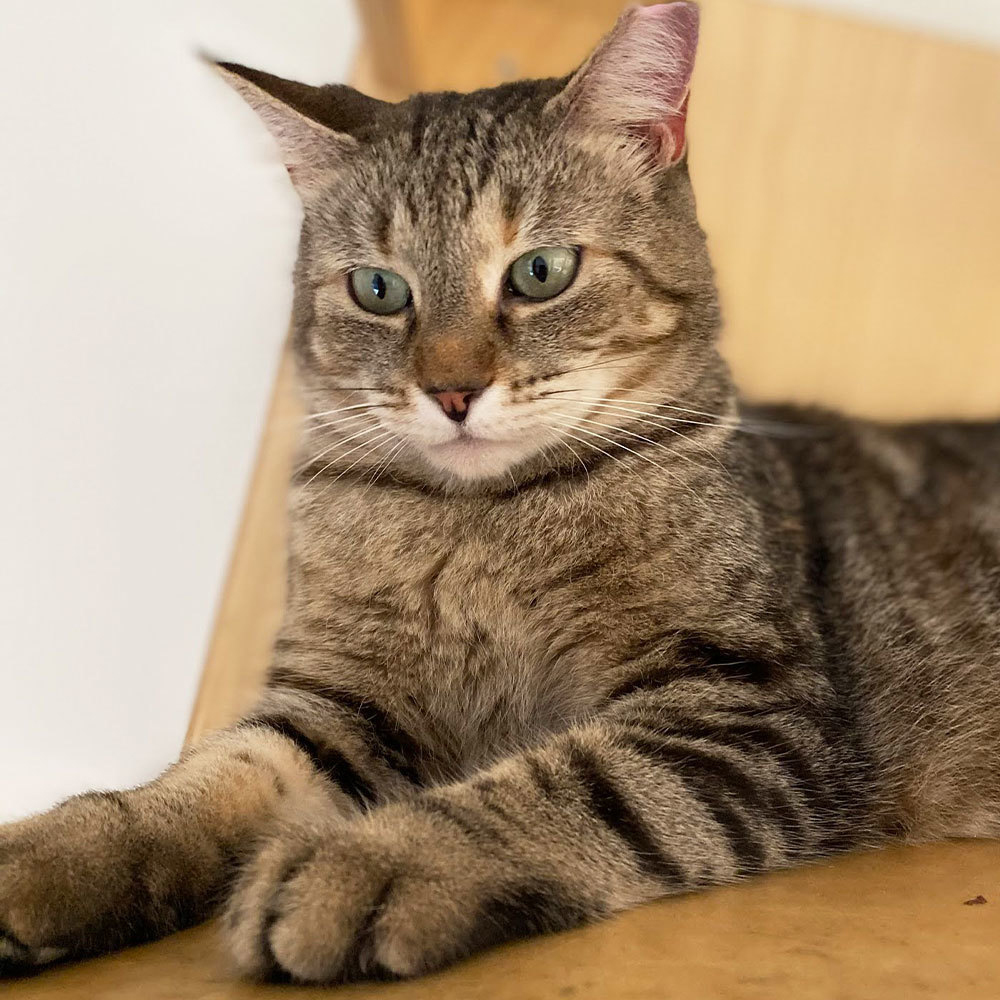 Ava, another cat who found herself at our Adoption Center, reacted very differently than Tim. While Tim would hiss and run away from strangers, Ava would just find one safe place in a room and not move at all. She needed time to acclimate to her new accommodations before beginning to come out of her shell.

It turned out that Ava was also very treat focused. “It’s amazing that Ava came from being frozen in fear to today when she will nuzzle you and purr. And she now has human friends,” said Dorit. “We’ve been able get to know these cats and give them ample opportunity to come along at their own pace. We want them to be successful in their new homes so we give them as much time as they need here.”

Another secret to a pet’s adoption success is… YOU, and all of North Shore Animal League America’s friends. Thank you!