By now most of us are aware of the tragic devastation suffered by the people of Puerto Rico and the surrounding areas at the hands of Hurricanes Irma and Maria. The catastrophic storms tore through the area, wiping away homes, business and shelters, crippling the economy and cutting short the lives of too many innocent humans and animals. Since then North Shore Animal League America has taken part in the relief efforts, providing several of our shelter partners in the area with a safe haven for so many animals, who would otherwise have no place to go.

As Puerto Rico continues to slowly recover, Animal League America has also stood steadfastly by in order to assist in any way necessary. Recently, we collaborated with Save A Gato, a non-profit organization based in Old San Juan, which dedicates its rescue efforts to saving the lives of the cats of the old city. Irma Podesta, a volunteer and public relation representative of the organization, reached out to our Rescue Team in hopes we could open our doors to several homeless kittens in desperate need. 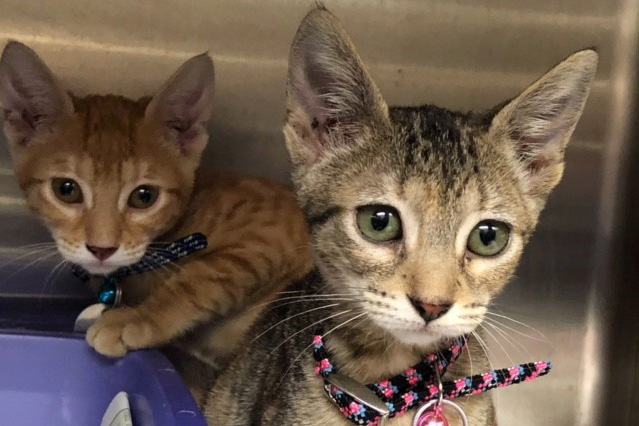 “Unfortunately, adoptions on the island after the hurricanes are non-existent, and our PetSmart and Petco centers haven’t re-opened yet. This has made everything harder for our organization. We are now on our lowest adoptions ever. We have so many adoptable cats/kittens that could be enjoying a loving home rather than be out on the streets,” said Irma. “Currently in San Juan and in Puerto Rico overall, we are facing high abandonment and low sterilization rates. The current economic climate is not very positive and many residents are moving to the states and abandoning their pets in the process. We try our absolute best to find loving and responsible homes for our adoptable cats, but the feline population far supersedes the families looking to adopt.”

Without hesitation, our Rescue Department organized the transport of eight older kittens, all ranging from six to nine months old, to our Port Washington, N.Y. Adoption Center, where they will receive everything they need to find the perfect homes. These kittens have been fighting for a happy, healthy life since they were born into a world of chaos and disaster, but now they are safe and sound in the care of the world’s largest no-kill rescue and adoption organization. Although these kittens are now living the lives they were always meant to live, it doesn’t mean our work in Puerto Rico is finished. We need your support to continue to be able to improve the lives of dogs, cats, puppies, and kittens from all over the world. With your help we will continue to do everything in our power to be there for the people and animals of Puerto Rico, as well as those right here in our own backyard.